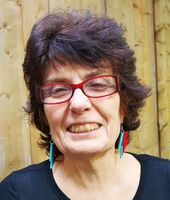 Susan Perly's Giller Prize-nominated Death Valley drew comparisons to everything from Twin Peaks to Alice in Wonderland for its dark humour and compelling beauty. So her follow-up, Stella Atlantis (Wolsak & Wynn), had big shoes to fill. Luckily Perly was well up to the task and has created another gift for readers with her trademark wit, heart, and boundary-pushing on display.

Stella Atlantis focuses on Johnny Coma, the estranged husband of Death Valley's heroine, Vivienne Pink. Johnny has a tough task ahead of him: to convince Vivienne that their late daughter has returned from the dead... as a talking octopus.

The deliciously absurd premise may make Perly's deft gift for writing grief and love surprising, but she manages to combine humour with deep and genuine empathy for her characters to create something authentic, fresh, and moving.

We're excited to welcome Susan back to Open Book today to talk about Stella Atlantis as part of our Long Story interview for novelists. She tells us about the "little lighthouse" in Barcelona that saw the first spark of the book, why it was important to move from the desert to the sea after Death Valley, and the meaning behind her Shakespearean epigraph.

Barcelona, late October 2015. I walked my daily walk to the sea, from the tiny stone alley where I stayed to the open Mediterranean. The backlit sea light so vivifying. Palm trees, sailboats, people like shadows. Like a fiend of routine, for years I had walked the same route along the shoreline. That day, I swerved, walked the opposite way, past the tennis club, the surf school. A café appeared on the sand. Bright blue cushions with the café name in Catalan – El Petit Far (The Little Lighthouse.) Still early for morning coffee in Barcelona – 10:30 a.m. – ­ I sat down, ordered a cortado, pulled out my Moleskine notebook, a pen, and I began to make my chicken scratches on the cream page. My nerve endings were singing a duet with the nerve endings of a character: he was grieving his murdered child, Stella, he was writing her a letter, putting it in a bottle, giving it to a surfer. Thus, my new novel began. Kismet is tricky. If I had never swerved that day, would I have heard the voice of the bereaved dad? Would Stella Atlantis even exist if I had kept walking my same old lovely way?

The setting chose me. I had been in the desert – literally and in my imagination, while I wrote Death Valley. After an immersion in arid optics, I craved blue mind. We’re mostly water when we’re born, we lose our water as we age. We’re bereft of the ocean and seas. My wrists craved water words, my writerly self kept picturing my characters from Death Valley removed from three per cent humidity to ninety-three per cent humidity. Barcelona sits at sea level on the Mediterranean. Amsterdam is below sea level, saturated with canals and golden art lamplight. Toronto my hometown on the lake, so humid.

The swerve from dry to wet, from earth to water felt like a new fresh music.

Stella, the talking octopus. I could write her a letter: Dear Stella, I love you because you arrived as a surprise from the abyssopelagic deeps, the water world. I love you because you’re the answer to the question, 'Is there intelligent life in other spheres?' Yes! You embody, with your nine brains, your three hearts, your beak like the street, everything fresh, forward, sassily prophetic. Stella, the alien intelligence, with arms that can taste, smell, discern, play pranks. Who knew an octopus could arrive to a seaside coffee joint in Barcelona, like the ultimate homage to Catalonia there ever was? I love you, because you returned from the dead to solace your grieving father, and you kvetched while comforting him. You were great company, dear Stella; my book is a letter in a bottle sent to you so you can read it and be okay that you died. You love Robert Mitchum in Out of the Past. My girl. And hats, and Tadoussac in chilly foggy summer. You can hear the mystery clicks of whales sailing up the Saguenay into the grand St. Lawrence. Stella, the talking mollusc, my antic role model.

Mornings, I scribbled Stella Atlantis. I needed a diversion in the afternoon. So, I immersed myself in a big book I’d never read, Miguel de Cervantes’s Don Quixote. Oh boy, now this was fiction. Pure pleasure, pure treasure, so hilarious, heartful. I quickly read past the slight scene early in the book where Quixote tilts at windmills. But wait: on page eight hundred and sixty-one, Don Quixote and Sancho Panza sail into – Barcelona! Talk about strange. To escape writing harbour scenes of Barcelona, I’d headed directly into Barcelona harbour – in Don Quixote! To get a break from the intimate alleys of the Medieval barrio where I’d set the beginning of Stella Atlantis, I found myself with Quixote and Sancho Panza strolling that very barrio. Whoa, now they were on the sand, by the Mediterranean waves. On the very same patch of beach where I’d gone for my morning coffee, and where I’d invented Stella the octopus crawling out of the sea to chat up her grieving father, Don Quixote was fighting a duel with the Knight of the White Moon.  Quixotes loses the duel, suffering his greatest defeat. Quixote has the blues and gives up his grand quest. Yet, he is unexpectedly tender towards Barcelona, the city that broke him. I needed to be more obsessed, and more tender. I wrote Quixote and Cervantes into Stella Atlantis. I let my scars take the lead.

The book’s epigraph, "There is a world elsewhere," is from Shakespeare’s play Coriolanus. We do yearn for more. We yearn for elsewhere. Maybe forever, maybe just to go away, in order to come back home. (And then dream again of going away). We crave a place of enchantment. Stella the octopus appears from a mysterious 'elsewhere' to solace her grieving father. Is the elsewhere the afterlife? Maybe. Is the elsewhere the sea? Could be. We know so little about creature life in the oceans, the abyssopelagic. Eternal night on the sea floor hosts magnificent worlds we barely know. Three of my characters set sail into the Atlantic for solace and adventure. Fresh eyes sailing into the ghost notes. Vivienne Pink, the photojournalist, Johnny Coma, the novelist, the art-welder and political fixer Alexi Green, Dulce the homeless woman, Sancho the ragtag man in the public square, all reach for something better, conversation, connection, art objects they might offer to others for healing, even if they can’t heal themselves.

Susan Perly is a fiction writer, former radio journalist, and war correspondent. She is the author of the novels Death Valley and Love Street and her short stories have appeared in numerous magazines and anthologies.

In an earlier life chapter, Perly reported for CBC Radio from conflict zones, such as the Iran-Iraq War in Letters from Baghdad, from the Guatemalan refugee camps of the Mexican jungles, and from Argentina and Uruguay during their military regimes. In the 1980s she was part of an international commission investigating the torture and disappearance of journalists and artists in those countries. Her on-site engagements in the fields of tyranny have informed her fiction. Perly lives in her hometown Toronto with her husband, poet Dennis Lee.

With the dead you can go anywhere.

When novelist Johnny Coma's daughter comes back from the dead as a talking octopus, will he be finally be able to write her story? Will his estranged wife, renowned war photographer Vivienne Pink, even believe him? In Stella Atlantis, the stunning follow-up to her visionary desert novel Death Valley, Susan Perly returns to the lives of these troubled artists, haunted by the death of their young daughter, Stella, killed on the sidewalk outside their home, as they search for healing in separate cities and with new lovers.

Moving in and out of Toronto, Amsterdam and Barcelona, across the Mediterranean to Ibiza and out to the Canary Islands in the Atlantic Ocean, Perly’s prose enacts grieving itself in the twinned stories of Johnny and Vivienne. Playfully dark and filled with beautiful flights of imagery, this is a story of fathers and daughters, of love lost and love reborn, of the redemptive power of art, the transformative power of the sea and how we can dare to reach for radiance and redemption.