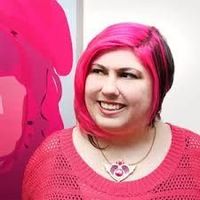 Violet, the title character in author Christine Baldacchino's delightful new picture book Violet Shrink (Groundwood), feels uncomfortable and anxious in large groups. While the rest of her outgoing family enjoy loud, boisterous parties, she prefers the simple comfort of a book and her favourite purple headphones.

At big gatherings, Violet finds secret places where she can let her vivid imagination run wild. The darkened space under a kitchen table becomes a wide, blue ocean. A tall staircase turns into a tree where Violet the snake can curl and slither. With the Shrink family reunion coming up, however, Violet realizes she must tell her dad what's really going on. As she and her father work on a solution together, her feelings of anxiety are validated and accepted.

Featuring striking, beautifully-rendered illustrations by Carmen Mok, Violet Shrink is a tender, heartwarming tale which not only opens a needed dialogue about mental health, but provides a window into the rich inner lives of introverted kids.

In Christine's Dirty Dozen series, where authors share twelve facts about themselves that others may not know, she discusses an inspiring childhood visit by Robert Munsch, one song she can't write without, and which toppings you should never, ever, put on her hamburger.

2. I’m a big fan of anime, namely Sailor Moon and Cowboy Bebop. I love that Sailor Moon’s perceived flaws would often become sources of her strength. I love that she celebrates being a romance-obsessed, stuffed animal-collecting, videogame-crazed fourteen-year-old girl. Over the course of the series, Sailor Moon matures, but she invariably refuses to change the essence of who she is, what she likes, and who she loves for anyone.

3. Don’t put lettuce, onions or tomatoes on my burger – if it’s cold and wet, I don’t want it!

4. When I was about four I heard the song Save it for Later by the English Beat for the very first time. It’s been my favourite song ever since. Sometimes when I’m writing, I’ll still leave it on repeat in the background, probably driving the neighbours out of their gourds.

5. When I was in senior kindergarten, Robert Munsch visited my school and read The Paperbag Princess and The Boy in the Drawer to us. I was so damn excited - I thought he was Jim Henson. It was the beard, I think.

7. I still sleep with my childhood teddy bear, Junior. Both Morris Micklewhite and the Tangerine Dress and Violet Shrink are dedicated to him. Say what you will, but that bear has been my protector and my best friend since the moment I first laid eyes on him…moments after my younger sister received him as a Christmas gift. She was too little to know it, but I swear she got a good trade for Junior – a beautiful, shiny children’s pram and a brand new baby doll. Fair exchange and no robbery, I say.

8. My favourite film is Back to the Future (1985). As far as I’m concerned, it’s absolutely perfect. The other two films, however, are crimes committed against sequels, threequels, and cinema in general. Another movie that’s a massive favourite (no pun intended) that I don’t often tell people about unless I’m positive they have a great sense of humour is Russ Meyer’s Mondo Topless (1966). The soundtrack is awesome, and John Furlong’s narration is absolutely hilarious.

9. Violet Shrink inspired me to create my own grownup blanket fort in my current home. I’m curled up in it right now as I type this. It’s the best gift I could have given myself, to be honest. It really does feel like I’ve somehow managed to give real life the slip when I’m in here.

10. About fifteen years ago I was diagnosed with Bipolar Disorder II and ADD. It was such a relief to finally be told that all the trouble I’d been having in life wasn’t because I was “lazy, stupid or crazy.”

11. My favourite children’s book is Corduroy by Don Freeman. Galldarnit, I LOVE that bear. My favourite grownup book is I’m with the Band: Confessions of a Groupie by Pamela Des Barres. Maybe the best memoir I’ve ever read (with Bob Geldof’s Is That It? coming in at a close second).

12. I’ve put in an almost embarrassing number of hours into Elder Scrolls Online and The Sims. When I think of how many books I could have written by now…oh, sheesh. Don’t do that to yourself, Christine!

Christine Baldacchino is a former graphic artist and web designer with a background in early childhood education. She is the author of the Stonewall Honor recipient Morris Micklewhite and the Tangerine Dress (Groundwood, 2014) and Violet Shrink (Groundwood, 2020). She lives with her husband in Toronto, and loves blue raspberry-flavoured slushies, and ballet flats (though not for eating).

Violet Shrink doesn’t like parties. Or bashes, or gatherings. Lots of people and lots of noise make Violet’s tummy ache and her hands sweat. She would much rather spend time on her own, watching the birds in her backyard, reading comics or listening to music through her purple headphones. The problem is that the whole Shrink family loves parties with loud music and games and dancing.

At cousin Char’s birthday party, Violet hides under a table and imagines she is a shark gliding effortlessly through the water, looking for food. And at Auntie Marlene and Uncle Leli’s anniversary bash, Violet sits alone at the top of the stairs, imagining she is a slithering snake way up in the branches.

When Violet learns that the Shrink family reunion is fast approaching, she musters up the courage to have a talk with her dad.

In this thoughtful story about understanding and acceptance, Violet’s natural introversion and feelings of social anxiety are normalized when she and her father reach a solution together. Christine Baldacchino’s warm text demonstrates the role imagination often plays for children dealing with anxiety, and the power of a child expressing their feelings to a parent who is there to listen. Carmen Mok’s charming illustrations perfectly capture Violet’s emotions and the vibrancy of her imagination. A valuable contribution to books addressing mental health.