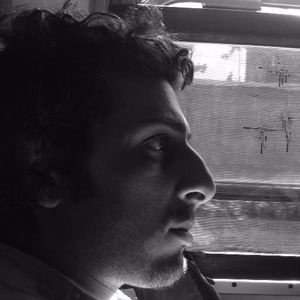 Moez Surani's ةيلمع Operación Opération Operation 行 动 Oперация (BookThug) is a book-length poetic examination of the violent evolution of language used in naming military operations, deconstructing titles that range from "grasshopper" to "bone breaker". The collection is both political and conceptual, stripping down euphemism and doublespeak and forcing the glossy violence of language to show its true self.

Given his unique title and the collection's own focus on military titling, Moez is a perfect fit for our interview series celebrating complex, unusual, fascinating titles, the Entitled series. He talks to us about ةيلمع Operación Opération Operation 行 动 Oперация, telling us about the UN-related origin of the title and why an English-only title wouldn't have worked, some of his own all-time favourite titles, and yet another show-stopping title he's got up his sleeve for a project in progress.

This book is titled حملة Operación Opération Operation 行动 Oперация. It’s “operation” in the six official languages of the United Nations. Since the poem is multilingual and international, a title that was purely in English wouldn’t work. I like that that word repeats in the title and then, in the poem itself, it’s absent, but is the unspoken refrain linking together sixty years’ worth of violence.

That it captures the spirit and magnitude of the work. This could mean that it’s oblique (such as Munro’s The Bear Came Over the Mountain) or boldly direct, like Rankine’s Citizen.

I like the title “Realpolitik.” I used this for a lyric poem in my first book. It’s an unusual word, and for me it has a specific, brutal charge to it. That poem was about the diplomatic brinksmanship between the U.S. and Iraq, and an overlooked effect of it. While the two countries were trading belligerent messages and positioning themselves and their allies, children in Iraq who weren’t equipped to handle this linguistic stress were self-harming by banging their heads against cement.

I’ll give two. One is Bas Jan Ader’s In Search of the Miraculous, a performance piece where he sailed solo across the Atlantic. I like that it’s a large title with some loft to it. He disappeared though at some point on this trip, which changes the title, taking the triumph out of it and infusing it instead with grief and metaphor. A second title, much more succinct, is Alice Oswald’s Memorial. I like how her title frames the highly rhetorical, stylized deaths in the Iliad as actual and worthy of solemnity.

When I thought it would be a poem that was about ten pages long or so, I referred to it as Guernica. Then, as it grew, the working title was The Operation Project. But I wanted a title that embodied what to me are two crucial aspects of the poem: that it’s multilingual, and that it’s the result of an inadvertent collaboration between 193 countries. The title I’ve chosen implies both of those things.

An art installation with my friend Nina Leo, and with the help of the Institution of Art and Olfaction in L.A., titled A Wall Isn’t Broken Patiently Piece by Piece, but Rather with One Decisive Blow. We’re using custom-made scents to critique media and language.

Moez Surani has travelled, studied, and worked in countries around the world. His writing has been featured in numerous publications, including the Best Canadian Poetry (2013 and 2014), The Walrus, The Globe and Mail, Harper’s Magazine, and PRISM International. His first poetry collection, Reticent Bodies (Wolsak and Wynn), was published in 2009. In that same year, he won a Chalmers Arts Fellowship, and later, attended artists’ residencies in Italy, Finland, Latvia, Switzerland, Taiwan, and Canada. His second poetry collection,Floating Life (Wolsak and Wynn), was published in 2012. ةيلمع Operación Opération Operation 行动 Oперация, Surani’s third book, was a finalist for 2014 Les Figues Press Book Prize.

From poet-provocateur Moez Surani comes ةيلمع Operación Opération Operation 行 动 Oперация—a book-length poetic inventory of contemporary rhetoric of violence and aggression, as depicted through the evolution of the language used to name the many military operations conducted by UN Member Nations since the organization’s inception in 1945.

With ةيلمع Operación Opération Operation 行动 Oперация, Surani draws from two poetic traditions—conceptual poetry, with its appropriation and filtration of language and its methodological focus on establishing rigorous constraints from which poems develop and emerge; and inventory poems that aggregate small parts into larger, inferred meanings. In so doing, he achieves two important aims: On the one hand, he shows that no word is free from connoting violence—where “tulip” and “grasshopper” are equal to “killer” and “bone breaker,” no word is inherently innocent, beautiful, or good. On the other hand, he provokes people to consider whether their personal values match the values of the military operations that are conducted by their countries, often in the name of protecting and/or representing those same citizens.

By pulling military language away from euphemism—effectively, making it account for its doublespeaking ways—ةيلمع Operación Opération Operation 行动 Oперацияdocuments the chasm that exists between these two sets of values, and gives voice to the many lives lost in conflicts around the world, in a volume that will speak equally to lovers of contemporary poetry, language, and linguistics, as to readers interested in politics, international relations, and public discourse.