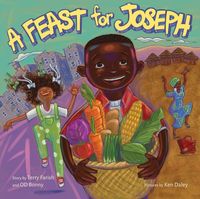 Sharing food is a powerful connection, and one that Joseph, the young hero of Terry Farish and OD Bonny's A Feast for Joseph (Groundwood Books, illustrated by Ken Daley) misses a lot.

Joseph used to share meals with lots of people back when he was in the refugee camp, listening to the joyful sound of the awal drum, but in the city now, things are very quiet. He invites anyone he can think of to come for dinner, but no one has time. Joseph stays hopeful though, making sure he's ready with supplies in case anyone can turn up. And his faith is soon rewarded, showing the power of food to bring people together and even make a strange place feel a bit more like home.

A Feast for Joseph is a heart-warming, powerful story, anchored by an inspiring and relatable protagonist and buoyed by Daley's joyful artwork. We're excited to welcome all three of the creators of this special book to Open Book today.

In a spirit of collaboration that Joseph would appreciate, the three creators have come together to take our "Dirty Dozen" challenge, which asks writers and artists to share twelve unexpected facts about themselves. Together, Terry, OD, and Ken each share four facts, from secrets about hidden library books and patched-up cassette tapes to special memories of homemade toys and butter sculpture triumphs.

For even more bonus content, you can check out original music by OD Bonny, who, like Joseph, grew up in a refugee camp. The piece features the awal drum that Joseph references in the book and acts as a perfect soundtrack for the story.

Terry Farish is an author of picture books and young adult novels, many influenced by her trip to Kakuma Refugee Camp in Kenya and work with the Red Cross in Vietnam. The Good Braider won the New Hampshire Literary Award and the Lupine Award. It was also an ALA Best Book for Young Adults and a School Library Journal Best Book. Joseph's Big Ride, illustrated by Ken Daley, received a Skipping Stones Honor, and The Cat Who Liked Potato Soup, illustrated by Barry Root, won a Bulletin for the Center of Children's Books Blue Ribbon. Terry lives in Kittery, Maine.

OD Bonny is a writer, producer, and songwriter, as well as an artist of traditional Acholi music and dancehall/Afrobeat. He was born in South Sudan and fled to Uganda with his two older brothers, where they lived in Kyangwali Refugee Settlement. In 2003, they moved to the United States. OD attended the University of Maine in Orono, and he began composing and singing traditional Acholi music. He has toured all around Canada, the US, Australia, and Ireland. This is his first book. He lives with his family in Omaha, Nebraska.

Ken Daley is an illustrator who draws inspiration for his work from his African Caribbean roots. He has illustrated: Joseph's Big Ride by Terry Farish, which received a Skipping Stones Honor Award for International Multicultural Books, and Auntie Luce's Talking Paintings by Francie Latour, an Américas Award Honor Book and a Kirkus Best Picture Book about History and Tradition. He has exhibited his art in Canada, the United States, and the Caribbean, and his work can be found in numerous private collections. Ken lives in Cambridge, Ontario.

A Feast for Joseph

Joseph misses sharing meals with lots of people like he did back in the refugee camp, so when the neighbors finally come over, it’s a feast! A companion book to Joseph’s Big Ride, described in Kirkus as “a joyful, upbeat tale.”

When Joseph and Mama lived in a refugee camp in East Africa, everyone cooked and ate together. And Joseph could always hear someone playing the awal. It’s much too quiet and lonely in his new home. Though Whoosh, the girl who lives upstairs, is friendly, Joseph misses having more people around, especially his grandmother, who still lives across the ocean. So he invites his relatives in the city to come for dinner, then he invites his teacher, then Whoosh and her mami — but everyone is too busy.

Ever hopeful, Joseph picks the last greens from the garden. At least he and Mama will be ready to cook if someone comes. The next night Whoosh and her mami appear at the door with a big cake, and Whoosh and Joseph cook up a feast.

A touching story about adjusting to a new home and the pleasure of cooking and sharing food with friends.