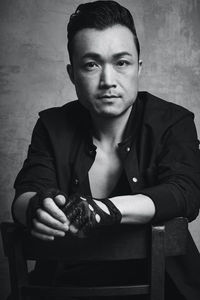 In the age of social media and lives lived partially online, the issue of free speech is perhaps more heated than ever. When Isabelle, a film professor, creates an unmoderated online discussion for her students, her intentions are good. But when hate speech appears on the board, she's left to grapple with whether an experiment in dialogue is worthwhile once civility disappears. When things go from bad to worse, leaving Isabelle and her wife in danger than extends beyond the screen, Isabelle is pushed to take action.

This complex exploration of freedom, hatred, anonymity, and the internet is the story of Norman Yeung's award-winning newest play, Theory (Playwrights Canada Press, available for pre-order now and publishing in 2021). Timely, raw, and wise, Yeung's characters take audiences into uncomfortable spaces, pushing at the divisions within progressive politics and asking questions where no easy answer exists.

We're excited to welcome Norman to Open Book today as part of our On Stage interview for playwrights, where we ask about the unique process of writing for the stage. He tells us about the steps in his writing process and how they become "almost ritualistic"; why, when all else fails, "showers = solutions"; and how he sees (and works to support) theatre evolving to be more collaborate and inclusive.

I write my first drafts with a black, BIC Cristal ballpoint pen, on three-hole punched, ruled paper. I prefer pen and paper because of the liberation, that my pen nib can scrawl out any word or even morph into a doodle (which I don’t do, but I know I can); the possibilities are limitless, whereas a keyboard still restricts me to twenty-six letters. I enjoy the tactility, like the pen, my hand, and my arm are an extension of my mind, making ideas physically real. This free-flowing approach, with minimal censorship, feels like playing, which serves my imagination well for a first draft. When I transcribe my first draft into word processing for the second draft, I enter the deeper, critical-thinking phase of editing. The delete key becomes my best friend. This transition from cursive to typing is almost ritualistic for me, and is a big deal in my process. The book Fundamentals of Play Directing, by Alexander Dean and Lawrence Carra, suggests two types of artists: creative (writer, composer, choreographer etc.) and interpretive (director, musician, dancer etc.). I feel like my first drafts are the domain of my creative side, and subsequent drafts involve more of my interpretive side as I am working with existing material from that point on. For me, transitioning from one artistic sense to the other, from first to second drafts, is like crossing the Rubicon. My writing is also heavily influenced by my craft as an actor, which is primarily an interpretive artistic role. And yes, I often read my lines out loud to myself.

My first full-length play, Pu-Erh, is about a Chinese-Canadian immigrant family where the parents don’t speak English well, and their son doesn’t speak Cantonese well. Indeed, this play is rooted in my own family dynamics with language. Through magical realism, the characters are finally able to speak the same languages with new layers of comprehension and nuance. I didn’t anticipate that after Pu-Erh I would return to this conceit, but in 2020 alone I’ve written two new works (The Zoonotic Story and I Know I’m Supposed to Love You) that revel in magical realism to explore how characters can – and cannot – speak the same language. I have a feeling my language barrier with my own parents is going to be a creative source my entire career. My family dynamic is very loving, by the way. In case you were wondering.

Along with exploring language barriers, I always seem to gravitate towards stories of people becoming famous for unexpected or tragic events. Like, becoming a celebrity through happenstance. Sadly, this notion usually comes from terrible news stories, like a victim of bullying becoming well-known from posting videos about their ordeal, or the parent of a missing child getting thrust in the spotlight for a barrage of press conferences. I always wonder how that exposure weighs on them, or changes them, and how they might be able to seize that amplification to control their own narrative. Ultimately, I’m continually curious about the distortion between public and private life, how one invades the other. This is definitely a theme in my play Theory.

I sit on my sofa, melting into prostrate, and think hard for hours. Literally just thinking. I also have showers. Changing my sensorial state with water yields endless epiphanies. If shampooing, I’m basically conjuring ideas by massaging them out of my brain. Seriously, showers = solutions. If none of those work, I sometimes remember that I’m an actor and I should ask the most basic question: What’s this character’s objective?

Theatre is collaborative at its core, even as elemental as one performer and one spectator collaborating on an experience together. I write knowing full well that other artists will be interpreting my words. I’m usually minimalistic with my stage directions because I want the directors and designers to contribute their vision, and I write punctuations merely as suggestions, knowing that actors will largely discard them. My greatest joy is seeing my words brought to life by others. When I was a younger artist, I yearned to become a realistic dramatist like Chekhov, but I’ve since written a number of plays where the narratives require projections or interactive technology. As multimedia, multi-disciplinary, cross-disciplinary performances abound, the opportunity for collaboration is enhanced. I’ve recently created a show (I Know I’m Supposed to Love You) with director/deviser Daniela Atiencia, where the very premise of the story was revised to support the holistic vision. My creative process was expanded beyond my usual habits as a playwright. Try as I might to steer myself toward writing kitchen sink dramas for three characters (the reality is, this could be easier to produce), I’m instead veering toward my newest play called Eunuch v. Pirate that spans seven centuries, has dozens of Chinese characters including a 15th Century eunuch and 18th Century pirate, has at least one sea battle, and will probably require puppeteers. Instead of kitchen, I’m going carnival. One major reason for writing this epic play is to welcome Chinese people to theatre in Canada. To offer them a reflection of themselves. If our zeitgeist is advocating inclusion, diversity, decolonisation, decentralisation, and collaboration, then theatre and theatre-making will follow in content, form, and practice. Playwrights like me who rely on dramaturges, directors, and actors to supplement the writing process know that we don’t practise our craft in isolation. And now, there seems to be more opportunity to embrace playwriting as a community effort. Which is the most elemental approach of all: creating peformance for and by a community.

Norman Yeung’s play Pu-Erh was nominated for four Dora Mavor Moore Awards, including Outstanding New Play, and was a Herman Voaden National Playwriting Competition finalist. He was at the Stratford Festival Playwrights Retreat in 2019 to write his new play, Others, and is acting at Stratford in 2020. Acting credits include Resident Evil: Afterlife, Todd and the Book of Pure Evil, Chimerica, and The Kite Runner. He holds a BFA in Film (Ryerson University) and a BFA in Acting (University of British Columbia). Norman lives in Los Angeles and Toronto.

Is there a limit to free speech? Who gets to decide?

Isabelle’s film theory students are stunned that she would open an unmoderated online discussion group to complement a controversial syllabus. Her intention was for them to learn from each other, but when an anonymous student starts to post racist comments and offensive videos on the forum and others challenge Isabelle’s methods, she is forced to decide whether to intervene or to let the social experiment play out. But the posts soon turn abusive and threatening to Isabelle’s relationship with her wife, Lee, causing her to take matters into her own hands.

In this thrilling exploration of the intersections and divisions within liberalism, a young tenure-track professor finds herself in a high-stakes game of cat-and-mouse that has her questioning her beliefs and fighting back for her life.