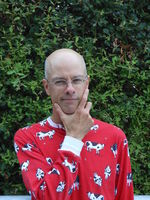 Tim and his dog Tuffy are best friends and love spending time together - including watching Tim's favourite show, Ultra Dog. Tuffy isn't threatened because he has nothing to worry about... right? Just as he's starting to worry about his best pal adoring another dog so much, Tuffy finds out Tim is taking a trip to Ultra Land. Tuffy becomes determined to best his rival for Tim's affections, and the 'battle' is a surprising, sweet, and funny one.

We're excited to welcome Troy to Open Book today, where he tells us about his new book by discussing its title for our title-obsessed Entitled interview series.

He tells us about the long and iconic kids' book title that is his all-time favourite, the importance of an exclamation mark, and what he's up to next.

Titles have many functions, but the two main ones are a) to grab attention, and b) to fit with the content. Of the two, I feel the latter is more important. It’s not super-difficult to come up with an attention-grabbing title, but if that attention-grabber doesn’t fit with the content, then you risk failing readers in two ways. Some readers will be disappointed that the content doesn’t keep the false promises made by the title. And other readers will stay away entirely because those promises just aren’t their cup of tea, even though they might have actually enjoyed the mismatched content within.

My favourite is The Sinking of Captain Otter, published by Owlkids and illustrated by Maira Chiodi. Originally, I wanted the title to be simply Captain Otter, because it was inspired by a little book called Captain Otter that I wrote and illustrated in Grade One. But the folks at Owlkids asked me to send them more title options – and thank goodness they did! As a title, The Sinking of Captain Otter retains the ‘Captain Otter’ connection with the Grade One book, while at the same time adding an element of intrigue and excitement. The poor little captain gets mercilessly mocked during the first part of the story, and readers will think, “On top of all this mocking, he’s going to sink, too?! Oh no!” The sinking is, in fact, the big turning point in the story, and it happens in a very unexpected way. And – semi-spoiler alert – it happens a lot more than just once.

Alexander and the Terrible, Horrible, No Good, Very Bad Day.

This book began as an illustrated story in Chickadee magazine back in May, 2007 (12 years ago!). The little dog was then named William, so the story was called "William vs Ultra Dog". For the book version, I renamed the dog Tuffy, so the title became – surprise, surprise – Tuffy vs Ultra Dog. But the folks at Owlkids asked me to suggest some other title options. And while I did suggest several non-versus options, the suggestion of mine that they ultimately chose was Dog vs Ultra Dog. It’s kind of a take-off on the classic forms of conflict I first learned about in my Junior High English classes – Man vs Nature, Man vs Man, Man vs Society, etc (and yes, the word ‘man’ should obviously be replaced by ‘human’ – or better yet, ‘protagonist’).

By the way, I did consider Underdog vs Ultra Dog, but I didn’t send that to Owlkids as one of the options, because a character named Underdog already exists. Plus, I like how the word ‘dog’ is shorter and smaller than the word combo ‘Ultra Dog,’ which communicates the underdog-ness of Tuffy in a different – and, in my view, better – way.

To be honest, the image, font, and overall design have far more bearing on whether I’ll pick up an unfamiliar book. And once those factors have gotten me to pick it up, compelling pull-quotes of praise will determine whether I delve deeper, not the title.

Having said all that, I do like clever, witty, and/or artful titles.

A picture book featuring a cat that is much kinder than the cat in Dog vs Ultra Dog. The influences for the book include three picture books (The Cat in the Hat, Waiting for the Whales, and Big Cat, Little Cat) one grandfather, too many cats to count, and a certain non-feline animal I probably shouldn’t mention just yet. It has a great title (but it may have a different – and even greater – title by the time it’s in print).

Troy Wilson is the author of The Sinking of Captain Otter, Liam Takes a Stand, and other picture books. Dog vs Ultra Dog began as a Chickadee magazine story, and is Troy's first superhero book since the highly acclaimed Perfect Man. He lives in Victoria, British Columbia.

Tim loves his pet dog, Tuffy, and Tuffy adores his boy. Tim also happens to be an überfan of the TV superhero Ultra Dog: he watches the shows, reads the books, plays the video games, wears the cape, and even sports Ultra Dog underwear. Despite cajoling from the neighboring cat, Tuffy has absolutely no fear that Ultra Dog is stealing his boy. Ultra Dog is too famous to want a regular boy…right?
Just in case, Tuffy tries extra hard to be super obedient and to outdo Ultra Dog with his love for Tim. But when Tuffy hears about Tim’s upcoming trip to Ultra Land, the faithful pup is officially afraid of losing his boy. What’s a dog to do? Fight back, of course! Tuffy enacts a plan to beat Ultra Dog once and for all, and the reward is unexpected—but awesome. Packed with comics-style storytelling, visual cues, and action, this is a great pick for reluctant readers, dog lovers, and superhero fans alike.