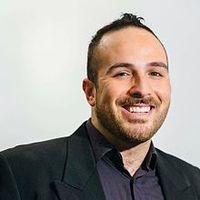 Hasan Namir's debut collection, War / Torn (Book*hug), was one of the most buzzed-about books of poetry in the spring 2019 season for good reason; Namir's lucid, visceral examination of masculinity and religion, war and violence, and love and sex is bold, beautiful, and heartbreaking in the best way.

Namir is known for his Lambda Award-winning novel God in Pink, and War / Torn proves he has just as much to offer in poetry as in prose.

We're incredibly excited to announce that Hasan will be joining the Open Book team as our October 2019 writer-in-residence, bringing his insightful, witty, and timely observations to our site for the month.

Get to know him today through our Poets in Profile interview below, where we ask poets about their process, formative experiences with poetry, and more. Hasan tells us about how poetry runs in his family, picks the (very long!) "poem" he wishes he had written, and pinpoints the most important part of a poem. And be sure to stay tuned to our writer-in-residence page in October to hear more from Hasan.

I never met my grandfather but growing up, my father used to tell me that my grandfather (his father) used to write some of the most beautiful poetry. When I realized how much I love poetry, I knew that that poetry runs through my blood, being passed on by my grandfather.

I remember I was seven years old, living in Baghdad, Iraq at the time, and I remember picking up a book of poetry by the Syrian poet Nizar Qabbani. The book was called Love Shall Remain My Lord and the words really touched me. I was so moved by them. They inspired me and then, I knew I loved poetry so much. His poetry was lyrical and filled with emotions. The Arabic language is so complex and evocative. It can transcend you to places with a single expression. I will never forget Qibbani’s poetics.

As a huge fan of Shakespeare, I see each of his plays as one big poem. I wish I wrote Macbeth, my favourite Shakespearean "poem" of all time.

When I write poetry, I usually have thematic ideas in my mind. Sometimes, these thematic aspirations are ignited after I wrote like five or six or even seven poems. My poems tend to complement one another. I usually have an idea or two that serve as the backbone of a poetry collection. Then, when I write the poems, I tend to surprise myself because either the idea is developed further or the poems allude to other themes.

I don’t scrap a poem that isn’t working. Instead, I would rework it. I would sleep on it for a few days. Then, I find myself channeling new creative ways that I couldn’t think of before. The way I see it is if the poem isn’t working, then it’s best to keep it aside for some time and come back with fresh perspective.

I believe the way the poem ends because the last few words are what resonate with me the most when I read a poem.

The best thing about being poet is that you have this artistic freedom with words and space (form) where you are not restricted. When I write poetry, I feel limitless and free. The worst part about being a poet is that poetry books attract smaller readership than fiction. Also, a lot of publishers refuse to publish poetry unless the author is established and well-known. That’s why I’m thankful for Jay and Hazel Millar (Bookhug Press) as they continue to be the pioneers in Canadian poetry publishing.

Hasan Namir was born in Iraq in 1987. He graduated from Simon Fraser University with a BA in English and received the Ying Chen Creative Writing Student Award. He is the author of God in Pink (2015), which won the Lambda Literary Award for Best Gay Fiction and was chosen as one of the Top 100 Books of 2015 by The Globe and Mail. His work has also been featured on Huffington Post, Shaw TV, Airbnb, and in the film God in Pink: A Documentary. He lives with his husband in Vancouver.

Lambda Literary Award-winner Hasan Namir’s debut collection of poetry, War / Torn, is a brazen and lyrical interrogation of religion and masculinity—the performance and sense of belonging they delineate and draw together. Namir summons prayer, violence, and the sensuality of love, revisiting tenets of Islam and dictates of war to break the barriers between the profane and the sacred.