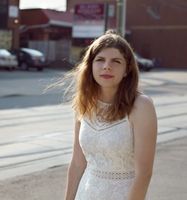 Jess Taylor's 2015 collection Pauls announced her as an innovative, creative, and fearless voice in Canadian short fiction. This fall she returns with a new book of stories, the memorably named Just Pervs (Book*hug), which has been praised for both its stylistic sophistication and its refreshing, frank, and nuanced depictions of sexuality and female desire.

From sex addicts in love to adolescent explorations of burgeoning desire, these stories have drawn comparisons to the likes of Mary Gaitskill for their wisdom, boundary-pushing, and elegant prose.

We're excited to welcome Jess to Open Book today to talk about Just Pervs through our Keep it Short interview series, where we ask short story writers about their process, the genre, and more.

Jess tells us about the pleasure of getting to re-visit recurring characters in multiple stories, discusses the freedom and even healing that can be contained in writing short stories, and shares the moving story behind the collection's sweet dedication.

For Just Pervs, the title of the collection came first. In 2015, I was doing a reading of "The Stink", which is about a world in the grips of a smelly heatwave, no real feelings, and only sex. My friend and I would joke about it being for Just Pervs, that I was done with writing about Pauls and onto Pervs. I made the joke at that reading, still not serious about the title. Eventually, like with all of my jokes, it became real, and Just Pervs formed.

Then the stories I had written, "The Stink" and maybe one or two others, became the first stories for Just Pervs. Everything else I wrote at the time was with Just Pervs in mind, and I threw away stories that didn’t quite fit. The stories were all written from 2014-2018, with most written 2015-2016.

I’m a project-based short story writer, so I wrote Pauls in a similar way. I’ve been writing a few stories since 2018, and I’m not sure what project they’ll be for yet, but I’m sure it’ll reveal itself soon.

After I had the title, I knew I wanted to have a story called "Just Pervs". The story of the Pervs came out of that title — these four girls in high school who are united by their obsession with sex. In general, I think that story does encapsulate the collection because the girls are exploring and struggling with their friendships, loss, their desire, and their sexuality. I also think it works to represent the collection because of the brutality within that story.

The main characters in the book are all women, and they are all trying to tease out their feelings and opinions about sex, intimacy, and desire and the relationship these things will have throughout their life. For many of these characters, there is an aspect of desire that remains untapped and frustrated.

Several of the characters recur throughout the stories as well. I like feeling like I don’t have to be done with a character once I’m finished a story... that I can see what they’re up to at another point in their life. We follow Kylie and Sam throughout their friendship, and some the Pervs pop up again as well.

I love the process... when you start really going with writing, it feels like flying, like nothing can touch you. For me writing drafts is also a very emotional act; I feel with my characters and really inhabit their headspace. That’s healing for me.

I also love editing, as I feel it uses the problem-solving, analytical side of my brain. Rearranging pieces of a sloppy draft and restructuring it is incredibly satisfying.

I think dealing with self-doubt and fear of failure are the hardest parts for me, battling myself and that little voice in all of us that says, I can’t. And then, after it’s done, publicity and promoting my work is challenging for me and hard on my mental health. I don’t feel as comfortable being the focus and I’m afraid of being judged. I try not to let that fear filter into the writing process, but then it comes on strong after it’s published. I’m lucky that I have a lot of friends and family who are supportive of my work — the people in my life make things easier.

I did do some research, but it was more for ideas than to have stories that were extensively researched. I was researching hypersexuality and came across this chapter of a sociology text, “Hypersexuality in an 80-Year-Old Woman” in Extreme Sexuality in Women by G.D. Masters. This inspired one of the stories.

I also came across articles and new stories related to sex, mostly sent by a friend at the time. One was about a woman catching her husband with their dog through a video leaked on iCloud, which inspired another story in the collection.

The dedication for Just Pervs is "To my friends." I’d always written these stories with my friends in mind, hoping to make them laugh and feel and relate. In February 2018, I also had a major accident that left me hospitalized for a month and a half and with extensive limited mobility for close to nine months. During this time, I felt my friends really rallied around me — they brought me coffees and food, came to visit, took care of my cat, watched shows with me, took me out, brought me to vote, lent me books, helped me get to and from work, and so many more things. I really appreciate the kindness everyone showed me. It made me feel better about humanity as a whole, and it was really a special experience to have had — to feel cared for in that way. Thank you, friends.

Jess Taylor is a Toronto writer and poet. She founded The Emerging Writers Reading Series in 2012. Pauls, her first collection of stories, was published by Book*hug Press in 2015. The title story from the collection, “Paul,” received the 2013 Gold Fiction National Magazine Award. Jess is currently at work on a novel and continuation of her life poem, “Never Stop.” She lives in Toronto.

Two sex addicts meet and fall in love. A woman catches her husband cheating on her with their dog and escapes to her sister’s horse farm. Four friends—fellow pervs—grow up and drift apart, pining for each other in silence until one of them is murdered.

In Jess Taylor’s sophomore story collection, contemporary views of female sexuality are subverted, and women are given agency over their desires and bodies. Through these characters, sex is revealed to be many things at once: gross, shameful, exhilarating, hidden or open—and always complicated. Reminiscent of the works of Maggie Nelson, Mary Gaitskill and Chris Kraus, the stories in Just Pervsexplore the strange oppression and illumination created by desire, the bewilderment of adolescence, and the barriers to intimacy both discovered within and imposed upon ourselves.