Today in my series on poetry prompts and exercises, I'm featuring writer Kathryn Mockler. She teaches creative writing, poetry, and screenwriting at Western University, and runs private workshops through her new online writing school Mockler’s Writing Workshop. She has had six short films produced and is the author of the poetry books The Purpose Pitch (Mansfield Press), The Saddest Place on Earth (DC Books) and Onion Man (Tightrope Books). Currently, she is the Toronto Editor of Joyland and Publisher/Founder of The Rusty Toque.

When I first started writing, I used to get really stressed out if I couldn’t think of anything to write. I would beat myself up and fret and go blank. It was horrible. But over the years, I have learned that those moments, which seem like they are not productive because I’m not actually writing anything, are just part of the process. I’d like to say the fear goes away, but it doesn’t. Writing anything new or anything I am stuck on always makes me feel like I’m jumping off a cliff. I’ve just learned how to cope with it better.

I’m in a situation right now where my husband, David Poolman, and I are collaborating on a book. I’m writing poems and little fictions and he’s doing the artwork. The deadline is in a couple of months for an art opening. I would be lying if I said this didn’t make me a little tense. But rather than freak out like I used to, I will try following some of these strategies:

a) Daily freewriting or journaling: When I’m feeling blocked, I write for a set period of time (ideally in the morning) where I don’t think about what I’m writing, and I don’t criticize it. I just write for 15 to 30-minute blocks. This is not meant to produce good work but rather to clear my mind. Often in the clearing of my mind, I get ideas but not always. Sometimes I just vent or rant. This process always makes me more productive later in the day.

b) Reading: Before I set down to write a poem or story, I read poetry or short fiction. I don’t necessarily read the kind of work that I am writing, but I read something that I think will get me excited about writing.

c) Collaborating: Working with a friend can help get ideas flowing. This past summer, poet and novelist, Gary Barwin and I did a back and forth collaboration where we used titles and/or words or phrases from each other’s poems to write new poems. Sometimes the poems connected and sometimes they didn’t, but it was a great way to generate work. Having the pressure of someone waiting for me to write my poem, helps me get over a block because it’s not just about me anymore.

d) Prompts: See next question below.

e) Meditation: If I meditate, I find that I can get myself into a writing zone especially when I’m feeling edgy or unproductive. It can help me focus and get rid of negative thoughts. So much of the writing process (for me anyway) has to do with managing both negative self-criticism and ego. If I didn’t have the ego, it wouldn’t matter to me whether I produced something good or not, and I likely wouldn’t be so critical. Meditation gets me out of this loop and helps me just focus on the writing without evaluating it. I use a free app called Stop, Breathe & Think.

f) Napping: Napping is key to my writing process and getting unblocked. When I first started writing I noticed that when I sat down to write, I always felt sleepy. I used to think I was lazy, but then I discovered that giving into the sleepy feeling rather than fighting it, helps my writing process. If I’m stuck on something, I’ll let myself have a 20-minute snooze. I bring my notebook to the bed or couch with me, and I think about what I’m struggling with. Inevitability while I’m in this half-asleep, half-awake state, ideas start to form.

g) Experimental Techniques: In addition to writing narrative poetry and fiction, I’m also interested in experimental writing. Generating work from found texts, constraints, transcription, rearrangement, erasure, redaction, etc. can produce interesting works, but also these techniques can serve as starting points for all of my projects. If I’m feeling resistant to writing and I’m working on a story, I might play around with some Google searches or try to write something using a found text before I begin. There is something about experimental techniques that get my brain going. It might have something to do with the fact that the content is often external and the writer’s role in the process is that of editor rather than content generator which can take the pressure off.

h) Crossword Puzzles: I’m terrible at crossword puzzles, but it doesn’t matter. Just mulling over the clue, exercises my brain which is always good for a productive writing session.

The first prompts that I used were from Charles Berstein’s experiments and Bernadette Mayer’s experiments. I’ve also used prompts from books such as Natalie Goldberg’s Writing Down the Bones and Janet Burroway’s Imaginative Writing.

These days I like to create my own prompts. Last year I started a monthly newsletter in which I deliver my own writing prompts by email. The prompts are usually based on something in my life—an anecdote, a detail, something I overheard, or a photo I took—which I use as a starting point, and then I create a prompt out of this material for writers of all genres.

Using freewriting and prompts can help me focus on a larger project. And it can produce—especially for poetry and flash fiction—unanticipated and unexpected results. It’s freeing because there’s no pressure.

Do you use these methods in your own writing, in teaching if you teach writing, or both? If you use them in teaching, what sorts of responses do you get from students?

I use them as both a writer and creative writing professor. Whenever I give an in-class prompt, I often participate in the exercise along with the students, and it never ceases to amaze me how in ten minutes, with a single prompt, you can create something you never would have dreamed of writing that day.

I think it’s important when writing prompts as part of a group that no one is ever pressured to share their work. I had a poetry professor once who would make us write using a prompt and then everyone in the class had to read what they wrote which ended up blocking me so badly I almost dropped the course. In my classes, reading prompts is always voluntary. If you provide students with a good prompt, they’ll get excited by the results and want to share them with the class.

I have found that students really like prompts. And the trick to writing a good prompt is to make sure that anyone can insert themselves into it. If the prompt is too specific or too focused on a single audience then you risk the participants feeling more alienated than if they didn’t have a prompt at all. I find prompts that tap into emotions work best or prompts based on images tend to garner interesting results.

I usually begin a prompt by telling a personal anecdote related to the prompt which often triggers the students’ own stories.

Sometimes I’ll do an idea-generating exercise where I tell a story on a specific theme such as being alone or doing something I regretted and then ask them to share an anecdote on the same topic, and we’ll spend the whole class sharing stories. It’s a great way to get writers to think about their own stories that they often didn’t even realize they were carrying around with them.

Here’s a prompt that I used recently:

This prompt was inspired by the New York Times documentary called Ten Meter Tower. In the documentary each person is about to jump from the 10 meter diving tower, and we watch their reactions just as they are about to take the plunge or climb back down the ladder.

The documentary reminded me of a time a snake slithered up beside my friend and I at a cottage while we were sitting by the water, and I screamed and ran away leaving my poor friend to face the snake alone. I then had to go back to get my towel but could not make my body return to the place where the snake had been. We laughed about it after, but I felt like a terrible friend.

Prompt: Watch the documentary Ten Meter Tower. Then write a poem or story in the form of a monologue about a character's phobia just as they have to face it. The opposition is their own fear, and the poem or story will resolve with the character either doing or not doing the thing that they fear. 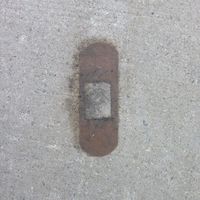 Here’s another prompt I used recently. I took this picture of a bandage I found stuck to a sidewalk.

Prompt: Write a poem or story about how this bandage ended up in this place.

No because often I use prompts to get my brain working. I’m never worried about the final product when I’m working with a prompt.

I don’t think so.

Every writer needs to figure out what their process is instead of comparing themselves to others and feeling like they don’t measure up. I use to feel inadequate because I don’t write every day. I can’t. Even when I have time to write, I can’t write every single day—prompts or no prompts. I do my best but that’s who I am as writer. I need time to process and read and think and interact with others. Sometimes I’ll write for a week straight and then take a month off—unless I have a deadline.

And speaking of deadlines, if you find you aren’t writing at all then I suggest creating a deadline for yourself—a contest, a residency, a grant, a submission, a pact with a friend. Just find a way to be accountable to something or someone outside of yourself.