I’m often asked by aspiring writers, “How did you become an author?” or “How did you get into the publishing world?”

I used to think this was a really tough question. Because of course there’s no one-size-fits-all answer. My path cannot possibly be the same as your path because we’re different people with different circumstances.

There are some things you can do to increase your chances of success. As long as your definition of success doesn’t include being rich or famous, because I can’t help you there.

About ten years ago, the wonderful Elizabeth Ruth gave me the most excellent advice. She said we need to remember that, for most of us, the writing journey is a very long one. And all of our experiences are simply part of that continuum, which just keeps going.

Sometimes, very rarely, it leads to fame and fortune. Mostly not, though.

The key is to celebrate every triumph—big and small—along the way, to thank the people who've helped you, and to acknowledge how far you’ve come. Not in relation to other people, though—that kind of comparison will only end in heartbreak. I mean where you are now in relation to where you were before.

I’ve noticed that I’ve been proudly repeating the following sentence a lot lately: “I’ve been doing this for twenty years!” *shakes cane in the air*

Because it’s 2018, and in 1998 I moved to Toronto from Whitby, after completing my undergrad in English Literature at Trent University in Peterborough. Where I read this month! And I had the best time thanks to a very warm crowd and the splendid hosting of Lewis MacLeod, and the next day I indulged in a glorious nostalgia-tripping weep-fest around campus. Happy sigh. 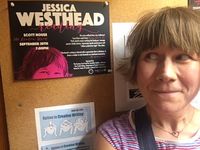 While I was at Trent (which was the best possible place for me to have gone, and which I attended at the urging of a wise man named Michael Stokes, who I met through some supportive teachers of mine in high school, who became my mentor and then my friend), I attended writers’ readings and submitted to local literary journals and took Orm Mitchell’s Creative Writing course, and went to my very first launch party with Sarah Selecky for the issue of The Peterborough Review that we both had stories in, and was absolutely dazzled by the editors’ huge, rambling house and their kids were running around and there was wine and we were getting published and this was a party to celebrate that!

Back to Toronto. Once I scoured the “Roommate Wanted” ads in NOW Magazine and found my little apartment in the Annex, my friend Jim Munroe (who I met through my mom, who used to work with his stepmom, and one day they were talking: “My daughter is a writer.” “Really? My stepson is a writer!”) invited me to join the writing group he founded, called The Hoity Toity Writers.

The Hoities taught me how to be a better writer, and encouraged and fostered my writing style that was beginning to emerge, and introduced me to the world of zines, and I did my first public readings with them (which I still consider to be a form of getting published because you get immediate feedback from an audience and you learn so much about what works in your story and what doesn’t).

Pretty much every single good thing that has happened in my literary career can be traced back to the Hoities, either directly or indirectly. And I guess, by that line of reasoning, to my mother. Thanks, Mom! 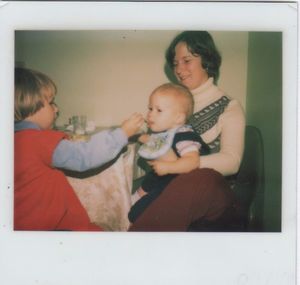 My mom with me and my brother, a long time ago

While I'm at it, I also want to thank my father, who has been cheering in my writerly corner since the day I was born. Or, I guess, probably more like since I learned to read and print. For a long, long time, anyway. Thanks, Dad! 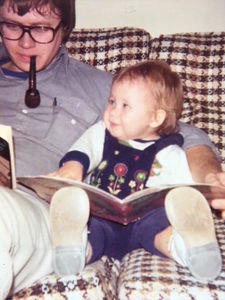 Me and my dad, a long time ago

And I’d be a jerk if I didn’t also thank my ever-patient husband and daughter, who still love and support me even though I’m in my head and basically ignoring them half the time. I love you guys a lot.

So here’s what you can do: Make your own community. Seek it out. Attend book launches and book fairs and writing festivals and readings. Sign up for the open mic. Take courses and workshops. Don’t be afraid to call yourself a writer—if you write, that’s what you are. And if you enjoy another writer’s work, let them know (and let other people know as well). Be brave and be kind. Eventually you will find your people. I’m talking about real life here. Social media is fine, for what it is. But there is no substitute for actual in-person connection with other human beings.

Then, if you haven’t done so already, get together with some writer friends and start your own writing group. Because first and foremost you should be writing for yourself, but it also helps immensely to have a few trusted readers to write for. Preferably people whose opinions matter to you. An integral part of my revision process now involves showing my early drafts to a few cherished first readers, who know where I’m coming from and what I’m capable of, and who won’t pull any punches.

I’m a big believer in using old-fashioned paper and pen for first drafts, if possible, or at any point in the writing process if you’re feeling stalled. And if you’re stuck on a story problem, get outside and get moving. Preferably with no destination. If you must bring your phone, turn off the notifications so it stays quiet and doesn’t distract you. Bring your notebook and pen or other preferred writing device, and let your mind wander around the scene you’re working on. Visualize what’s happening and listen to what the characters are saying. Then write it all down.

View rejections and other setbacks and disappointments—which are inevitable—as the temporary glitches they are, on your long, winding continuum of a writing career. If you’re feeling low due to professional jealousy (which I'm pretty sure we all feel at one time or another), take the sage advice of the amazing Grace O’Connell (who happens to be one of my cherished first readers) and feel free to have a “good wallow.” But then let go and move on.

Amplify marginalized voices, and read widely. In particular, reading books by authors with experiences and backgrounds different from your own increases empathy and helps to bridge the divides between us.

I’ve listed a few more suggestions here in my Writerly Items Ahoy, along with my very favourite short-story collections ever (at least so far) in Canada and beyond.

Above all, make time for your writing, have faith in your abilities, believe that you deserve the successes that you’ve earned, and do the work. Because the work is good. We use our imagination and we create something that didn’t exist before. How cool is that?

And if you were to ask me right now, “How did you become an author?” or “How did you get into the publishing world?”

I would answer: “I did exactly what you’re doing now.” Then I might say something corny like, “You’re already on the right path, because you’re here.” But I would mean every word.

Many thanks to the lovely folks at Open Book for hosting me here this month, and many thanks to you for visiting. Now go and write something. :) 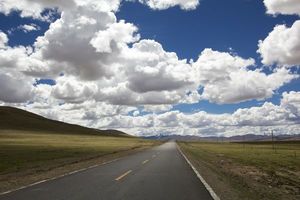