Why does my writing tend to focus on family secrets? In particular, on children trying to unearth secrets tied to their parents’ pasts? I’m often asked these questions during interviews. The first thing that springs to mind is that I come from a family that experienced the Japanese-Canadian and Japanese-American Internments, during the Second World War. My grandparents on my mother’s side and my paternal grandfather were interned in camps in the interior of British Columbia, in ghost towns that were hastily retrofitted to house the “enemy” population. My other grandmother was interned at Minidoka, Idaho, but she later was able to move to Kaslo, BC, where my grandfather was being held. In the years after the war, many of their generation shied away from looking back at this painful, shameful period; they wanted nothing more than to move forward and rebuild their lives.

By the time I was born, not many people in my family talked about the internment, except in odd snippets. My half-deaf, maternal grandmother would blurt out at birthday dinners, apropos of nothing, “First, they carted us off to Exhibition stadium, where I had to sleep in a stall with horse dung on the wall.” Thus, I had some idea of what had happened. My parents had explained the internment to me, in factual terms. In 1988, when Brian Mulroney granted each internee $21 000 in redress for the injustice, Japanese-Canadian internment history reached a new level of public attention. Nevertheless, this period in my family’s past remained hard for me to get my head around; it contrasted so starkly with our fairly comfortable, middle-class lives. That other time — captured in a few blurry, black-and-white photos of a ghost town I’d managed to glimpse at one grandmother’s house — appeared shrouded in mystery and unspoken things.

My most vivid childhood memories relate to secrets of that era. When I was eleven, my parents and I took a trip to Vancouver and Victoria with my maternal grandparents. At first, I thought this was going to be a nostalgic return trip for Granny and Grandpa, and a chance for me to be educated about where they’d come from. While this was part of it, it turned out that the real purpose of the trip was for my grandfather to visit his brother, who’d been committed to a mental institution, before the war, and not released since. My grandfather hadn’t seen this brother, Akira, in over fifty years, ever since Akira had fallen into substance abuse and contracted syphilis from consorting with prostitutes. Back then, it seems, this may have been enough to merit being put away. (I only found this out years later, when another family member revealed what had led to Akira falling out of favour with his kin.) After the internment had ended, my grandfather and his other siblings were all relocated to Ontario; returning home to the west coast wasn’t legally an option until much later. During the post-war years, while Akira remained institutionalized in BC, my grandfather was faced with the all-consuming effort of rebuilding his life in Hamilton, Ontario, earning a living as a steel worker, raising his own family, and caring for his ill stepmother. 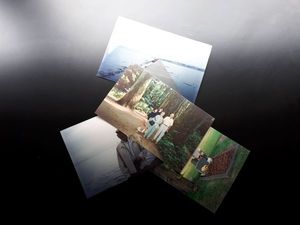 Now, at last, my grandfather had come to see his brother, with his family in tow. The prior day, my mother had hastily explained to me that I had this great-uncle whom we were going to visit. We weren’t quite sure what state of mind Akira would be in, after all these years. How shell-shocked and weary these two old men looked, as they were forced to confront each other, in the pastel living room of the mental health facility. When he walked in and first saw his brother, Akira froze and backed up on his heels, like a spooked horse. I sensed a great, quivering cloud of shared memories and hidden, painful history in the air between them … Material for a future novel, I think. I’ve started to work through some of this in embryonic form by writing a short story (forthcoming in a Guernica anthology later this year).

It’s possible that all novels I write will, in some way, be a blend of fiction and non-fiction. This seems to be the hazy space or threshold I’m most comfortable inhabiting. And to be honest, I’m not sure that I’m capable of writing any other way. I’ve attempted to write fiction that has nothing to do with my life or family. For instance, I spent three-quarters of a year writing and rewriting the first few chapters of a suspense novel surrounding art theft, a topic that interests me greatly. As research, I read many intriguing, informative books on the subject. But the characters wouldn’t quite come to life; the plot seemed derivative of other novels. Eventually, I threw in the towel. (Who knows? Maybe years down the road, I’ll resume working on this manuscript, but at the moment I rather doubt it.) I realized that it shouldn’t have to be so difficult. What I needed to do was be patient and open my senses and let the project choose me. When I’m working on something that comes from a personal, intimate place, the writing unfolds more naturally and with pleasure.