Kamal Al-Solaylee wrote an amazing book called Brown. It's essential reading and its subtitle, What Being Brown in the World Today Means (to Everyone), says why you need to read it much more concisely and elegantly than I could. This interview is not about that.

Since Kamal wrote a book called Brown, I thought it would be fun to ask him about other colours. I originally planned to pick one or two of his answers and draw comics about them. Then I was crippled with indecision because all of his answers were so brilliant and beautiful and perfect and great.

Instead, I think you'll be glad that I simply illustrated the Q&A and gave you all of Kamal's delicious answers. Lucky you.

Do you have a favourite colour? Is it the same as your childhood favourite? If it changed, when, and do you remember if there was a reason? Do you surround yourself in one colour, across possessions, clothes, etc., a limited palette, or do you like a lot of colour variety?

Right now, I tend to gravitate toward blacks, greys and blues (both light and dark blue). I think they just suit this stage of my life where I prefer not to draw attention to what I’m wearing or where and how I live.  I like to just slip by. My apartment is decorated in monochromatic colours (black, grey, white) and it’s a calm, unobtrusive space. I’d say that my preferred colours have changed from childhood when I used to love green and bright colours (except red). I think it’s all part of the aging process. I’m a more muted, conservative person than I used to be. I don’t see this in terms of losing the wilder side of life but as embracing of the more reflective, quieter one. I’m not one to grow old disgracefully. 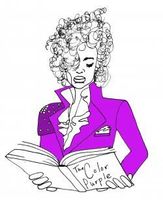 If your favourite colour was a food, would you eat it?

Not many food items come in blue, black or grey. But I’m also drawn to purple and it has nothing to do with Prince or The Color Purple. It was just a rare colour in the Middle East. I associate it with Paisley patterns. But the first thing that came to mind when I saw this question is an episode of The Simpsons in which Lisa goes to work with Homer and asks if he has any fruit for her to eat. Homer, looking at his tray of donuts, points out a purple one and tells her “Purple is a fruit.” There you go, a perfect combination of food, colour – and bad diet.

A colour that’s somewhere between yellow and brown. Let’s call it sand colour. I grew up in Cairo, very close to the Giza pyramids and the desert, so I remember noticing that colour everywhere and still recall my life there in very sepia tones. It sounds romantic and exotic but that’s not my intention. I also remember the postcards and calendars of nature scenes from Europe and North America where the colour green featured prominently. My dad used to receive them from western companies that he’d write for in the hopes of making business deals. Nothing more than these calendars and postcards came out of that correspondence. My siblings and I would look in wonder at these images of gardens and forests in lush green. I think my love of green at the time was a subliminal desire to get out of the dry, arid Middle East.

If you could be any colour (excluding fleshtones) what colour would you be?

I’d be navy blue. I has gravitas and hint of sexuality because it conjures up images of hunky sailors and sea captains.

Would the colour of an item you were going to buy influence your decision to buy it, even if it lacked a key functionality? What about if the very best object was only available in your very least favourite colour?

No, I’m not likely to buy something just for its colour. I’m also not likely to buy an object in my least favourite colour even if I loved it and wanted it badly. I think I’m too cautious and self-conscious to stray that far off the neutral path. I realize this makes me John Tory-boring but the fact is I’m mellowing with age and making a lot of very rational (some may call them uptight) decisions.

What colour is your favourite object or possession? Can you describe it?

I own a painting by the late Canadian artist Peter Haworth that I love despite the fact that it’s predominantly in yellow and red.  It’s the one burst of colour in my living room. It looks like painted glass that refracts light. Haworth did a lot of stained glass, especially in churches, as well so this piece draws on various parts of his creative legacy. On overcast and gloomy days, I pretend that the bright yellow in it is actual sunshine. I’m also fond of a silver key chain my brother gave me in 1988 and that I’m still using. It features a traditional ceremonial Yemeni dagger. It’s something that connects me to my family and ethnic roots so I’m very fond of it.

Do you favour a particular colour tie? Is there a reason?

Blue. Men in blue ties (on white or light blue shirts) are a turn on for me.  The combo of preppy and serious business appeal to my sense of order and understatement. Just like sailors appeal to my, well, once-naughty side.

I admit to owning one orange and one bright-blue boxer shorts. I also have a handful of colourful socks. But by and large, I’m a tighty whitey underwear and black socks kinda guy. I love SAXX white underwear because they have a pouch-like front that’s perfect for my, ehm, boys to rest.

How do you feel about colourful food? Do you have a favourite fruit or vegetable?

I love peaches, apricots and really adore bright orange baby carrots. I used to buy so much baby carrots to treat my dog Chester as an alternative to cookies since he was prone to gain weight. You could always find carrots in my fridge. I still think of Chester (who died more than 18 months now) when I buy them. I miss the sound he made when he crunched them with his teeth. He’d first hold a piece of carrot in his mouth as if it were a cigarette before he’d munch on it. He was all black so suddenly you’d see this orange bit hanging out of his mouth.

Do you eat candy? Are there flavours/colours that you will not eat.

Don’t have a sweet tooth in general.

Do you like colours to be vivid or desaturated?

Have you ever died your hair another colour? If so, how long ago & what colour?

I did. For Pride 1997, my then-partner Jochem and I thought it’d be a hoot if I became a blond for a day. So we went to Shoppers’ Drug Mart in Yonge and Bloor and picked up standard hair dye. Little did we know that with my dark black hair, I’d have to bleach it before I can dye it in any colour. It came out red, Rita Hayworth-red. Or henna-red, if you want a culturally more appropriate reference. I immediately had a haircut, bought a beret and tried not to draw attention to it. It faded after a few weeks. Never again.

Where was the best rainbow you've ever seen?

My first and best was in Beirut in the late 1960s. The Lebanese word for it is “Kouz Kazah” and I must have been about five years old. I don’t recall seeing a rainbow as vivid or as magical as that. It’s probably my nostalgia for a lost Middle East that’s making me think that way. It was my first exposure to the wonders of nature.