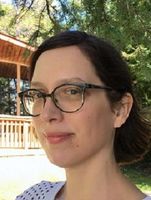 Jeremy the cat wakes up in the vet's office feeling a little off. It doesn't take him long to figure out the culprit: the giant cone around his head! Sadly assuming that his old identity is now long gone, he accepts his new life as the stumbling, goofy Cone Cat.

It all seems pretty dour until Jeremy discovers that Cone Cat has some hidden powers: he can hunt down bugs easily, scam free food from unsuspecting humans, and amass an impressive collection of sweet, sweet, couch stuffing! Suddenly, things don't seem so bad.
When Jeremy's cone comes off, however, he wonders if he will ever reprise his alter-ego again. Thankfully, he'll find out soon enough!

Featuring charming, evocative illustration by Carmen Mok, Cone Cat is a hilariously fun lesson on finding the silver lining in tough circumstances that will appeal to cat-loving kids and their parents.

We're very excited to have Sarah at Open Book today as part of our Dirty Dozen series, where authors share twelve things we may not know about them. Sarah discusses the one benefit of living with Meniere's Disease, the inconvenient timing and location of her arrival into the world, and the two cats whose entertaining personalities inspired her new picture book.

1. When I was a kid, I collected cicada shells. These amazing critters shed their exoskeletons as they climb their way up tree trunks and such, after sitting underground for two to seventeen years! Each summer, I would pluck the craggy brown shells off their perches and gather them up in a plastic container, where they would gross out my brothers and eventually disintegrate into their constituent parts

2. I like being barefoot as much as possible. I used to take pride in the fact that I could walk over many a stony surface, like our old gravel driveway or a rocky beach, without it bothering me at all. No longer—I now have the tender, sensitive footpads of the city dweller.

3. I have two cats, Oliver and Archie. Archie (all black) has a cute little bobtail that he wags like a dog, while Oliver (a tabby) has a long elegant tail he uses to express his every mood. These guys inspired my new book, Cone Cat, by being alternately pathetic and goofy in their post-surgical cones back when they were kittens. They’re big personalities, and they’ve always got some type of scheme brewing, whether it’s trying to steal my daughter’s Shopkins and hide them in unusual places or randomly shredding important paperwork. I can’t imagine life without them.

4. I have green eyes—is that interesting? Maybe! Apparently, it’s the least common eye color. My childhood friend used to say my green eyes made me a witch, which I can neither confirm nor deny.

5. I love the water, but I don’t really know how to swim (I only dog paddle, in the words of Fezzik from The Princess Bride). I could still learn! But not during COVID-19!

6. I was born seven weeks early while my parents were at our family’s cottage on an island in Parry Sound. My dad, who was not keen on driving a motorboat, had to shuttle my mom to the mainland in the middle of the night (through churning waters, according to him), while my sleeping brothers were foisted on a neighbour. I got my first helicopter ride shortly thereafter, to Sick Kids Hospital, which I imagine must have been quite a thrill.

7. My middle name is Lindsay, from the Lindsay clan, which my dad’s side is descended from. The clan’s credo is “Endure Fort”, which means endure bravely or suffer bravely. A little dour, but hey, we’re a tough crew. I hope one day to go to Scotland to explore the land of my heritage, and outfit myself fully in tartan.

8. I like bad jokes, but I pretend not to. I also like to guess their punchlines, much to the consternation of my daughter.

9. My favourite food is lobster (with plenty of butter). My least favourite food is canned corn. When I was pregnant with my daughter, I couldn’t stand cooked onions. But now they’re back in rotation. And if I could eat cake for every meal, I probably would.

10. I’m mostly deaf in one ear, from a condition I have called Meniere’s Disease, which causes bouts of vertigo and tinnitus, leading to gradual hearing loss. A few famous people who’ve suffered from Meniere’s: astronaut Alan Shepard, musician Huey Lewis, and some say Van Gogh (known as the Huey Lewis of the post-impressionists). I can tell you I will never again take for granted the amount of equilibrium involved in just walking a few feet or standing up from your desk. The only plus to the hearing loss part is that it makes sleeping in noisy surroundings easier, because the right ear is a natural noise filter: built-in earplugs/sound machine!

11. My dream job would be having my own little candy shop… that also would have books, of course. I can’t eat dairy—which I find a bit of a drag—so I would make tons of dairy-free delights that would taste just as wonderful as the originals: chocolate, fudge, ice cream, caramels… Oh, and since we’re in imaginary-land, they’d be good for you, too.

12. I love thunderstorms, have since I was a kid. There’s something so awe-inspiring about gigantic sparks arcing down from the sky (especially at night, lighting up the darkness), and the fact that their journey makes a noise like the earth splitting. I guess I love experiencing something so much bigger than myself. It makes me remember nature is in charge. But what I love most of all is the cosiness of being safe inside to watch it all happen.

Sarah Howden is an author and editor who lives with her husband and daughter in Toronto, Ontario. This is her first picture book.

One day, Jeremy wakes up at the vet’s with a giant cone around his head. In a momentary existential crisis, he resigns himself to his new role as clumsy, smelly Cone Cat. That is, until the cone becomes instrumental in lapping up the last few bites of cereal on the breakfast table.
Surprisingly, Cone Cat can do a lot of things old Jeremy couldn’t. He can hunt spiders with ease, collect stuffing from the couch, and disguise himself as a bowl to steal a scoop of ice cream at a birthday party. When the cone is removed the next day, Jeremy starts to miss it. Will he ever get another chance to indulge in the tricks he pulled off as Cone Cat? It doesn’t take him too long to find out …
With lively illustrations and plenty of wit, this hilarious picture book about adapting to seemingly im-paw-ssible situations is sure to please kids and cat-lovers alike.