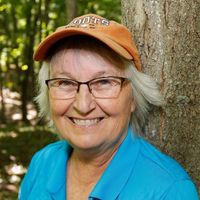 Grace Vanderzande didn't set out to be a farmer or a writer, but falling in love led her to become both. When she met her husband and he shared his dream of owning and farming land in eastern Ontario, she made the dream her own. Two children and two hundred acres later, she began sharing her madcap adventures of life as an inexperienced but determined farmer in the pages of several local newspapers, including the prestigious Kingston Whig Standard.

Her debut memoir, Unbuttoned: Our Farming Life in Southeastern Ontario (Crossfield Publishing), builds on those columns to take readers into a gentle but tough life filled with family, challenges, love, and, always, the unexpected. Vanderzande's charming voice and honest emotion are the through-line of the book, revealing a refreshing optimism, quiet humour, and calm in the vein of memoirist Peter Mayle.

Today we're sharing a short excerpt from Unbuttoned courtesy of Crossfield Publishing, where we see Grace first set foot on the land that would become her home and her job for decades to come.

Excerpt from Unbuttoned: Our Farming Life in Southeastern Ontario:

“Have you always farmed?”  I was asked this by a lovely woman who I had never met. Memories flooded back.

My husband (fondly known as My Hero) had a dream. I always thought it was a great dream. I had dreams too. He someday wanted to own his own land and farm. I always threw in the words (at least in my head) “And they lived happily ever after”. Those fairy tale books sure do mess with a girl’s head. I had no idea that someday both our dreams would come true. I also had no idea that his dream, would turn out to be huge and more difficult journey than either of us could have ever imagined.

You see, back in the day while engaged, My Hero and I lived in the countryside. In a three-bedroom all brick bungalow with two bathrooms and a finished basement that we had built ourselves. He rented land from a neighbour and farmed a bit. We were both working full-time. Life was good. I was living my dream, and I honestly believed his dream was fulfilled too. I did not really understand how important that long-held dream was to My Hero until the day we went to a certain auction.

I remember that day like it was yesterday. I was dressed in a green leather jacket. It was a blustery cool October morning, and we headed north to check out an auction that a friend had told us about. Naive me thought it was just another regular auction. I guess I should have paid more attention. Looking back, all the signs of what lie ahead were there.

Once we made it down a dusty back road where we passed a beautiful limestone farmhouse with a red barn, we came to a farm with people standing all around. I noticed that there was nothing there but corn fields, a very large old house with a long drive shed, a huge barn and other outbuildings. This was when I began to wonder what was up.

I could see My Hero light up when we looked across the lush land as far as you could see. It was a beautiful sight with its corn fields and a bush off in the distance, and a variety of towering trees dressed in fall colours.

We toured the house. It did have character. It also had no plumbing, no heat, not many electrical outlets, and a few overhead lights, which were original and very interesting. This house may have been a beautiful place at one time, but it obviously had been abandoned for what appeared to be a long time. It did have the most beautiful tin ceiling in the living room and a huge fireplace with a mantle. I remember it also had a green metal dustpan and a corn bristle broom that stood in the corner. This was no doubt used to sweep the old torn linoleum floors.

The auctioneer called everyone over and gave the spiel about the house, the land, and the conditions of sale. I remember watching My Hero, who had a look on his face that I had never seen before. The bidding started, and it was fierce at first. I stood watching and was rather enjoying the excitement of it all. My Hero smiled as he turned to look at me. Then his hand shot up. I almost fainted. What was he doing?

It was quickly narrowed down to two bidders: an older couple who looked determined and really wanted this farm, and My Hero. The couple was ahead in the bidding and then everything stopped. The auctioneer looked at My Hero and me.

“What do you think?” My Hero asked. What do I think? It was a fine time to ask me now.

That was what I was thinking. The only words that came out of my gaping mouth were, “It is beautiful land.”

Grace Vanderzande is a mother of two and was further blessed with two grandchildren. She is an avid storyteller raised in the small village of Odessa Ontario. She fondly calls her husband “My Hero”. Together, they bought two hundred acres outside of Napanee, Ontario in 1979. He worked
a full-time construction job while Grace was left to handle the day-to-day operations of their ever-expanding farm. Two children, tending livestock, as well as the household duties. This is the source of her inspirational stories sowed in the realities of farm life in Ontario.

As a creative outlet, she started a blog named Buttons Thoughts in 2010 which soon became very popular. True short stories about her daily life and how she coped with humour and imagination captured her audiences. In 2014 she started sharing her stories in a monthly column, Tales from
the Farm, in a local newspaper, The Napanee Guide. Kingston This Week and The Kingston Whig Standard still publish her column. Grace is a nature lover and spends most of her time in the bush, sitting on a rock or stump. Surrounded by the wildlife that shares their farm, she is never without her camera, paper, and pen.

Unbuttoned: We all have childhood dreams in life. Grace wanted to be a writer. Her partner, who she refers to as “My Hero,” had another dream. Unbeknownst to her his dream was to own and run his own farm. As often happens, love plunged into his dream. Opportunity knocked and they jumped in with both feet and blinders on. Farming is the most frustrating and rewarding thing a person can do. Eventually, after never ending unpredictable highs and lows, mixed with lots of tears and tightly woven with laughter, Grace did what she needed to do to get through. She started writing short stories on a blog Buttons Thoughts. Sharing her stories and quirky sense of humour with others became her coping mechanism. The simple things in her life became hugely important. She gravitated to writing about very real situations with a dash of whimsy. Her pain and frustration were finally overtaken by the brighter sides of once-crippling events. She embraced the beauty of every season. Nature became her best friend. That was her saving grace. Grace has shared these stories over and over, believing that people should not hide their fears or their joys. This book is a compilation of some of those stories. Grace and her husband’s dreams happened to come true through hard work and the love and support of each other. What could be better than that?