Céline Huyghebaert's autofictional novel, Remnants (Book*hug Press, translated by Aleshia Jensen) is an unflinching and yet tender exploration of family and meaning, memory and connection.

Multiple versions of Huyghebaert’s father are constructed in interviews, remembrances, photos, and even dreams, exploring his sudden death, his life, and his connection to his daughter. Beautifully jagged and filled with vulnerable, aching longing that resonates like a deftly played violin string, Remnants is a search for answers that finds beauty in the questions. What is a family? What is a father, a daughter, a memory? And what is left of us when we are gone? Never sentimental or sodden, Remnants is tough, tightly written, and even wry at points, while honouring the depth of its subject.

Excerpt from Remnants by Céline Huyghebaert, translated by Aleshia Jensen: 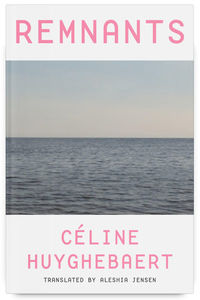 Families are governed by codes of conduct, a language, what we can say and what’s forbidden. We learn compliance through mimicry. There are certain questions we don’t dare ask, since no one asked them before us. We each end up believing in some deep secret that, if it were revealed, would tear the family apart. But that’s not it. It’s not the secret that’s the threat, it’s the question we never ask. If we did, none of the answers would reveal anything new, but we would no longer be able to cling to our own little narratives.

I had written out a fairly long list of people I wanted to speak with while I was in France, and my notebook was filled with phone numbers and addresses. I was afraid, and I kept putting off the calls.

The first interviews were especially hard. I had this naive idea that I would be leading my family to a point of no return. But I wasn’t brave enough to break the silence. I didn’t even manage to make us relive the events; we barely pieced them back together. So I returned three years later for a second series of interviews. I wanted to talk to the same people, ask them the same questions. They would be free to correct the text as they read it, on camera.

Few were willing. Some had died; others refused. Among those who agreed, memories had softened, the bitterness swept under happy anecdotes. I took the dead, the refusals and the pleasant sentiments. I did what I could with them.

Everything starts there. The interviews are not evidence. They don’t reveal the truth of an event, only the speaker’s relationship to it.

Christelle is at the head of the bed, her back resting against the bedroom wall. Her smooth blond hair is loose and falls over her shoulders. She’s beautiful and smiling, a slightly anxious look on her face. The sheets of paper are spread out in front of her. She hasn’t read them. She’s listening to Céline explain how the second interview will go. “So I had to cut a few things, because we talked for over three hours. If it’s okay with you, I’ll ask you the questions and you answer as if you were doing a casting call. You don’t have to follow the script exactly. If you want to change something, because you don’t remember saying it, you can. Or if there’s anything you forgot to say the first time.” She adds that there are a few trick questions: ones she hasn’t asked before. Christelle can answer them however she likes.

“I’ll put the camera here.” Céline sets up the camera on a tripod a metre away from her sister. It’s a classic shot, medium close-up, at a slight angle. From time to time, Christelle leans out of the frame to grab a cup of tea resting on the floor; she reappears, brings the cup to her lips, then bends over again to rest it on the carpet next to the bed. She tells her sister that memory is deceptive, that by correcting herself after the fact like this, she might well be erasing the truth. On camera, we don’t see Céline’s face as she answers, “Exactly.”

CHRISTELLE: My name is Christelle Huyghebaert.

CÉLINE: And what’s your connection to Papa?

CÉLINE: And I’m adding a question I asked Élodie the first time around, but not you. How do you see my project?

CHRISTELLE: (Laughing) How do I see it? I see it as an art project. And I think it’s also work you need so you can grieve, and reclaim someone who, in the end, had gotten away from you or who you’d distanced yourself from.

CHRISTELLE: (Hesitating for a moment) I guess I don’t fully know what that means...

CHRISTELLE: If that’s what it means... then yes, I’m done grieving. I didn’t deal with my grief until the year after Papa died, but it happened eventually. Before that I was in denial. (Short pause) In the end, it’s really whatever your survival mechanisms are. Mine are to set things aside for a while.

CÉLINE: For the funeral?

CHRISTELLE: Funerals are a ritual. It’s not one that feels right to me, but it’s a social thing. You have to be there. If you’re not at your father’s funeral, people are going to judge you.

CÉLINE: I don’t remember who told me about going to a wake. The body was in a room for a whole week. (She grimaces.) The immediate family stayed with the body. And the extended family dealt with the paperwork, organized the funeral, and even the grocery shopping, cooking and cleaning. Over those few days, being with the body in that room, the family got used to the death and could let the person go more easily.

CHRISTELLE: I don’t think that would feel right to me at all.

CHRISTELLE: I need to...escape a little.

CHRISTELLE: I need to forget, and shift my focus to something else. CÉLINE: Shift it back to a routine?

CHRISTELLE: Yes. For instance, after Papa died, I went out a lot, saw lots of friends. I didn’t feel like grieving then.

CÉLINE: But it caught up to you?

CHRISTELLE: Yes, but I think it’s less intense when it catches up to me later. (She rests the papers on her knees and looks at her sister.) At the same time, I’m on the verge of tears right now, so I’m not sure if I’m completely done. But I guess I live with the weight and the pain that’s still there. I don’t know that you ever really get over it completely.

At the end of the interview, a few seconds before Céline stops the camera, Christelle says, off-script, “I don’t know whether Mom is really ready to redo her interview. I’m not really sure you should force her.” She phrases this gently but her expression is resolute, so much so that Céline feels the guilt between her ribs, just under her breastbone—a feeling that’s becoming harder and harder to shut off. “I know,” is all she answers.

Céline Huyghebaert is an artist and a writer. Her work, at the intersection of visual arts, language and literature, has been exhibited in France and Canada. In 2019, she won the Governor General’s Literary Award for French-language Fiction for her first novel, Le drap blanc, published by Le Quartanier, and she was awarded the Bronfman Fellowship in Contemporary Art. Born in France in 1978, she has been living in Montréal since 2002.

Aleshia Jensen is a French-to-English literary translator and former bookseller living in Tio’tia:ke/Montréal. Her translations include Explosions by Mathieu Poulin, a finalist for the 2018 Governor General’s Literary Award for Translation; Prague by Maude Veilleux, co-translated with Aimee Wall; as well as numerous graphic novels, including work by Julie Delporte, Catherine Ocelot, Mirion Malle, and Pascal Girard.

Remnants is an exploration of our relationships with family and perception, told through a profound investigation of a father’s life and sudden death. With various voices and hybrid forms—including dialogues, questionnaires, photographs, and dream documentation—Huyghebaert builds a fragmented picture of a father-daughter relationship that has been shaped by silences and missed opportunities.

The reader attempts to untangle fact from fiction: multiple versions of Huyghebaert’s father are presented while remnants of his life disappear achingly quickly. What is left of someone who was not important enough to be archived? How do we talk about what no longer exists?

Winner of the Governor General’s Literary Award for French-language fiction, Remnants asks essential questions we often only peer at from the corner of an eye; questions about the value of life in its duration and passing. This is a transcendent work, ideal for readers of Annie Ernaux, Sophie Calle, and Maggie Nelson.