St. David is the patron saint of Wales, and every March 1st I make Welsh cakes. A Welsh cake is like a pancake –– you cook it on a griddle. It’s also like a scone –– you eat it with your fingers. It’s full of currents, butter, eggs and flour. Always best eaten fresh. 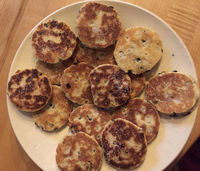 Neither my husband Tim nor I grew up with Welsh cakes as a tradition. I started making them when our children were little and had a Welsh playschool teacher. I was looking for roots and building traditions and making Welsh cakes on St. David’s Day seemed a good one to include.

Tim was born in England, but his father was from northern Wales. He was thrilled when Tim told him my name. “Lewis! She must be Welsh!”

Sadly, no. I was born in New York City. My mother was born in Vancouver but left Canada as a teenager. My father was born in Long Beach, California, but moved to New York in his early 20s. None of my side of the family has laid claim to belonging anywhere. Any roots we might have tried to put down were summarily snipped off. Or shrivelled and died for lack of nurture.

My mother longed for roots. In her first marriage, she converted to Judaism. By converting, she had a sense of belonging that she’d never had before. But when she married my father, she didn’t keep up the faith or those connections. My father, too, was previously married, to a Jewish woman, so Judaism definitely had a resonance through our lives. We celebrated Hanukkah with Latkes, Christmas Eve with Lox and Bagels. But our connection was more wistful than concrete.

When my parents separated, my mother moved back to Canada as a single parent. She felt disoriented. She had become an American citizen, and didn't think of Canada as home. So she applied for us to come into Canada as immigrants.

In those days when you crossed the border to move from the United States to Canada, you applied to come in as a “Landed Immigrant”. The form asked my mother to state our Ethnicity. On her application, she put Scottish as her father's family had originally come to Canada from Glasgow. On my application, she put “Welsh.”

I have no ancestry in Wales as far as I know, but she decided that the name Lewis was Welsh and therefore my ancestry, my “ethnicity” must be Welsh. I think she wanted to give me roots. She wanted to give me a sense of belonging at a time when we felt we didn’t belong anywhere.

I still have that faded Landed Immigrant card, with my ethnic status emblazoned on it. And so, I feel somewhat justified in making Welsh cakes on St. David’s Day.

Embracing my “Welsh heritage” for a day is an honest form of cultural appreciation, not cultural appropriation, but it does make me look at the larger concept of roots. What culture can I honestly say I belong to? Where do I “come from” as a writer?

My life has been intersected by many cultures, and diversity is part of my experience. I would never speak from the perspective of another culture. But the world that I grew up in is a place of diversity. The stories I tell are set in the shifting sands of my own experiences in that diverse world. Cultural appreciation gives me a sense of belonging.

And for me, cultural appreciation comes first and foremost through food. My voice, if I have one as a writer, comes from a world where I can make Welsh cakes and Latkes, Quesadillas and Eggplant Szechwan, Okonomiyaki and Moussaka, Goulash and Samosas. With each spice, my world gets bigger and more wonderful.