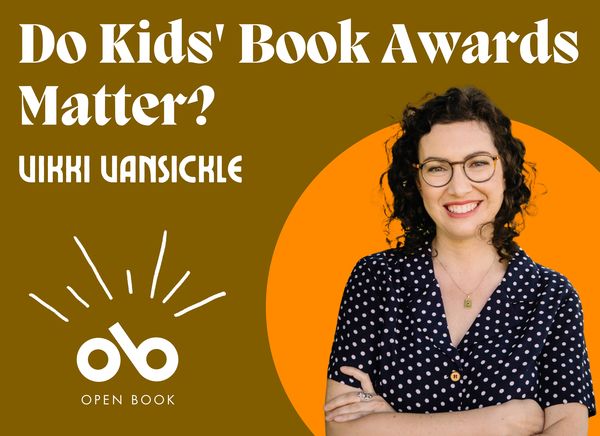 It’s Moira Rose’s favourite season— (book) awards season! It feels like a new list of finalists is posted every day. And while there is lots to celebrate, it can be crushing to watch your book go unrecognized. I love predicting award lists—this is my fantasy sports-ball—and every year I am shocked at what I consider glaring omissions. So the question is…

Yes and no. Being a writer in Canada is extremely financially challenging. Awards like the TD Canadian Children’s Literature Award or the Governor General’s Literary Award come with a significant cash prize that can make a huge difference in a writer’s life. Sometimes there is accompanying media (this is increasingly less true). Being honoured by your peers is a wonderful feeling and it’s nice to add the words “award-winning” to your bio. Some libraries and independent bookstores may be more likely to stock your title, but libraries & indies are good at stocking Canadian titles, anyway. Keep in mind that most Canadian readers have never heard of most awards, and to the general public, just having a book published is a significant accomplishment. You don’t need an award to justify your work. Here are some things to remember, come award season.

Lots of amazing books don’t make lists. Most juries are small and consist of people with strong opinions. I am one of those people with strong opinions. Not only do I curate a monthly list of books for CTV Your Morning, but I have been on a jury before. I have had to cut books I adore. My idea of the best book may not even make someone else’s top 10. There is a lot of personal experience, negotiating and compromise that goes into finalist selection.

The care, thought, and debate that goes into crafting a list of finalists has enough drama for a one-act play. Unless it is a genre specific award (like the new and much-needed Arlene Barlin Award for Science Fiction and Fantasy), you’re not going to find five similar novels on a list. Diversity in tone, genre, subject matter and the identity of the protagonist and creator are all considered. Many lists reflect the current social landscape. Some have specific requirements. Genre or light-hearted fiction is often ignored in “literary” awards, which is why genre specific awards exist. *Justice for funny books*

Awards do not guarantee sales

There is a misconception that making an award list means higher book sales. Very few literary awards result in a noticeable sales increase. This doesn’t mean they aren’t important, or an honour, but they do not translate into copies sold. There are always exceptions. In Canada, being on a kid’s choice award list, particularly the OLA Forest of Reading Program, often means classrooms and libraries will order up in large quantities. In this case, the old adage, ‘it’s an honour just to be nominated’ rings true.

Your publisher is mad at you if your book doesn’t make a list...

…and they will never publish you again. This is not true. Don’t email your publicist or editor looking for consolation or affirmation. Go out for ice cream with friends instead.

Awards are icing on the cake

When you dreamed of being published—seeing your work on shelves and holding it in your hands—I assume winning an award was further down the list of things you wanted. If you want to be a happy writer, find things to appreciate and honour about all the stages of the process. You are in love with your new idea, you finished a draft, a publisher said yes, you signed your contract, you see your cover for the first time, a loose acquaintance on Facebook DMs you to say they bought your book…all of these are HUGE moments. Don’t let a small group of 3-5 people rain on your parade.