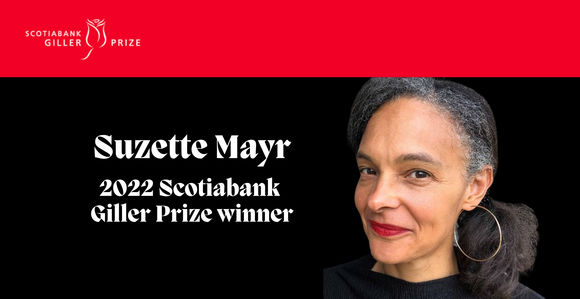 Suzette Mayr, a critically acclaimed Calgary-based novelist and poet, was announced yesterday evening as the winner of the 29th annual Scotiabank Giller Prize. The prize, worth $100,000, was awarded to Mayr for her novel The Sleeping Car Porter, published by independent Toronto publishing house Coach House Books, Mayr's longtime publisher. 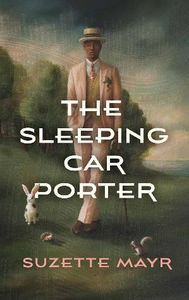 The Giller Prize, which accepts submissions of both novels and short story collections from Canadian publishers, is considered the most influential fiction prize in Canada, and it is often awarded to books published by multi-national publishers, so it's notable for a small, fiercely independent house like Coach House Books to capture the prize. Coach House actually had two shortlisted books this year, a rare feat for an independent publisher, with a second nomination for Kim Fu, for her short story collection, Lesser-Known Monsters of the 21st Century.

Mayr has published two previous books with the press: Dr. Edith Vane and the Hares of Crawley Hall and Monoceros. She is also the author of the novels Moon Honey, The Widows, and Venous Hum. Her work, which frequently explores race, sexual identity, social issues, and more, has earned her previous literary awards including the W. O. Mitchell Book Prize and the Relit Award for Best Novel, amongst others, and nominations for many more, including the Commonwealth Writers’ Prize and the 2011 Giller Prize.

In her acceptance speech, Mayr thanked the porters whose lives inspired Baxter's story, and also added "a final shout out to my LGBTQIA2S+ sisters, brothers and siblings, many of whom, like my main character Baxter, are still too scared to come out or cannot come out because to do so would be too dangerous. I love you and this book is for you". Her speech received a standing ovation from the crowd of more than 300.

The jury panel, made up of Canadian authors Kaie Kellough, Casey Plett (Jury Chair), and Waubgeshig Rice, joined by American authors Katie Kitamura and Scott Spencer, praised The Sleeping Car Porter saying "Suzette Mayr brings to life – believably, achingly, thrillingly – a whole world contained in a passenger train moving across the Canadian vastness, nearly one hundred years ago. As only occurs in the finest historical novels, every page in The Sleeping Car Porter feels alive and immediate – and eerily contemporary."

The prize announcement was made at a black-tie dinner and award ceremony hosted by poet, artist, and performer Rupi Kaur and award-winning actor Sarah Gadon, and broadcast live on CBC, CBC Radio One, and streamed live on CBCBooks.ca.

The Scotiabank Giller Prize was established by Jack Rabinovitch in 1994 in memory of his late wife, literary journalist Doris Giller. Rabinovitch, a beloved figure in the Canadian book world, passed away in 2017.