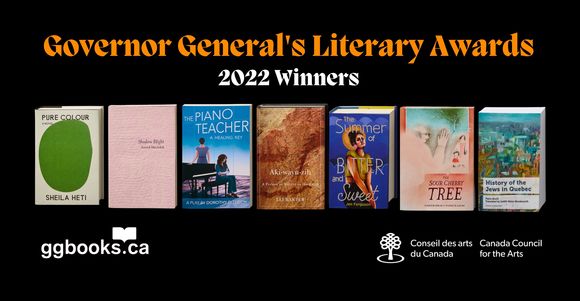 This morning, the Canada Council for the Arts revealed the 2022 winners of the Governor General’s Literary Awards (now branded as GGBooks).

The English language winners are Sheila Heti for fiction, for her novel Pure Colour (Knopf Canada); Annick MacAskill for poetry, for the collection Shadow Blight (Gaspereau Press); Dorothy Dittrich for drama, for her play The Piano Teacher: A Healing Key (Talonbooks); Eli Baxter for nonfiction for the hybrid memoir Aki-wayn-zih: A Person as Worthy as the Earth (McGill-Queen's University Press); Jen Ferguson for young people's literature (text) for the novel The Summer of Bitter and Sweet (Heartdrum/HarperCollins Canada); Naseem Hrab and Nahid Kazemi for young people's literature (illustration) for The Sour Cherry Tree (Owlkids); and Judith Weisz Woodsworth for translation, for History of the Jews in Quebec (University of Ottawa Press), her translation of Histoire des Juifs au Québec, by Pierre Anctil. The Canada Council also announced the winners of the seven French language awards.

Surprisingly, despite numerous nominations, the award is Heti's first big Canadian literary prize win (she has won several awards abroad and significant international critical acclaim). The novel follows Mira as she deals with the death of her father and wrestles with questions around art-making and creativity, a common theme in Heti's work. The peer assessment panel called the book "a work of genius".

Baxter's win is also notable, as his powerful memoir Aki-wayn-zih represents the first time a winning book has been written partly in the Anishinaabay language, Anishinaabaymowin. Baxter writes about Anishinaabay life before European contact and shares Ojibway legends, as well as discussing the effects on his family of Canada's racist and violent residential school system.

Each winner receives $25,000, with their publisher receiving $3,000 to help promote their winning book. The remaining finalists in each category receive $1,000.

The GGs are traditionally presented at a gala evening at Rideau Hall in Ottawa, however, the Canada Council for the Arts has opted for digital presentations since the beginning of the pandemic. The awards are amongst the oldest in the country, founded in 1936. Past winners include luminaries such as Margaret Laurence, Mordecai Richler, Alice Munro, Timothy Findley, Margaret Atwood, and Michael Ondaatje.