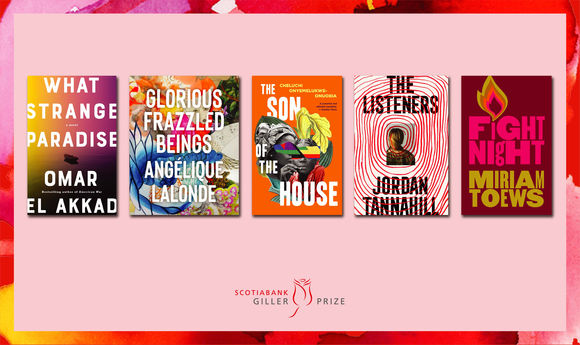 The Scotiabank Giller Prize has announced their five-title 2021 shortlist, featuring four novels and one short story collection. The list features books from two independent Canadian publishers (House of Anansi and Dundurn Press), two books from the Penguin Random House Group, and one from HarperCollins Canada.

The jury (made up of Canadian writers Zalika Reid-Benta (Jury Chair), Megan Gail Coles, and Joshua Whitehead, with Malaysian novelist Tash Aw, and American author Joshua Ferris) read 132 books and whittled their list down to the final five from a 12-title longlist.

We want to offer a special congratulations to Angélique Lalonde, who served as the September 2021 writer-in-residence at Open Book and is nominated for her debut story collection.

The popular Between the Pages event will return this year on November 4, 2021, at Koerner Hall. Hosted by Jael Richardson, it will be an hour of readings, questions, and answers with the five shortlisted authors.

The winner of the 28th Giller Prize, who will receive $100,000, will be announced at an in-person but reduced and socially distanced gala event in Toronto on November 8, 2021, hosted by Canadian actor Paul Sun-Hyung Lee and poet, artist, and performer Rupi Kaur. Readers can watch or listen via a CBC livestream, CBC TV and CBC Gem streaming, and CBC Radio One.