Journey Prize winner and filmmaker Alex Pugsley's debut novel, Aubrey McKee was hailed as whip-smart and funny, with comparisons drawn to the likes of Robertson Davies, John Irving, and J. D. Salinger. So there has been much excitement to see what he does next, and his new short fiction collection, Shimmer (Biblioasis) does not disappoint.

The ten stories in Shimmer were written over a 20 year period and it's clear Pugsley has whittled down to the best here. As characters weave in and out of the various stories, seen from different angles and perspectives in different pieces, truths both personal and universal are revealed.

We're excited to speak with Alex today about Shimmer, including talking about how the title story went from being rejected a dozen times to being award-nominated, about the story collections he read while writing and what they taught him, and about the collection's mysterious, and memorable, dedication. 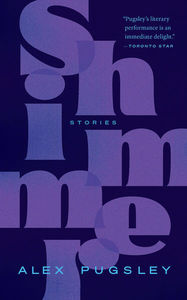 Although the sections of Aubrey McKee were written to be short stories, they all have the same narrator and they’re all about Halifax. The short stories in Shimmer are quite different. There is an assortment of narrators, of varying maturities, and the stories take place all over—Toronto, L.A., and Cape Breton, among other settings. They were written, and published in magazines, over the last twenty years.

There are links between them. Characters you see in one story, from one character’s point of view, you might see again in another story, at another time, and from a different point of view. The reader has an active relationship with regard to figuring out who someone is and what their life means. And structurally they’re similar because they’re written in vividly rendered dramatic scenes. They’re like one-act plays. I really like it when characters show who they are by what they say and do and choose.

I worked really hard on “Shimmer,” the title story. It’s about two teen girls who go to a big high school party. It’s intended as a companion piece to the very first story, “Deedee at the 7-Eleven,” which is about two teen boys who are going to the same party. They were written roughly at the same time but, although the 7-Eleven story got accepted by a journal pretty quickly, “Shimmer” was rejected twelve times over fourteen years. It got to the point where I thought, “Am I insane for thinking this story is good?” So when subTerrain finally accepted it, I was very, very grateful. The story later went on to be a finalist for Fiction at the National Magazine Awards and was included in that year’s Best Canadian Stories. So I’m glad I stuck with it. It became special to me. But that word, shimmer, is a thematic summation of the book, too, because it’s about the ways in which people shimmer in and out of each other’s lives.

Did I do specific research? Sort of. The character of Twyla, who appears in two of the stories in this collection, was originally supposed to be in a movie. After making a first feature (Dirty Singles), I decided I’d make another rom-com. So I wrote a script called Ridiculosity. It was about two twentysomething roommates, Lana and Robin. But I couldn’t get funding.

So I revamped the material as a TV series and wrote three of the episodes as part of the pitch package. One of the episodes was about Twyla, Lana’s older sister, when she breaks up with her boyfriend, needs a place to crash, and comes to live with Lana. That TV series, like the movie, was rejected everywhere, too. So I’d worked for years on these characters—figuring out who they were, how they spoke, what they wanted—only to have the project go nowhere.

When I originally submitted the Shimmer manuscript to Biblioasis, it was only seven stories. I knew I needed more. And that’s when I thought to rework the material from Ridiculosity—yet again—and to put Twyla in “Before the After Party” and to present her fully in her own story called, appropriately enough, “Twyla.”

I was reading some newish story collections—Stoop City, How You Were Born, Afterparties, What We Talk About When We Talk About Anne Frank—and some older ones—Nine Stories, Dance of the Happy Shades—as well as They Can’t Kill Us Until They Kill Us, which sort of feels like a story collection even though it’s an essay collection about music and culture and coming-of-age. In each, I paid attention to which sections were told in summary, which were dramatized as scenes, how was a through-line introduced and shaped, and where did the author allow herself or himself to be personally emotional. I also studied specifics like how to use adverbs to indicate tone in a dialogue exchange, what verbs were used to carry dialogue, how to minimize stage direction in order to preserve scenic momentum, and how to properly use colons, commas, and em-dashes before, after, and within runs of dialogue.

The dedication is as follows, “To the kid with the Mohawk in the airport in Tucson,” and readers, of course, will draw their own conclusions.

Alex Pugsley is a writer and filmmaker originally from Nova Scotia. A winner of the Writers’ Trust Journey Prize, his fiction has appeared in Brick, The Dalhousie Review, Eighteen Bridges, The New Quarterly, subTerrain, Taddle Creek, This Magazine, The Walrus, and, for the last three years, Best Canadian Stories.

In ten vividly told stories, Shimmer follows characters through relationships, within social norms, and across boundaries of all kinds as they shimmer into and out of each other’s lives.

Outside a 7-Eleven, teen boys Veeper and Wendell try to decide what to do with their night, though the thought of the rest of their lives doesn’t seem to have occurred to them. In Laurel Canyon, two movie stars try to decide if the affair they’re having might mean they like each other. When Byron, trying to figure out the chords of a song he likes, posts a question on a guitar website, he ends up meeting Jessica as well, a woman with her own difficult music. And when the snide and sharp-tongued Twyla agrees to try therapy, not even she would have imagined the results.