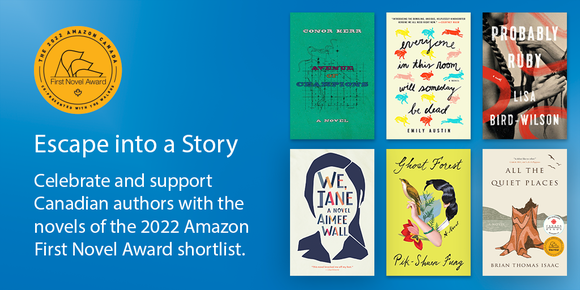 Yesterday, Amazon Canada and The Walrus announced the shortlist for the forty-sixth annual Amazon Canada First Novel Award, which rewards the debut novel judged to be the finest of the year based on literary merit. The award is open to first time novelists, including those who have published previously in other genres.

The winner receives $60,000 and each finalists will receive $6,000, making it one of the largest fiction awards in Canada.

The winner will be announced at the in-person award ceremony in Toronto on Wednesday, June 1. The event will be hosted by Jennifer Hollett, Executive Director of The Walrus and will include an appearance from Cherie Dimaline as the 2022 youth author special guest speaker.

Five years ago, the prize added a short story writing contest for young people, which is presented alongside the first novel award.

The short story award winner will receive $5,000 as well as a lunch with the editors of The Walrus, intended to provide mentorship and guidance for the emerging writer.

The 2022 judges for the awards are Suzette Mayr, Casey Plett, David A. Robertson, and Joshua Whitehead.