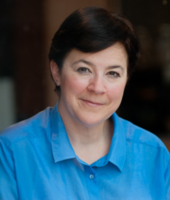 Andrée Poulin's Burying the Moon (Groundwood Books, illustrated by Sonali Zohra) tells the story of a young Indian girl whose courage changes the lives of all the girls and women in her village.

In Latika's rural village, there are no toilets, which means the women have to wait until night falls, when they can retreat to a field to relieve themselves. Not only are there hazards like scorpions and snakes, but the lack of sanitation can often lead to illness. And once a girl begins menstruating, the lack of toilets means she is forced to leave school, creating a cycle of where women's options are severely limited.

The taboo not to speak about any of this is powerful, but Latika sees an opportunity to change her fortune that of the whole village. A government representative is coming to visit, and if Latika can overcome the shame that's been ingrained in her to advocate for the construction of public toilets, she could change the course of her whole life.

The beauty of Sonali's Zohra's artwork makes this story of bravery a joy to read, and with period stigma still adversely effecting millions of girls and women worldwide, Burying the Moon is an essential read and a great way to discuss often-ignored questions of sanitation, menstruation, and equity with young readers.

We're thrilled to welcome Andrée, who previously worked in international development, to Open Book to discuss Burying the Moon. She tells us about why toilets became an impassioned subject for her, the book's evolution from picture book to middle grade verse novel, and her favourite part of the writing process.

Before becoming an author, I worked in international development, for a Canadian NGO that funded projects in India. I was lucky enough to go to India a number of times. It’s there that I learned that millions of people in India didn’t have access to a toilet. I thought it was an important issue and that one day I would like to write about it. That’s how I got the idea for Burying the Moon.

Be interested in other kids. Be curious about how people live in other parts of the world. Be grateful. Don’t take things for granted. Like toilets. 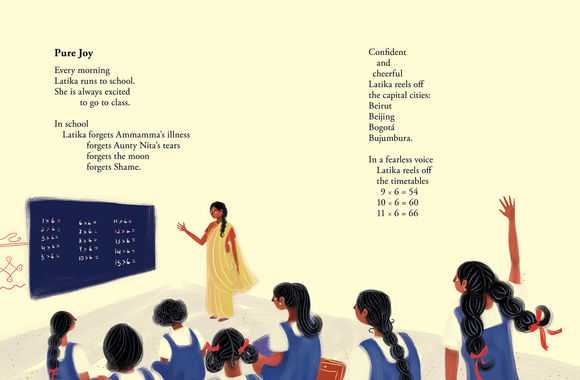 The first version of Burying the Moon was written as a picture book. It was 900 words long. The manuscript was refused by a publisher who very kindly wrote and said: ‘Your story is interesting but it’s too complex for a picture book.’ So, I decided to lengthen my story to make it a middle grade novel. At the time, I was reading free verse novels, mostly from British writers and I was captivated by this genre that was new to me. I thought, why not use poetry to tell my toilet story? I tried it and I loved it! And it became my very first free verse novel.

I don’t need much. A computer, a quiet room. The most important thing I need in order to write – and it’s a challenge for me – is concentration. To do meaningful writing, I need to unplug from social media.

For me, the toughest part is plotting. I’m a poor plotter. But the revisions are the fun part. I love the tweaking and the fine-tuning, maybe because I know it means the book is almost finished!

A middle-grade novel about the wild horses of Sable Island, Nova Scotia.

If she could, Andrée Poulin would read from morning to night. Her love of reading is what brought her to writing. After working as a journalist for many years, she went into international development.

Her picture books and novels, for children of various age: from 4 to 14 years, have won a few prizes and awards. Her stories deal with friendship, empathy, tolerance, poverty, and solidarity. Poulin believes books can change the world. By setting her stories in Canada, Africa, and Asia, she takes her readers on adventures in discovering other cultures.

Poulin loves to share her passion for reading and her pleasure for writing with children. She gives workshops for youth in schools and libraries.

A beautifully illustrated novel in verse about a young Indian girl who tackles the taboos around sanitation in her village.

In Latika’s village in rural India, there are no toilets. No toilets mean that the women have to wait until night to do their business in a field. There are scorpions and snakes in the field, and germs that make people sick. For the girls in the village, no toilets mean leaving school when they reach puberty.

No one in the village wants to talk about this shameful problem. But Latika has had enough. When a government representative visits their village, she sees her chance to make one of her dreams come true: the construction of public toilets, which would be safer for everybody in her village.

Burying the Moon shines a light on how a lack of access to sanitation facilities affects girls and women in many parts of the world.