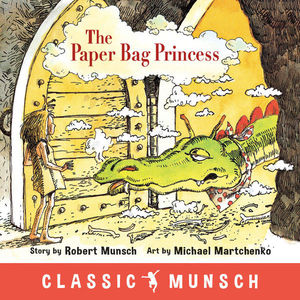 You'd be hard pressed to find a book lover between four and 40 who doesn't know The Paper Bag Princess. One of the most beloved of legendary children's author Robert Munsch's oeuvre, the book tells a story of the titular princess who rescues herself from a dragon, boots the shallow prince to the curb, and dances off half-dressed for her own happily ever after. Cheeky and revered for decades, and illustrated by Munsch's longtime book partner Michael Martchenko, it's hard to overstate the book's cultural impact.

So it's big news that Annick Press has, for the first time, optioned the book for film, specifically to Universal Pictures as a live-action movie.

Elizabeth Banks and Margot Robbie are producing with Banks slated to direct. WildBrain, who holds animation rights to the title, is a partner in the live action option.

Munsch himself confirmed that "[The] Paper Bag Princess is going to be a movie! Yes, Yes, Yes!" It's happy news for Munsch fans, who have shown an outpouring of support for the author after a recent interview with CBC, in which Munsch revealed that he has dementia.

First published in 1980, The Paper Bag Princess has sold over 7 million copies, been reprinted over 100 times, and been translated into over 20 languages. It even spawned Paper Bag Princess Week, leading up to Paper Bag Princess Day, where bookstores, libraries, and schools across North America hold events for kids to celebrate the self-assured Princess Elizabeth from the book and everything they have in common.

In recognition of the book's success, Annick recently published a 40th anniversary edition with a variety of special features including an afterword by Ann and Robert Munsch, a preface by Chelsea Clinton, and foreword by Francesca Segal.