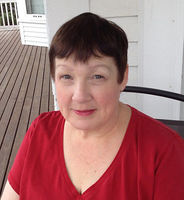 After decades of prophecy, the residents of a remote island have finally found what has been foretold: the Long Awaited, who will tell them their fate 17 days after appearing, has arrived in a boat drifting gently to their shores.

The only problem is that 11-year old Pascale, the person in the boat, has no idea where she is, how she got there, or what the Long Awaited is. The islanders are sure she's the one they've been waiting for, but all Pascale wants to do is get home to her family. When strange things begin to happen though, Pascale finds herself wondering if there might be some truth to the prophecies after all—and what it means for her if there is.

Award-winning author Valerie Sherrard's 30th novel for young readers, A Bend in the Breeze (DCB), tells Pascale's strange and moving story; one of acceptance and compassion in unexpected places. We're excited to share an excerpt from A Bend in the Breeze today, courtesy of DCB, an imprint of Cormorant Books.

In this passage from Sherrard's newest middle grade adventure, we witness Pascale's awkward first interaction with the islanders as a group, and meet Vimal, a boy whose longings for purpose unintentionally spell trouble for Pascale.

Excerpt from A Bend in the Breeze by Valerie Sherrard:

Chapter Three: The Sting of a Small Betrayal 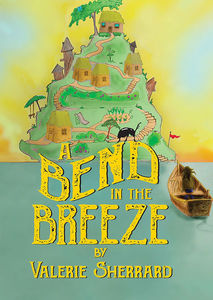 AS THE ELDERS waited for the Lookout to be located and brought to the Place of Matters, word continued to spread through the village. A stranger, possibly even the Long Awaited, was on the island! Men, women, and children stopped what they were doing and hurried to the meeting hall.

Inside that building, Pascale had been given a cushion and was sitting cross-legged, waiting as patiently as she could while the minutes crawled by. She was feeling less nervous than when she’d first arrived, but her general discomfort was growing. This was not surprising considering that every eye in the place was watching her.

Pascale could easily imagine what they must be thinking. Here she was, practically on display, in a condition that could only be described as bedraggled. It was unsettling to be openly stared at, unwashed and wearing garments she had been in for days and days. And her hair! A filthy, tangled mess!

It wasn’t just the general grime of her appearance either. While it hadn’t been so noticeable in the open air, indoors and surrounded by villagers, Pascale was growing increasingly aware that she smelled horrid.

She knew she was not to blame for this, and yet she could not escape the feeling of shame that crept over her. She wished she could shrink down to the size of her beetle and scurry out of sight!

No one approached her to speak, which she would have much preferred to the gawking. Even so, as strains of conversation reached Pascale, she began to better understand why everyone was so interested in her.

From what she heard, Pascale learned that there had not been a single outsider on the shores of this island since it was first settled many, many years ago. Not one. She was not just a stranger, she was the only stranger — ever! Why would they not stare? She was a curiosity, a new face in a place where everyone had known each other all of their lives.

From the other side of the room, Vimal Riverstone observed the crowd’s fascination with Pascale and, as he watched, envy stirred in his heart. Only moments earlier he had been close to the middle of it all, but now he was on the side, forgotten.

That did not seem fair. Of anything that had ever happened on TeJÉ, this was by far the most sensational. And after all, the girl had come to his home first!

Not only that, but as the events had unfolded — when they’d walked with Pascale to the Place of Matters and his mother told the Elders the astonishing news that a stranger had come to TeJÉ — Vimal had felt close to the center of it all.

Oh, how thrilling it had been to feel important!

Who could blame him for wanting to stand in the spotlight for just a little longer? Really, anyone might have been tempted to do exactly what Vimal did next.

“I bet no one would believe what we saw,” he said to Sofia, loudly enough to be heard by anyone nearby.

“I just don’t know if we should tell anyone,” he said craftily.

His words had the desired effect. Heads were turning and already a circle of villagers was easing toward them.

“Tell them what?” Sofia said.

Vimal pressed a finger to his lips and because she adored her brother, Sofia obediently fell silent.

It only took a moment or two before a small gathering of curious faces pressed close and hushed voices began urging Vimal to disclose whatever it was he had seen.

Several times he looked as though he was about to speak, only to cast his eyes down and hesitate at the last second.

However, this could only sustain the crowd’s interest for so long. Despite his efforts to draw out the moment, his small audience quickly grew restless and demanded that he stop teasing them and finish whatever he’d started to say.

Vimal felt suddenly trapped. He wished he could take his words back, but of course it was too late. So he lifted his head and slowly drew in a deep breath.

“The strange thing is this: the girl, that is, Pascale, has a black beetle — in her hair,” Vimal said at last, his voice hushed. “On purpose, mind you.”

There were immediate murmurs all around him.

“A beetle? In her hair? Whatever for?”

“It was with her on the boat that drifted here. She seems to have made something of a pet of the thing.”

Vimal paused, looking from face to face of those huddled around him. “She’s even given it a name. She calls it Inch.”

There were more exclamations over this news. Most bugs were nothing more than a nuisance to the villagers. Pascale’s affection for a beetle struck them as decidedly peculiar.

It took Vimal only a few minutes to tell them everything he could remember about the beetle. And then, as soon as it was apparent he had nothing further to share, his audience was gone.

The news about Inch raced around the room in whispers and snickers.

“The girl has adopted a bug as a pet. Imagine it!”

“Can you believe she’s even given it a name! Inch or Pinch or some such thing.”

And while Vimal had taken care to divulge what he knew in a lowered voice, others were not so careful. Before long, words heavy with scorn reached Pascale’s ears.

“The Riverstone child says there’s a beetle in her hair. A beetle! And that she wants it there!”

Pascale rose slowly to her feet, troubled by what she had just heard. It was not difficult for her to figure out which of the Riverstone children was spreading this bit of gossip, but she could not fathom why. Was it possible she had offended or upset Vimal? Surely there must be some reason that he would be making fun of her behind her back.

She scanned the room and found him standing alone. It seemed that his eyes met hers for just a second, but before she could be certain, he turned away.

And then, as she was wondering whether or not she should speak to him about it, her attention was drawn to a commotion at the entrance door.

At last, the island Lookout had arrived.

Excerpt from A Bend in the Breeze by Valerie Sherrard, a middle-grade novel published by DCB, an imprint of Cormorant Books. Copyright 2022, Valerie Sherrard. Reprinted with permission.

Valerie Sherrard is an award-winning author of picture books and young adult novels. Her novel The Glory Wind won the Geoffrey Bilson Award for Historical Fiction and the Ann Connor Brimer Award. Her works have been chosen as Red Maple and White Pine Award Honour Books and she has been nominated for the Manitoba Young Readers’ Choice Award and Snow Willow Award. Born in Moose Jaw, Saskatchewan, she now lives in Miramichi, New Brunswick.

A Bend in the Breeze

When eleven-year-old Pascale Chardon finds herself on a lifeboat drifting toward an uncharted island with no memory of how she got there, all she wants is to get back to her family. The islanders, however, have a different objective

At first Pascale is sure she’s not the Long Awaited, but when strange happenings occur, she finds it impossible to be certain of anything. Could she be the Long Awaited after all?

A Bend in the Breeze, award-winning author Valerie Sherrard’s 30th novel, is a delightful tale about the importance of love and compassion.