Historian Lucille H. Campey knows what she is talking about when it comes to studying the movements of people between countries — her PhD is in emigration history. Her passion paid off when her most recent book, Atlantic Canada's Irish Immigrants: A Fish and Timber Story (Dundurn Press), won the 2016 Prix du Québec.

Countless thousands of Canadians have Irish ancestors, many of whom came over during the famed Potato Famine, an event which Campey examines in her book, questioning traditional assumption about the crisis. Tracing some 90,000 transplants to Atlantic Canada, she explores their reasons for leaving Ireland and the surprising motivations, beyond the Potato Famine, that drove them to the New World and why they settled where they did. Bursting with new research, Atlantic Canada's Irish Immigrants is a missing chapter in the story of many Canadian families.

Today we welcome Lucille to Open Book as part of our At the Desk series, where we get the chance to look at the spaces where authors create their books, be they home offices, kichen tables, coffeeshops, writing retreats, or otherwise.

Lucille shows us the desk that has inspired her for (nearly) an astounding 50 years and charts its journey around the UK and how it charted her adventures both academic and literary.

I have had my leather-topped desk since 1968. It was purchased a year after I had moved to England and married Geoff. Having been bought to go in the study of our first house in a place called Oliver’s Battery (named after Oliver Cromwell) near Winchester, it has followed us around Britain as we have moved from place to place. Like us, it will be celebrating its fiftieth anniversary soon — or more precisely — its fiftieth year of being my desk. 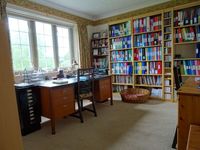 My desk followed me initially from Hampshire to Cheshire as we moved house to suit Geoff’s changing job locations. Having graduated in chemistry from Ottawa University, I found that I could work at home as a research analyst. But when we moved to Yorkshire the history-loving side of me took over. Studying medieval settlement patterns in northern England, my desk got a good work-out and I obtained an M. Phil. from the University of Leeds. A few years later politics beckoned and I landed a job with the Conservative Party’s Research Department in London and, following this, I became a special adviser to the Secretary of State for Health. However, things changed dramatically in 1994 when Geoff retired. We were both free to take on new challenges and Scotland beckoned. Once again my desk came with us.

My father’s Scottish roots had long inspired me to learn more about Scottish emigration to Canada. So I signed up as an external student at the University of Aberdeen. Geoff helped with the computer and data handling work while I searched Scottish archives for material. We lived in Tain in the Scottish Highlands, a place with-crystal-clear air and wondrous birdlife. I drove from Tain to Aberdeen every three months or so along the malt whisky trail in Speyside to pursue my studies, but mostly I worked at my desk. It saw me through four wonderful years. It occupied a first-floor room with a balcony. I could see the camomile lawn down below and in the distance were banks of enormous Scottish pines. We had bats living nearby and several owls kept a close eye on us. It was an idyllic period and I ended up with a PhD.

Having obtained my doctorate in 1998, Geoff and I moved to Dinton in Wiltshire. We had to wait for about four months until our new home was ready; so I was temporarily without my desk. However, for the first time in many years I had time to spare. So I used the time to write my first book — A Very Fine Class of Immigrants: Prince Edward Island’s Scottish Pioneers. Looking back, I now realize that lady luck had tapped on the shoulder. I was well and truly hooked on writing. We moved into our house in Dinton and I never looked back.

Dinton is a beautiful village just west of Salisbury. We have an Iron Age hill-fort, Roman fortifications and roads, medieval and Tudor buildings and a huge stately home with parkland, which is open to the public. Like the rest of Britain, Dinton is steeped in history.

My study overlooks a lawn framed by large trees. Former American Air force hangars, once used to house supplies for the D Day landings during the Second World War, lie hidden on the other side of the fence. General Eisenhower’s command headquarters were just up the road in the ancient county town of Wilton.