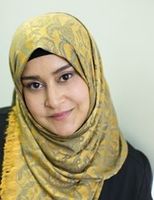 Canada's most innovative literary festival, the FOLD (the festival of literary diversity) continues to evolve and add new elements every year. One of the brand new additions for 2019 is the festival's first ever writer-in-residence program, and acclaimed writer for young readers and educator S.K. Ali is the first author to fill the position.

The author of Love from A to Z (Simon & Schuster Canada), Ali is an award-nominated writer, a parent, and a teacher. We got to talk to her about her books, teaching, and experiences writing dynamic young Muslim characters.

She tells us about the lack of diverse literature for young readers in Canada (and how enthusiastically fresh new stories are embraced when kids have the opportunity to read them), what she's excited to do with her platform as the FOLD's WIR this year, and what she imagines (and hopes) for the future of the festival.

This is the inaugural year for the writer-in-residence program at the FOLD. What does being selected mean for you at this point in your life? Where were you when you received the news?

When I received the news, I was deep into edits for my second novel, Love from A to Z, with a tight turn-around deadline, so it didn’t really sink in. It was only after I’d submitted my completed manuscript that I took a breath and re-read everything about the FOLD program and immediately, an airplane-banner of WOW I CAN’T BELIEVE THIS began running through my brain over and over. (A side note: writers on editing/deadline-brain are not regular humans so when I look back on how I responded to the email telling me I was FOLD’s writer-in-residence, I am ASHAMED.)

Of course it’s a tremendous honour and I take it very seriously. Besides being an author, I’m an educator and I love the idea of sharing what little I know/gathered/gleaned from my short years authoring thus far and the lot I’ve gained from slowly learning about writing through years -- both in pursuing a degree in Creative Writing a long time ago and in my recent quest to understand how to write a novel, satisfying in both prose and plot, enjoyed by both critics and general readers, that sweet spot I’ve been going for my whole writing career. So getting to be a writer-in-residence at this point is immensely rewarding.

Can you share a little about your experience of diversity (or barriers to diversity) in Canadian literature, both as a writer and reader?

For this, I will speak about children’s literature and my Canadian experience of it as an elementary school teacher, as a mother, and as a reader. Though I began my career as a teacher over 20 years ago with an intent to incorporate books that represent humanity in its diversity, I’ve found it very hard to stock my classroom with enough titles! And it hasn’t changed that much in recent years.

I strongly believe all kids deserve books with a wide variety of characters – i.e. not just schools with “diverse” populations – but unfortunately, such books are rare. When they do exist, they are often “lesson” or “issue” books, often put into bins to be pulled and taught during Black History Month or for social studies units. It’s frustrating when I think about my classroom libraries over the years and what actually happens to books that have authentic, engaging and accessible narratives featuring marginalized characters: they become tattered with love; which leads to the question: since they’re so beloved by kids, why aren’t there more?

(From hence, a host of rhetorical questions will spew, an awful tendency of mine when I’m agitated.)

In terms of books featuring marginalized identities, like Muslims, why are we still seeing these being written by authors not of that background? Speaking specifically about Muslim representation, why is this the case especially in Canadian publishing? And why do these published narratives tend to feature the plight of a Muslim girl abroad in need of saving – so much so that even Muslim writers feel the urge to write to this expectation?

Do we or don’t we need kids to connect to their reading? Educators and literacy experts know that connection is key to growing as a reader so what are we doing when we deny students titles they can connect to?

When my children were growing up, I remember the two instances when my son, as a pre-teen, deeply connected with a book (other than the fun enjoyment of fast-read titles): one featured an Asian protagonist and another a Black lead. They were both published in the U.S. It was similar with my daughter – the titles featuring characters she connected with on a deeper, identity-based level all came from the U.S.

Having experienced this predicament over the years is one of the reasons I knew I wanted to be published in the U.S. Not that publishers in the US don’t contribute to the recycling of Sad Muslim Girl Abroad narratives – but I just knew there was also a clamoring for titles pushing the envelope, books breaking new ground, confrontational texts upending the status quo happening south of us and I wanted in on that .

Your first book, Saints and Misfits, really resonated with readers. What were you hoping to create in your story and characters as you worked on the book?

I wanted to tell a story about a girl awakening to the power of her voice, set in the aftermath of sexual assault. And I wanted her to be a teen girl grappling with commonplace issues like a sudden crush and family troubles and issues of identity. And I wanted her to be a North American Muslim girl because we exist and it was beyond time we got to roam our own books. Since its publication, I’ve been overjoyed to see that Saints and Misfits has resonated with so many readers. Last year I was at a large, multi-school book club and so many teens came up to me to tell me that it was the very first time they’d seen themselves in a book. And these young people were of various backgrounds and it stunned me – the diversity of young readers who’d never seen themselves represented before, in this day and age.

What are your goals in terms of the FOLD writer-in-residence program? Is there anything in particular for which you're excited about using the platform?

My goal is to share my journey so that other writers – particularly writers feeling a sense of powerlessness, be that due to a marginalized identity, or due to an inner block or issues of self-doubt or something else – see that it’s possible to tell stories and get published and fulfill their writerly dreams. I want to provide the nuts and bolts in concrete ways (like how to plan and organize narrative structure) as well as how to keep going internally, how to cultivate the drive to achieve publishing goals. I hope to help other writers in tangible and inspirational ways – because I personally got that kind of support in order to get published myself.

As an educator, my passion comes from the core belief that everyone has the potential to realize their goals and I transfer that belief to this role as a writer-in-residence.

Summer Bird Blue by Akemi Dawn Bowman is YA novel I read recently and loved. It’s a portrait of grief, focusing on a biracial Asian- and Pacific Islander–American teen as she tries to navigate the world after the loss of her sister. It’s beautiful and deals with pain, family dynamics and new relationships forged in the wake of tragedy, including an intergenerational friendship.

Your new book, Love From A to Z , is out shortly. Can you tell us a little bit about it, and about the anticipation as you wait for the pub date?

Love from A to Z is a YA novel about two teens, one Canadian (Adam), the other American (Zayneb), who meet on a plane on their way to spend spring break in Doha, a city in the Arabian gulf. The thing they don't know about each other is that they've both been keeping "Marvels and Oddities" journals, recording the amazing and not-so-amazing things in the world. When they meet, they're at low points in their lives, and the story traces whether they're meant to meet each other or not, whether they're marvels or oddities in each other's worlds.

Love from A to Z releases on April 30 and in the lead up, I’ve been touched by the reviews of young Muslim readers who’ve had the chance to read it ahead of time through early review copies (ARCs). Every single review has moved me to tears because I remember the feeling of not seeing myself represented as a teen and, while it’s a good thing that these young people are seeing a difference now, it still hurts to see them share their joy at this simple act of being seen .

How do you imagine the FOLD looking in fifteen or twenty years? What would you love to see in the festival's future?

I would love to see it take centre stage in Canadian publishing, in CanLit – where it belongs! (That’s not to say it has to leave Brampton heheh!) I want to see it celebrated in all literary circles! Sorry for all the exclamation marks but it’s an amazing festival where those of us marginalized feel empowered, a safe space, and I want that feeling of security and confidence to move to the centre so that more writers and creatives can feel cherished! If you haven’t visited before, drop by and see why it’s such a hub for fresh, exciting talent.

S.K. Ali is the author of the novel Saints and Misfits, a finalist for the American Library Association’s 2018 William C. Morris award. Her debut novel won critical acclaim for its ground-breaking portrayal of an unapologetic Muslim-American teen’s life. S.K. holds a degree in Creative Writing from York University and has written about Muslim life for various outlets, including the Toronto Star and NBC News. Her second novel, Love From A to Z, a story about finding love in the time of Islamophobia, will be published in May of 2019 by Simon & Schuster. She has also co-authored a picture book coming out in 2019 about first day hijabs, published by Little, Brown and Company. S. K. Ali lives in Toronto with her family and a very vocal cat named Yeti.