If the eye-catching title of Francine Cunningham's debut short story collection—God Isn't Here Today (Invisible Publishing)—wasn't enough to signal a bold, irreverent, powerful new writer, the stories themselves would have no trouble doing so.

With a cast that includes the likes of the last woman on earth, a frustrated incubus, and an ice cream driver losing his mind due to his truck's sinister jingle, the scenarios Cunningham crafts show a writer capable of delightfully balancing play and dread, insight and humour, all with a razor sharp wit. Impactful and wild creatively, these stories are as elegant as they are unique.

God Isn't Here Today is the kind of singular collection that begs for a sample over a description, so we are excited to get to share an excerpt here today, courtesy of Invisible Publishing. Here, an unnamed narrator traces their relationship's trajectory in a non-linear, mesmerizing, and fantastical series of scenes, showcasing Cunningham's lyrical, tough, and memorable prose. 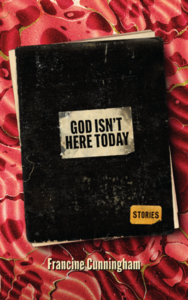 I. You thought the fly was still alive because it kept pulsating—no, squirming—over the white of the laminate floor. But when it got closer, you realized it was only moving because of the maggots pushing their way through its corpse. White bodies were squeezing through the cracks in the flesh like dozens of blackheads popping at once. You yearned to lean closer, to put your ear against the tiny stomach cavity, hear the crunch as they broke through. But you kept still, watched from where you’d lain down on the floor, as they inched their way toward you. Your body too heavy to move and meet their wiggling bodies in their forward crawl.

II. In high school I would spy on him as he sprinted furtively across the cement behind the school. He would wait to emerge from the rusty back door until everyone had gotten bored of waiting for him, and then he would pump his legs and streak, like a multicoloured universe, across the thick pad that penned us in all day. I hid and watched because of his translucent skin. You could see through it like it was a Vietnamese shrimp roll. The lettuce and carrots of his inner workings were constantly in motion—quivering, expanding, living. He was like a little rabbit out of its den, trembling with fear, and for good reason. There were always kids waiting for him somewhere. They would beat him, turning his skin from clear to deep red as vessels broke. Blood blooming like flowering tea. Bruises would spread over his translucent forehead like ink spilled on satin. It would feather at the edges.

III. You felt the heart from the inside. You had to you cut lower than you expected you’d need to. You cut under the rib cage, through the elastic skin there. You pushed and pushed and pushed. You broke the diaphragm, you kept going. You let the miniature flashlight strapped to your wrist guide you through the web of veins and arteries. You moved between the lungs, which had stopped inflating and deflating. It was slippery, because our insides are slippery, and it was warmer than you expected. But you found the heart eventually. It’s firmer than you thought it’d be. You ran your fingers over it, squeezed it. The pooling thickness of the blood stayed under your nails.

IV. The first time I let him put his translucent fingers inside me, tears dripped down my cheeks. He flicked his tongue over the saltiness. I could see the muscles of his jaw flex, watched as his tongue flicked in and out of his mouth past the barricade of white teeth. I could feel the hard ends of his fingertips as they moved in me, and I was crying because he would never be able to see himself like I saw him. When he undressed that first time and pulled away the layers that obscured his skin, I could feel his fear through the barely-there hair on his skin. His trembling was like a seismic reading, illuminating the vibrations deep within his chest cavity. I could see the glow from the lamp behind him. I wanted him to make me bleed for the first time. I wanted to see him streaked with my blood, for it to blend into the bruised flowers on his skin. After, while he was asleep on the floor, I took out my camera and photographed the evidence of our sex. The way our veins had started to grow together, tangled beneath our skin.

V. You slipped your tongue inside his dead mouth. If you had waited too long after death, all you’d have felt was hardness, but the skin was still warm. The body had not yet leaked brown fluid. You wanted to kiss him one last time before his body hit that magic moment when the skin starts to slip. You stuck your tongue in far enough to see yourself doing it.

VI. I began to associate the stares of people on the streets with our love. There was a secret way we moved through the world. It was just me and his skin. I began to name specific veins, grew familiar with their particular pulsing, tracked their pathways through him. There were no more ink stains to get lost in now, though; his tormentors had moved on to new prey.

VII. You realize it’s easier to love someone after they’re dead. You don’t have to deal with anything but the purity of your love. Entwined in your memories and in the space beside his body, you can sleep soundly. With every memory you relive in your mind, with every slide of your finger down his cold cheek, your love only gets stronger.

VIII. And then he hit me with the words that would tear me from him: he said he needed to be away from me. His skin bloomed red over branch-like lines as he forced out the words through those same trembling lips I had pushed against my own so many times before. When he grabbed my mug of hot lemon tea and smashed it against our kitchen tile. I felt pain then, in the same secret place inside of me where fire had raced at his touch. I stretched out my hands, felt my nails dig in as blood pooled into the crescents. He pulled back, but I held on. You can’t separate things that have been melded together without destroying them both. It’s impossible. He knew this. You could see he knew it in the way his adrenaline pushed blood through his throbbing veins. I wasn’t going to let that separation happen. I picked up a shard of the broken mug and sunk it into the translucent skin I loved.

IX. The cloudy whiteness of his eyes reflects your image. Your hands roam his body as he rests stiff beside you. They wouldn’t stop, your hands, now that they can travel wherever they want. You press your lips against his cold ones. You won’t have to live apart ever again. This was the truest of love you’d ever felt.

X. You left the window open an inch. You need a scrap of life outside the walls of your room. But only a scrap, a sliver, really: a tree’s discarded spores, stray laughter from the street, wind carrying the cold. His translucent skin becomes marred by a buzzing black dot. Your hand flings out in a burst of frenzied energy, pinning the fly to the floor, its tiny body a vibration up your arm.

Francine Cunningham is an award-winning Indigenous writer, artist and educator. God Isn’t Here Today is her debut collection of short fiction, and her debut book of poems On/Me (Caitlin Press) was nominated for the BC and Yukon Book Prize, the Indigenous Voices Awards, and the Vancouver Book Award. She is a winner of the Indigenous Voices Award in the 2019 Unpublished Prose Category and of The Hnatyshyn Foundation’s REVEAL Indigenous Art Award. Her fiction has appeared in The Best Canadian Short Stories 2021, in Grain Magazine as the 2018 Short Prose Award winner, on The Malahat Review’s Far Horizons Prose shortlist, and in Joyland Magazine, The Puritan and elsewhere. Francine is a graduate of the Creative Writing MFA program at the University of British Columbia, and currently resides in Alberta. Learn more at www.francinecunningham.ca.

Driven by desperation into moments of transformation, Cunningham’s characters are presented with moments of choice—some for the better and some for the worse. A young man goes to God’s office downtown for advice; a woman discovers she is the last human on Earth; an ice cream vendor is driven insane by his truck’s song; an ageing stripper uses undergarments to enact her escape plan; an incubus tires of his professional grind; and a young woman inherits a power that has survived genocide, but comes with a burden of its own.

Even as they flirt with the fantastic, Cunningham’s stories unfold with the innate elegance of a spring fern, reminding us of the inherent dualities in human nature—and that redemption can arise where we least expect it.