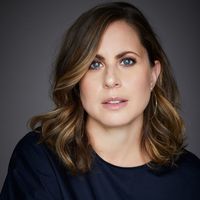 Pretty much every kid has felt at some point that they don't quite fit in. For Pauline, the lovable protagonist of Anouk Mahiout's debut graphic novel, A Place for Pauline (Groundwood Books, illustrated by Marjolaine Perreten) that feeling is literal.

In her big, busy family's tight-packed house, sometimes it feels like there actually isn't room for Pauline to fit. So when she finds a secret spot that's just for her, Pauline treasures it fiercely, using it to launch imaginative journeys to places she could be her expansive, adventurous self – like France, where her grandmother lives and where Pauline longs to visit.

But for all the pressures of being the eldest child in a big family, where she is asked to help out with her siblings one minute and to leave them alone the next, Pauline soon finds her beloved nook begins to feel a little lonely.

Genuinely funny, relatable, and authentic, A Place for Pauline is a debut to love, and one that anyone with a family of any size will connect with. We're excited to speak with Anouk about her story today, including her collaboration with illustrator Marjolaine Perreten, who brought Pauline to live on the page.

She tells us about the aspects of Pauline she pulled from her own happily chaotic childhood, why it's just as important to give space for tough emotions in kids' books as positive ones, and about the journey from shock to delight when she first saw Pauline in the artwork. 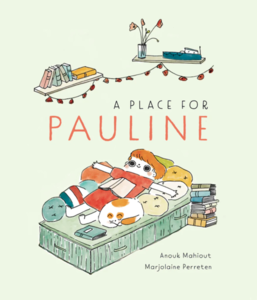 A Place for Pauline is my first book. I studied literature and I’ve been writing for a long time, but it was only recently that I realized I wished some of my stories were published. When my son was born, I started to reminisce about my childhood feelings and memories. That’s how the idea for Pauline came about. Just like me, Pauline is the eldest of a family of four. She sometimes feels a little out of place in her crowded house. So she starts to fantasize about wide open and far away spaces or possible worlds where she can feel a stronger sense of belonging. But it’s not long before she realizes that despite all her struggles, her family is really where she belongs. Pauline’s also a bit of a drama queen and the whimsical (and sometimes bittersweet) humour in the book was inspired by my own family. Marjolaine Perreten, the illustrator, masterfully played with that.

As a reader, I prefer when the message in a book is subtle enough to resonate differently in everyone’s mind. As a writer of children’s books, however, it’s important to me to make space in my book for emotions that might make us uncomfortable, like sadness, jealousy, anger, or fear. I noticed that we are conditioned to repress these emotions from a very young age and that makes us ashamed of them, when in fact they give us a very important sense of boundaries and help us understand ourselves better. I love to dive into those slightly darker areas. Using humour also helps to downplay the drama and turn it into something funny. The other major theme in my writing is the importance of imagination. Growing up, I realized that my imagination was a haven, a hideaway, a place where I could find solutions to my problems. It’s something that is still very useful to me as an adult.

Did the book look the same in the end as you originally envisioned it when you started working, or did it change through the writing process?

Between the very first version of the manuscript and the book, the story changed a lot. The little hideaway, which was at first a very minor aspect of the story, became more and more central and interesting to explore. So much so that it is now something that is central in the other Pauline stories that I’m writing. The second book of Pauline’s adventures is about to be published in French and I’m currently writing the third. The other major change came when I received the storyboard from Marjolaine. To discover Pauline as a little redhead with a cat was a pretty huge shock to me. I’m of Algerian descent so I imagined Pauline and her family more like mine, with dark hair and tanned skin and I’m also utterly allergic to cats! But after the first shock, I discovered all the talent Marjolaine has of being able to show in just a few strokes all the emotion and poetry of Pauline. Now I love that little redhead and wouldn’t want her to be any different!

There are two parts that I particularly love. The writing process is not something that is easy for me. There’s a lot of resistance on my part! But once in a while, I have the feeling that I’m really onto something. A particularly good idea or a turn of phrase that I like. When I get that feeling, I’m filled with joy. It makes it all worthwhile! The other part that I love is when I have the chance to talk with readers and listen to their stories. A few weeks after the launch of A Place for Pauline in French, a woman reached out to me online. She wrote a long and heartfelt message to tell me how much she recognized herself in Pauline’s struggles. She was living abroad for a few months and was really wondering where she belonged. Reading A Place for Pauline, she told me, soothed her and helped her make the big move she was afraid to make. That message meant so much to me. It confirmed I was myself in the right place and that I should continue writing.

It took a long time before I decided to write for a living but now that the ice is broken, I’m writing a lot and for a lot of different mediums. I’m working on the TV adaptation of the Pauline series and on other TV scripts as well. Beside the Pauline book series, I have another children’s book that will be published next year. It’s called “Jamais contente”, a French expression that we use to talk about a person who has a hard time feeling joy and happiness. I can sometimes relate to that! It’s a whole other project, but one that also explores uncomfortable emotions!

Anouk Mahiout  is an author and TV screenwriter living in Montreal, Quebec. She obtained a master's degree in literature in 2002 (Université du Québec à Montréal), then turned to television, where she worked as a producer and screenwriter for various broadcasts. In 2020, after a year of studying humorous writing (École nationale de l’humour), she created the Pauline series. Pauline, une petite place pour moi, the French edition of A Place for Pauline, won the Prix des libraires du Québec in 2021. She is now working on the animated version.

A Place for Pauline

As the eldest child in a large family, Pauline struggles to find her niche, and she longs for peace and quiet — a charming story in graphic-novel style.

Pauline lives with her mother, father, little brother and sister, and there’s a new baby on the way. Her friends tell her she’s lucky to be the eldest — she’s the one who gets new clothes and can stay up late — but Pauline isn’t so sure. In her busy, crowded, noisy house, she never knows what she’s supposed to do. One minute she’s told to help her little sister, and the next to leave her alone! It seems like she’s never in the right place at the right time, and her brother seems determined to prevent her from reading in peace.

So Pauline finds a secret hideaway, and in this quiet place, surrounded by her precious belongings, she can read her favorite books, make up stories and imagine being as free as a bird. But most of all, she dreams of sailing off to France where her grandmother lives, and one day she decides to do just that …

Funny and touching, this story highlights the importance of finding our place, while gently exploring feelings about solitude, freedom, independence and the comforts of home.