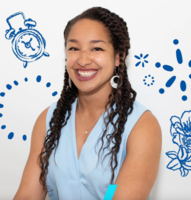 We may not think of cities as places filled with wildlife, but when we look a little closer, you can see how the wild world exists alongside the urban one, from coyotes and bats to bees and weather patterns.

Dr. Cylita Guy pulls back the curtain on the wild world inside our cities in her first middle grade nonfiction book, Chasing Bats and Tracking Rats: Urban Ecology, Community Science, and How We Share Our Cities (Annick Press, illustrated by Cornelia Li), a fascinating journey through urban ecology.

Incorporating STEM, social justice, and environmental concerns, Chasing Bats and Tracking Rats is an incredible book to introduce young readers to the complexities and possibilities of sharing a world with animals, plants, and insects, as well as one another.

Guy collaborated with 10 fellow scientists in the book's creation, bringing a diverse mix of perspectives and insights. Packed with fun facts and little known scientific tools (from a "ratmobile" to a bug vacuum), it will delight the most curious young readers in your life.

We're speaking with Dr. Guy today to hear about how and why Chasing Bats and Tracking Rats came to be. She tells us about the time she was caught with bats down her shirt, how tough it was to narrow down the list of scientists she included in the book, and why getting moving is part of her writing process.

Chasing Bats and Tracking Rats introduces readers to the field of urban ecology – the study of nature in cities – through the stories and work of eleven scientists. Each chapter focuses on the research and questions being explored by a scientist, beginning with a story from the field. For example, I share a story about the time I was caught by the police with bats down my shirt. The main text of chapters covers the hypotheses and methods that scientists use to study city nature, with sidebars full of related science content. Chapters end with urban ecology challenges for readers – tasks meant to get them outside, exploring, and learning about their own local biodiversity. Covering everything from bats to bees and microplastics to trees, Chasing Bats and Tracking Rats, is an introduction to some of the amazing nature in our cities and the scientists who study it.

This book came about when I pitched Annick an idea for a nonfiction book centred around how scientists study bats in cities. The team at Annick loved the idea, but had so many questions about the work of other urban ecologists and how studying city nature could help us build better cities. Based on their questions I expanded my proposal to talk about some of the other amazing work being done by urban ecologists – and the idea for Chasing Bats and Tracking Rats was born!

I myself am an urban ecologist, I studied bats living in the city of Toronto, Ontario as part of my PhD. I’m also a nature fanatic and love exploring the amazing biodiversity in my own neighbourhood. Learning about the wonderful worlds of the creatures and plants we share this planet with is just so amazing – so I was excited to write a book about this topic to help others discover their own love of the natural world.

Through the stories and work of different scientists, Chasing Bats and Tracking Rats, is really trying to showcase how different scientists are answering the question, “How does living so close to humans impact city nature, and how does living so close to this nature affect us”. This question stayed constant throughout the process as it was one of the original questions the Annick team asked me during my initial proposal review.

Research for this book was a lot of fun. I got the opportunity to sit down and read a lot of academic papers to learn about the cool work of other scientists in this field. I had to narrow down a very long list of potential scientists and research that I could have written about. In the end I interviewed ten scientists about their work. Not only did we talk about their science, but I also asked them to share a couple of exciting stories from their fieldwork. From there I did more independent reading and research to craft the chapters into what they became.

I was surprised the most by how many of the scientists I interview shared that the results of their research were often the opposite of what they expected when they first began their studies! I think it just goes to show how surprising and puzzling doing science can be.

Personally, I’m all for the hyphen. It may seem a little odd, but my brain has a much easier time reading non-fiction than nonfiction!

I’m really big on physical activity. When I’m unable to focus or don’t feel that great about the direction my writing is going, I find getting myself moving in some way helps. I like to run, climb, or lift weights. Each of these activities requires my concentration, but during breaks there is also time for my mind to wander. This mix of focus on something other than writing, with breaks to think about whatever, often helps me come up with great ideas or solutions to problems I was struggling with. I also leave my workouts feeling refreshed and energized, ready to put some of those ideas down on paper.

I started by trying to tackle the book in the order it appears for readers, but in the end it didn’t quite come together in that way. I wrote the introduction and chapter one – which focuses on my own work with bats – first. This was in part because these two sections of the book cover content that I was most familiar with. However, as I began to flush out other chapters about other scientists’ work, I left chapters where I knew less about that scientist’s area of expertise for last. This was because they took longer for me to research and write. In a couple of cases I also had to ask the scientists I interviewed follow up questions to really make sure what I was writing appropriately captured their work.

I’m currently working on flushing out some proposals for more nonfiction science books – aimed at the middle grade. I’d love to write more about how scientists study animal behaviour or use remotely collected data to learn about our planet. When not writing, I’m also working on getting myself back into rock climbing. I’m looking forward to the possibility of travelling in 2022 for some outdoor trips!

Cylita Guy completed her PhD at the University of Toronto where she studied bats as carriers of viruses. After finishing an Insight Data Science Fellowship she now works as a data scientist in insurtech. An experienced science communicator, Dr. Guy spent ten years working as a Host at the Ontario Science Centre. She has appeared on T.V. and radio, started a children's community science program with the High Park Nature Centre, and is one of the founding members of ComSciCon Canada (Canada's first science communication conference for graduate students). As a workshop facilitator and educational consultant Dr. Guy helps other individuals and organizations make their science accessible. Cylita's first children's book, Chasing Bats & Tracking Rats, is published by Annick Press.

Chasing Bats and Tracking Rats: Urban Ecology, Community Science, and How We Share Our Cities

What can city bees tell us about climate change? How are we changing coyote behavior? And what the heck is a science bike? Featuring the work of a diverse group of eleven scientists—herself included!—Dr. Cylita Guy shows how studying urban wildlife can help us make cities around the world healthier for all of their inhabitants. In the process, Guy reveals how social injustices like racism can affect not only how scientists study city wildlife, but also where urban critters are likelier to thrive. Sidebars include intriguing animal facts and the often-wacky tools used by urban ecologists, from a ratmobile to a bug vacuum. Cornelia Li’s engaging illustrations bring the scientists’ fieldwork adventures to life, while urban ecology challenges encourage readers to look for signs of wildlife in their own neighborhoods.