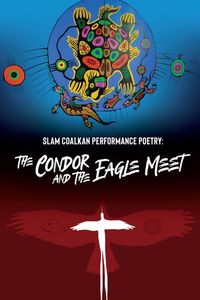 Back in 2021, the Festival of the Peripheries (FLUP) in Rio de Janeiro, Brazil and the Toronto International Festival of Authors (TIFA) came together to stage a spectacular poetry happening: 17 Indigenous spoken word artists from both North and South America collaborated to perform their works at the festivals, resulting in historic poetic events. Knowing that many spoken word fans had missed the FLUP/TIFA performances though, Kegedonce Press, together with TIFA, has stepped in to offer a record of this groundbreaking collaboration, in the form of Slam Coalkan Performance Poetry: the Condor and the Eagle Meet, edited by Jennifer Alicia Murrin and Renata Tupinambá.

Spoken word however, is primarily a performance form, and the words on the page may not contain the full impact of a writer's achievement. Slam Coalkam Performance Poetry brilliant solves that issue by creatively including QR codes so that readers can also watch many of the actual festival performance online with a simple scan.

Filled with heartcries of resistance, interrogations of colonialism, racism, transphobia, and passionate, witty, dazzling wordplay, Slam Coalkam takes its subtitle from a prophecy of the Condor of the South and the Eagle of the North, representing Indigenous peoples across what we currently call the Americas.

We're excited to share an excerpt here today, with links to the performances that are available online, courtesy of Kegedonce Press.

it has and will always exist
this identity is ancient

They ask me why am I so angry
I tell them I am angry because I love myself
My body is of the dirt of the earth and the morning dew that glistens on
our rocky beaches
I tell them I am a reflection of my homelands and ask: if land was stolen,
how much of my life is valued?
I am an extension of my family, my community, my Nation, the land, all
of creation And I love fiercely
I tell them this is a century old storm and it can no longer be contained
Do not make the mistake of telling me my rage is not welcome
I wasn’t asking for permission
We are in a constant state of boundaries being broken just like the treaties.
We know there is no consent in colonialism
It’s happening right here, right now, coast to coast in this nice place called
Canada They tell me they can’t help what their ancestors have done
Tell me to leave the past in the past while crumbles of thanksgiving dinner
falls out of their mouths
And all I wanna tell them is to stuff it
I tell them I am angry because I am exhausted from clenching my fists
It was only recently while the world slowed down that I truly had the
space to check in with myself
And I realized that most of my life my body has been tense
We are constantly negotiating safety in a society that wants us to be
productive citizens or dead
If I can carry all of this trauma, then I also carry resilience
I am descendent of dignified ancestors who now speak through me
Rippling through frequencies to make ears bleed
This rage is not my own to hold
I tell them I am striving to be a good ancestor
I am not afraid to light the match and watch it all go up in flames
Burn the paternalistic politrick regime to the ground
and watch all the Crown clowns go up in smoke
I am responsible to speak up and speak out and keep speaking on it until
all that is left from my rage is love.
They ask me why am I so angry
How could you not be?

From Above My Indigenous Village

from above my Indigenous village
we see life and barely know
if it’s of life
people down there live off.
from up here,
we are right in front of the sea
as if we were face to face
but how to face?
one’s voice is heard.
a loud one, waves have voices.
coming from far and going far away,
I let the thoughts digress...

from up here it’s like not being.
and pay attention, cause if a stranger
breaks into, attack!
self-defence, you may call it.
it’s all ours and has always been ours.
now it’s all theirs, including death.
they belong so much to each other that they kill and kill, and kill.
not only earth, but human nature bleeds.
and in the end it doesn’t even fit the bills anymore
for everything that bleeds poetry I will wash away.
and in addition, in regret,
in crying... the one who is left
is the one who has something in common with the poets.
the pain of feeling and narrating.

Today, we excavate the innocence hidden beneath faceless institutions
Repeating – till you show us what you mean by
Every child matters.
Until it sits on your tongue too.
So comfortably that it goes beyond pleasantries
becomes embedded in our policies
... what Canadians want to see
Something that is true.
Slowly, we unbox the secrets as we mediate our shame
The truths that still hold our pain
They are significant
Without exception
They are us
Like children
Our most honest reflections
Memories constructed by blinders
systemic neglect
A reminder of how far you will go to protect
Canada.
Residential schools are but one example
Of our failure to respect humanity
We want to feel the foundation shift from this paradigm
Heal with our relations as we lift our hearts through this time
Of truth telling, hiy hiy.
Transcend into reconciliation
A place of belongingness
Beyond systemic alienation
We know
That the power to govern is the power to heal. So your mandates
for extraction
Are still a big deal.
We demand to gain traction
to feel the wheel
Take mindful action
To reveal
We have always been enough

Renata Tupinambá's Indigenous name is Aratykyra, she is a journalist, producer, poet, consultant, curator, screen-writer and visual artist. She founded the Indigenous production company Originárias Produções. Collaborator of the Visibilidade Indígena network. For 15 years she has been working with the dissemination of Indigenous culture and ethnocommunication. She has been on the Curating Council of TV Cultura – Fundação Padre Anchieta since 2020. She is a member of the Amotara Zabelê in Bahia, a school of ancestral knowledge in Tupinambá territory in the Una municipality. Creator of the Originárias podcast, the first podcast of interviews with Indigenous artists and musicians in Brazil, which is a part of PodSim, a group of female-led podcasts. Co-founded Rádio Yandê, the first Brazilian Indigenous web radio. Curator of the Festival Corpos da Terra – images of Indigenous peoples in Brazilian cinema (2021). Curator of the second screening of Etnomídia indígena (2021). Curator of the Festival de Música indígena, at CCVM’s Indígenas BR 2021 festival. Curator of the first Brazilian festival of contemporary Indigenous music, by Rádio Yandê, at Unibes Cultural in São Paulo (2019).

Slam Coalkan Performance Poetry: the Condor and the Eagle Meet

In 2021, seventeen Indigenous spoken word artists from North and South America performed their works at Festival of the Peripheries (FLUP) in Rio de Janeiro, Brazil and Toronto International Festival of Authors (TIFA) in Toronto, Canada. This anthology, featuring poems from each of the performers, is the result of this remarkable cross-border collaboration. Digitally enhanced with QR codes, Slam Coalkan  links readers to the poets’ performances at the festivals.

From these pages the poets sing their hopes and their dreams. These are the voices of resistance, voices that speak out against the evils of colonialism, racism, transphobia, and genocide. Voices that cry, shout, whisper and roar passionate messages to the world.