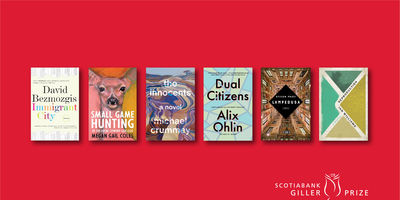 Today the Scotiabank Giller Prize narrowed its 12-title longlist to just six titles. The 2019 jury with the tough task of whittling down the list is made up of Donna Bailey Nurse, Randy Boyagoda (jury chair), Aminatta Forna, Aleksandar (Sasha) Hemon, and José Teodoro. Publishers across the country submitted 117 novels and short stories collections for consideration.

Margaret Atwood's The Testaments, which has seen widespread coverage this season, was notably absent from the shortlist, as well as past her fellow past Giller Prize winner André Alexis' Days by Moonlight. Alix Ohlin and Michael Crummey are now the only writers to appear on both the Giller and Rogers Prize lists this year (Alexis is also nominated for the Rogers Prize).

Independent presses, which made up 50% of the longlist, are now represented solely by House of Anansi Press, with two titles out of six, with the remaining titles published by HarperCollins Canada and imprints of Penguin Random House Canada.

The winner, who will receive a cool $100,000, will be announced at a gala in Toronto on November 18, 2019. Each of the shortlisted finalists will receive $10,000. As in past years, the event will air live on CBC, so be sure to tune in and cheer on your chosen author.