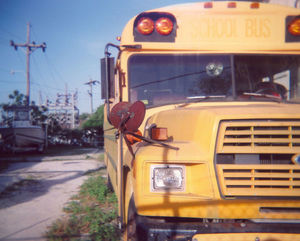 There's nothing like back to school season - warm days, cool nights, crisp new school supplies ready to get dog-eared with use.

Even long after we're past school age, the start of September can still exercise a hold over us; the feeling of starting something new. So to get you in that school spirit, we've rounded up a list of incredible school-centric Canadian fiction.

Whether you're returning to school yourself, walking or dropping the students in your life there, or just feeling nostalgic for the hallowed halls of education, here are ten books (plus an essential bonus title) for different ages and with different views of the school experience to take you into September and beyond.

The Tamaki cousins' first graphic novel collaboration was a huge hit, with its frank depictions of sexual desire, queer identity, mental health, suicide, and more. Written for a YA audience but captivating for readers of all ages, Skim's story of an outsider at a private Toronto girl's school remains timely, moving, funny, and smart.

Brian Francis is one of CanLit's best kept secrets, and his debut novel, Fruit, is a funny, unforgettable story of a boy and his nipples. Peter Paddington is already having a tough time at school - then his nipples start talking to him. Even worse, they've threatened to tell everyone at school about Peter's most closely guarded secret.

3. The Youth of God by Hassan Ghedi Santur (Mawenzi House)

In Santur's second novel, protagonist Nuur is 17-years old, whip-smart, and at a crossroads as he grows up in Toronto's Somali community. A beloved teacher is encouraging the teen to academic greatness, while a conservative iman urges Nuur to more deeply explore his Muslim faith. Caught between head and heart, The Youth of God is a student story, a story of identity, and a thoughtful portrait of the the Somali diaspora.

4. The Kiss of the Fur Queen by Tomson Highway (Anchor Canada)

Highway's acclaimed novel is much more than a school story, following brothers Champion and Ooneemeetoo Okimasis through their lives from northern Manitoba to Toronto and beyond. But much of the story centres on their experience - and the painful legacy - of being torn from their family and enrolled in a residential school. The Kiss of the Fur Queen is one of CanLit's best writers operating at the top of his game as well as one of the most powerful and unflinching depictions of Canada's shameful and abusive actions in residential schools.

Nominated for a slew of prizes when it was published, Mayr's Monoceros features a cast of characters connected by a student who has recently died by suicide. His classmates, his guidance counsellor, his principal, and others try to muddle through in the aftermath of his death, wondering what they might have done and how the student's death will effect the school going forward. Balancing dark humour and tragedy as only Mayr can, Monoceros is both poignant and fresh.

No one does school-centric books quite like Gordon Korman, who was still a student himself when he started his iconic MacDonald Hall series; he was just 14 when This Can't Be Happening at Macdonald Hall, the first instalment, was published. While Korman's more than 80 books make it hard to choose just one, Beware the Fish, the third MacDonald Hall book, is a perennial favourite that sees protagonists Bruno and Boots haphazardly trying to help solve the school's budgetary issues with wacky radio broadcasts, the world's largest tin can pyramid, and other hijinks.

Nelson's Blood Brothers is a stark reminder of how access and education can be a central deciding factor in the options available to kids and teens. Two friends, both graffiti artists, come to a parting of ways when Jakub is offered a scholarship to a prestigious private school. Meanwhile, Lincoln is facing pressure to join the same gang his brother belongs to. Their diverging paths come crashing back together when the gang decides Jakub knows too much about a recent killing and tasks Lincoln with shutting him up - for good.

8. Words that Start with B by Vikki VanSickle (Scholastic Canada)

Kicking off an acclaimed middle grade series, Words that Start with B follows Clarissa Delaney through the trials and tribulations of seventh grade. Her favourite teacher is off for a year, her best friend Benji has a secret, and scariest of all, her mother has been given a diagnosis that just has to be wrong. Plucky Clarissa is a heroine to cheer for, and though VanSickle covers serious subjects including cancer, LGBTQ identity, bullying, and more, Words that Start with B is so full of heart that it elicits just as many laughs as tears.

Award-winning novelist and short story writer Moore moved into young adult fiction with Flannery, where the main character has a lot on her mind - a single mom struggling to the pay the bills, a best friend entranced by a bad boyfriend, and her own crush up and disappearing. Plus, she's got that pesky final project to worry about. When she creates a love potion for her project, it's mostly a lark - until word spreads that it actually works, which is impossible... right? Flannery is charming, wise, and funny; a sharp portrait of a tough age.

Ali is one of the most compulsively readable new voices in young CanLit, with her first YA offering, Saints and Misfits, ringing true as a classic coming-of-age story. Janna, the speaker in Saints and Misfits is a bookish, observant Hijabi teen who sorts everyone in her life into the titular categories (plus 'monsters') and crushes on a non-Muslim boy named Jeremy. When a traumatic event leaves her lost and confused, she finds the strength to examine herself, her faith, her family, and more.

Is any list of Canadian school books complete without Anne? From inkpots to bosom friends, Canada's iconic redheaded student (and later teacher) is in many ways the blueprint for countless school stories to follow. Give into the nostalgia and dig out your old copy as the weather turns cool.

Do you have your own favourite Canadian school-centric book or story? Tell us on Twitter!