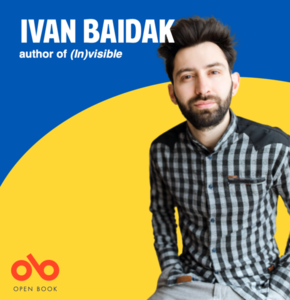 In just his early thirties, Ivan Baidak has already established himself as a literary superstar in Ukraine, with his novels and short stories winning critical acclaim while at the same time topping bestseller lists. His frank, raw explorations of identity, acceptance, and human connection have earned him international praise, and now his newest novel, In(visible), is available in English translation from Guernica Editions.

(In)visible follows Adam, a young designer who has Tourette's syndrome, and the people he meets in a support group. Anna, who has a facial hemangioma, Marta, who has alopecia, and Eva, who has vitiligo, are each fascinating and complex characters, and when Adam abruptly moves into a shared home with them just a week after meeting, the attractions and tensions, sympathies and differences, are cranked up.

A deeply absorbing portrayal of who is seen and how, of taking up space and becoming oneself, and of disability, health, and tolerance, (In)visible is authentic, incisive, and wise. Baidak draws on his own experience living with Tourette's syndrome to explore Adam's experiences and relationships in the novel, which was named the Best Book of 2020 by PEN Ukraine.

We got the opportunity to speak with Ivan about his new novel and the heavy responsibility felt by Ukrainian writers as their country defends itself against Russia's war.

He tells us about what he hopes to communicate about life with a disability through his characters, why this would have been a very different book if he had written it just a few years ago, and what it is like to be part of the Ukrainian literary community right now.

Adam and his friends all live with some kind of physical divergence in their lives (in Adam’s case, Tourette’s syndrome). What did you want to explore about difference and, as referenced in the title, visibility through these characters? 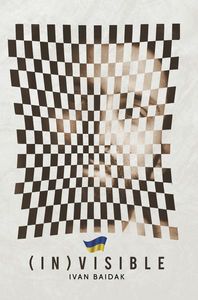 In this book, I shared what I managed to learn throughout my life about what it's like to live with a physical divergence, and gave my advice to society on how to better perceive and treat people with disabilities. I tried to show that life with a disability or disorder is beautiful and worth living.

What was the process of drawing on your own personal experiences like, both on an emotional level and in terms of your writer’s craft?

The process was well established and thought out. I knew what I wanted to write about and I was ready to tackle it. I want to stress that if this book had been written a few years earlier it would have been a book of regrets, self pity, and depression, all with very dark vibes. But now in my life and as an author I have put all my thoughts and reflections on Tourette’s onto the right shelves, and thanks to this the book that I wrote was warm and inspiring instead. I managed to go through all the drawbacks of living with a disability and learn to find opportunities instead.

How do you identify with the different characters in the group? Apart from Adam, was there a character with whom you particularly connected?

Before writing this book, I conducted about 20 interviews with different people who had some sort of disability or disorder. It was interesting to find that everyone had similar experiences, considering the characteristics of their conditions were different. Therefore, I was able to create one collective hero. My protagonists differ mainly in their attitudes towards their flaws, so besides Adam, I would say that I most connect with Anna, she often uses irony and has an ease of being that I see also in my own behaviour.

This book deeply explores the idea of friendship and the need for connection. Friendship is sometimes overlooked in favour of family and romantic bonds in fiction, but it is so interesting to read about. Why did you decide to explore friendship in this way?

I wouldn't say that the theme of friendship is key in the work, but rather unity in general, and understanding that it is always easier to overcome various difficulties together. Finding support and acceptance. I may have subconsciously built the book around this theme, since I myself am generally a very open person. Also, friendship is always a choice. And we generally choose to befriend those who are similar to us in some way. We cannot choose our parents or siblings, and when it comes to love, we can often be driven by irrationality :) In the case of friendship, it is always a conscious choice, or at least an intuitive one.

What is it like to be writing as part of the Ukrainian literary community right now? Do you have any thoughts on the role of fiction writers during wartime?

My country is going through a really difficult but at the same time historic time. Very often now I choose my country over my personal needs. For example, during various meetings, 90% of the time I still talk about the war, and not about my work. I consider this to be the priority of every Ukrainian at the moment.

I write daily notes about the war. I am sure that during the next 10 years our creativity will be mostly filled with a focus on nationality and themes of war. I consider it my mission to talk about Ukraine abroad. To help foreigners better understand my country.

What will you be working on next? Or if you will be taking a break between writing projects, how do you feel about getting back into a book project when the time comes?

The war changed all of my plans. Including creative ones. I have no other thoughts at this time. Only war. I wake up in the morning and read the news, watch the feeds throughout the day and fall asleep after checking the news. It is difficult to think about novel plots, stories, and heroes.
I currently have around ten separate book outlines. I work on the one that I feel more at a specific moment. I don't know what the next book will be. In general, yes. I alternate between periods of writing and living life.

Іvan Baidak (born in 1990) is a daring Ukrainian fiction writer whose debut novel Personally Me Personally for You (2013) became a national bestseller and garnered excellent critical reviews. His two short story collections, Role Plays (2014) and The Shadows of Our Dates (2017), topped bookstore bestseller lists. His novel A Man With My Name (2019) was excellent proof of the writer’s maturity. In 2020, he wrote a novel about inclusion, (In)visible, which was recognized as one of the best in 2020 according to PEN Ukraine. A theatre play and several photo exhibitions were staged based on the book.

Originally from Ukraine, he’s lived in many places across the world, including Poland, Austria, Mexico, and the United States. His short stories have been translated into English, German, Serbian, Polish, Spanish, and Italian, and presented at European literary festivals. In 2019, the author's debut Euro-tour took place, during which Ivan visited Warsaw, Krakow, Wroclaw, Prague, Berlin, Munich and Paris. He received a scholarship from Gaude Polonia 2020. He left Lviv in early 2022 and was hosted by Camargo Foundation in Cassis, France, and Slovenian Writers Association in Bled, Slovenia.

Diagnosed with Tourette's syndrome as a teenager, Adam, now a 26-year-old freelance designer, attends his first meeting at a social support group. Here he meets Anna, a charity worker with a facial hemangioma; Marta, a TV anchor with alopecia; and Eva, a make up artist with vitiligo. The following week he moves in with them.

Shaped after the writer's own experience of living with Tourette's syndrome, Adam tries to move from self inflicted invisibility to being visible--in his family, career, and personal life.

The most recent bestseller of Ukrainian author Ivan Baidak and Best Book of 2020 according to PEN Ukraine, (In)visible is a book about what it means to be different. A book that encourages acceptance and tolerance. A book about fear and escape, about the necessity of being loved and accepted. It's about the permanent struggle with your complexes and attempts to start loving yourself. It's about hard stories. But also about big hearts.