In Indra Ramayan's Mud Lilies (Cormorant Books), we meet Chanie Nyrider who, at just 18, has already survived four years in the darkest corners of Edmonton. After escaping her abusive parents and with no options, she's scraped by as a sex worker, with her wits and determination her only tools as she navigated choices no child should have to face.

But her most recent choice is one that means she finally has a reason to hope; after being arrested, she reluctantly chooses to enrol in a high school programme for troubled youth. Not only does she avoid jail time that would have been incredibly unjust, but she has the chance to finally get some of the support and opportunities she should have been given years ago. Just when things are looking up though, the one person she's trusted becomes suddenly dangerous.

Harrowing, hopeful, and informed by Ramayan's own experiences as a runaway to Edmonton, Mud Lilies is a hymn to the power of one young woman's defiant spark of life, a story of grit and wisdom set against a backdrop of cruelty and indifference.

We're speaking to Indra today about the intense process of writing Mud Lilies, her first novel. She tells us about why the Edmonton setting was essential to the story, about dedicating the book to her heroes—"teachers, dancers, working girls, friends, and acquaintances"—, and about a fervent week-long rewrite session that turned her condo into a "private writing cave". 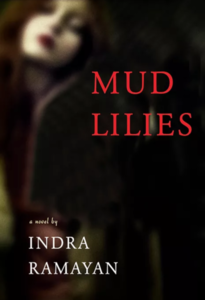 Mud Lilies started as a first chapter submission in a creative writing course. I’d had the original opening lines in my head for some time and decided to use the assignment as a creative testing ground to see where it would go. I had no idea that I’d be immersed in the lives of my characters for the next two years as I worked through numerous drafts and revisions. My professor, Dr. Angie Abdou, was a great influence. She encouraged me to take the book to the finish line and gave me the confidence I needed to work through the tough times and believe in the end goal.

I didn’t initially choose a firm setting because I wasn’t sure where I wanted the novel to be. In the early drafts, I’d pictured the novel in Edmonton, Alberta, but hadn’t fully committed to it. This became apparent in the first revision with my publisher. The setting needed to be stronger. This turned out to be one of the most fun and rewarding writing experiences I’ve ever had. I put the dog in the truck, and we headed out on settings excursions. I went to all the places that reminded me of when I first came to Edmonton as a teenage runaway. I took many pictures and spent a lot of time integrating specific settings into the novel, including some of the places closest to my heart such as the Hotel MacDonald and the Legislature.

The final paragraph of the ending is the original from the first draft, but I did shorten the initial ending by about three pages. The original had included a follow up on some of the characters and was a bit idealistic. It felt contrived and not organic. The new ending flowed very naturally after the first edits with my publisher.

Hope and heroes hide in the darkest of places.

My most memorable experience comes from when I was pushing really hard in the final stages of the first draft. I was working a lot, so I was often exhausted. But my commitment to the book was non-negotiable. I took a week off and worked day and night to get it finished. There were a lot of late nights, caffeine, and takeout food. I closed out the world and turned my condo into a private writing cave where it was just me, the manuscript, and the dog. Looking back, it feels like a magical time in another world – a time I reflect upon with great love and nostalgia.

I dedicated Mud Lilies to my heroes as a tribute to the key people in my life who have encouraged and believed in me. Teachers, dancers, working girls, friends, and acquaintances. While many of these individuals may not know how powerful their influence has been, they have been game changers. Their faith, encouragement, and support have sparked life-changing moments. They have resurrected my low spirits and inspired higher paths. They have saved me from drowning in discouragement and negative self-talk. They have provided opposition to the negative and harmful messages of my childhood. In my heart, they are magicians who lit up my inner world and helped me forge paths on very difficult journeys. They are my heroes. This novel was inspired from my gratitude and love for their compassion and humanity.

I learned that if you have a deep longing to write, you must follow it. Writing is a long, hard, and sometimes lonely road, but the rewards of creation are priceless. It takes devotion and grit, and it’s easy to get discouraged. I’ve also learned that it’s okay to get tired. That doesn’t make you less of a writer. Sometimes stepping back for a few days, or longer, if necessary, is also part of the process. Self-care is essential.

The biggest takeaway is my recognition of how blessed I am to have such a deep love for writing. It is something that I can’t help but do. I am lucky to have a passion and a purpose that makes me feel alive. Writing inspires me and helps me to see the wonder of nature and the everyday world. I also learned that having discipline and a deep love for your passions will always reward you.

Indra Ramayan believes in the magic of love poems and the power of daydreams. Inspired by her wild past and writers such as Heather O’Neill and Angie Abdou, Indra wrote her first novel, Mud Lilies, while studying creative writing at Athabasca University. Ramayan is a graduate of the Humber School for Writers and is on the board of directors of YouthWrite Society Canada. She lives in Edmonton, Alberta with a Boston Terrier named Bodhi.

The night fourteen-year-old Chanie Nyrider ran away from her abusive parents, she was saved by an older woman who eventually offered Chanie a new life working as a prostitute. With nowhere to turn, Chanie was drawn into Edmonton’s dark underbelly, where she survived until arrested four years later. She was given two options: jail or a high school program for troubled youth.

Chanie reluctantly agrees to attend the program so that she can maintain her freedom and get to know her new love interest, Blue. As she begins to make strides in the program and friends who share similar circumstance, her home life deteriorates. Blue becomes unstable, deceitful, and eventually violent. He is not the man she thought he was.

Mud Lilies is the powerful story of a young woman finding a path of hope in the darkest of places and defiantly choosing to pursue it.