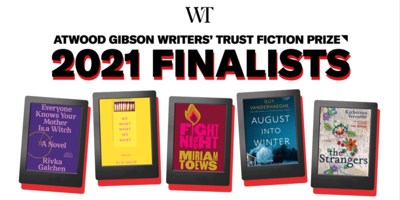 Starting in 2021, the $60,000 prize is generously funded by businessman and philanthropist Jim Balsillie. In its previous iterations the prize has been awarded since 1997, with past winners including Austin Clarke, Alice Munro, and Lawrence Hill.

The 2021 list features seriously decorated writers, with all five finalists having won and been nominated for numerous major awards in the past. Indeed, nominee Miriam Toews has won this particular prize twice, and fellow nominees Alix Ohlin, Rivka Galchan, and Katherena Vermette have been nominated (with Ohlin having been nominated twice). Amongst the nominees, other past honours include Governor General's Awards, the Amazon.ca First Novel Award, Giller Prize nominations, and much more.

This year's shortlist was selected by jurors Rebecca Fisseha, Michelle Good, and Steven Price. The winner will be announced on Wednesday, November 3 as part of the livestreamed Writers' Trust Awards.

The finalists are spread fairly far across the country with Ohlin in Vancouver, Toews in Toronto, Vanderhaeghe in Saskatoon, and Vermette in Winnipeg, as well as New York City-based Galchen.

Three of the five titles are published by imprints of Penguin Random House Canada, with the two remaining titles published by an imprint of HarperCollins Canada and the independent Toronto based House of Anansi Press respectively.

Stay tuned to Open Book for more prize news throughout the fall season.