In As You Were (Biblioasis), the debut novel from acclaimed Irish poet and playwright Elaine Feeney, Sinead Hynes has a secret that no one can find out. Even when she arrives in hospital, she keeps her secret from the colourful cast of fellow patients she meets and even her own husband and sons.

As the pressure mounts though, Feeney takes readers on a journey with Sinead that is both personal to the young property developer's condition, trauma, and circumstance, while also touching on numerous aspects of Irish culture and recent history.

Funny, tough, and full of brilliantly executed formal innovation (with Sinead's story and personal history communicated through text messages, overheard conversations, Google searches, and more, as well as Feeney's searing prose), As You Were is a story about personal agency, women's bodies, and how truth will out one way or another.

As You Were was a bona fide hit in Feeney's home county, featured on numerous best of lists, including The Guardian, The Observer and The Irish Times, and shortlisted for Novel of the Year at the Irish Book Awards. Now, thanks to Biblioasis, the novel is available for Canadian readers.

Today we're speaking with Elaine as part of our Long Story interview series for novelists. With her signature humour and verve, she tells us about how being "tired of [her] own company" led her to writing in a new genre, how her favourite character's voice was inspired by a short story from an iconic author, and how her sons offered her some cheeky and less-than-motivating encouragement while she wrote.

Do you remember how you first started this novel or the very first bit of writing you did from it? 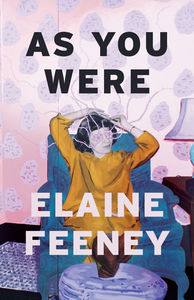 In 2014 I ended up in hospital with sepsis after having ignored a sickness. I was in recovery at home, rattling around the house on my own when I started to write As You Were. I live in the countryside on the west coast of Ireland in a town called Athenry where I grew up, plonked among fields with cows and sheep. Suddenly the silence of recovery was almost unbearable. I was sick of the TV and unable to read, I started to notice the world around me. Despite having grown up here, I hadn’t taken note of the colours and the sounds in some time, and the innervating beauty and resilience of nature inspired me to begin writing – not that any of that made it into As You Were. I had published four collections of poetry, and a drama, but after my illness these forms didn’t encompass what I wanted to do with As You Were. Poetry is often charmed with the self, and I had tired of my own company. I needed characters.

Also, Ireland was at a very energetic political stage between 2015 and present. We had a referendum in 2015 and voted for Marriage Equality, historic church abuse was being recounted daily on the media, and we were now campaigning to Repeal the Eight Amendment to the constitution to allow abortion access. It was a frenetic time. The fragmented style of As You Were mirrored this energy.

When I developed a crew of characters, almost in a Dickensian sense of sitting about the house chatting to me, I’d start to play voices off against each other, and so began As You Were.

How did you choose the setting of your novel, what connection, if any did you have to the setting when you began writing?

The novel is influenced by time spent in hospitals, however, I am also interested in institutions and the idea of setting work in a confined, claustrophobic space. I love Hitchcock’s Rear Window, and am drawn to Plato’s The Cave, Hamlet’s soliloquy’s, and the precinct-drama - spaces where people who wouldn’t ordinarily interact are thrust together. The opposite of the modern echo chamber.  The way humans interact with each other intrigues me - the rhythms, musicality of speech, and gesture. The notion of community versus the individual.

Also, I thought I’d make it easy for myself and keep everyone in the same space, however this turned out to have quite the opposite effect. There are not many original and exciting ways people in hospital get up and out of bed, they just mostly go to the loo or sit out on a chair.

Did the ending of your novel change through your drafts?

The ending was difficult. I kept creating distractions from the tragic arc of the protagonist, Sinéad Hynes. I always knew what was going to happen to her, but I didn’t want to face her demise (this isn’t a spoiler - we learn of her fate on the first page of the novel). It took me some time to work up the courage to get into that space; to take her out of the safety of the coven of women she was with in the hospital setting.

I was influenced by Tobias Wollf’s extraordinary ending in his 1995 short story, Bullet in the Brain when I eventually tackled the ending. I was also influenced by Molly Bloom’s soliloquy in the final episode of Ulysses and Mike McCormack’s brilliant character, Marcus Conway in Solar Bones. At various stages writing the ending I was in dialogue with these characters to some extent.

I am the kind of writer where nothing is ever finished, and I am never happy with anything I write so eventually I abandoned it, and put my faith in my editor.

Did you find yourself having a favourite character and why?

My favourite character is Jane Lohan. It appears that Jane, an octogenarian, has dementia and has been abandoned in the hospital by her children. The voice of Jane was influenced by Roald Dahl’s character of the landlady in his short stories for adults, Kiss Kiss. I read that story when I was a teenager and her voice fascinated me. I wrote Jane in a similar voice to this macabre and devious, but likeable character of the landlady. Jane is mostly astray, flipping from these mad moments of incredible lucidity to entire disconnect with the world around her. She has no official diagnosis, and often acts out the most bizarre impulses. Her spirit is extraordinarily resilient.

I love that Jane doesn’t suffer anymore from the same shame as some of the other characters, and in that way Jane is free. Of course, this is just my perspective of her, and writing her she was very wilful, and was so stubborn. I could not manipulate her into doing something she didn’t want to do.

Ireland’s past has treated her very harshly.

What was the strangest or most memorable experience or moment during the writing process for you?

As You Were took years to write, and sometimes after a long session at my desk I’d get extremely cold and I’d have to go and lie down and sleep. It was a strange sensation for me.

Did you celebrate finishing your final draft or any other millstones during the writing process? If so, how?

My novel had been written for quite some time before I was approached by my agent, Peter Straus, quite out of the blue. He’d heard from another writer that I had written a novel. I had originally sent the manuscript to one agent almost a year previous, and I hadn’t been given a definitive yes or no from her, and had put it all on the long finger. I am always motivated to write, but rarely good at following up with the business end of things. Peter asked if he could read it, and offered me representation very shortly after. This was a game changer in many respects for me. I celebrated like I do everything - with whiskey, followed by a heavy dose of imposter syndrome and panic.

I dedicated As You Were to Jack & Finn, my teenage sons. Finn told me no one would read a novel set entirely in a hospital, and I should give up, as he shoved his Stephen King books at me. Jack made me tea and told me that someday he might read it, but realistically, he probably wouldn’t.

Elaine Feeney is an award-winning writer from Galway and teaches at The National University of Ireland, Galway. She has published three collections of poetry, including The Radio was Gospel and Rise and the award-winning drama, WRoNGHEADED with The Liz Roche Company. As You Were, her debut novel, was published in 2020 by Vintage in the UK and in 2021 by Biblioasis in North America. It was shortlisted for Novel of the Year at the Irish Book Awards and was included in The Guardian’s top debut novels for 2020. It appeared widely in best books of 2020 including in The Telegraph, The Irish Independent, The Evening Standard, The Guardian, The Observer and The Irish Times.

Sinead Hynes is a tough, driven, funny young property developer with a terrifying secret. No-one knows it: not her fellow patients in a failing hospital, and certainly not her family. She has confided only in Google and a shiny magpie. But she can’t go on like this, tirelessly trying to outstrip her past and in mortal fear of her future. Across the ward, Margaret Rose is running her chaotic family from her rose-gold Nokia. In the neighbouring bed, Jane, rarely but piercingly lucid, is searching for a decent bra and for someone to listen. And Sinead needs them both.

As You Were is about intimate histories, institutional failures, the kindness of strangers, and the darkly present past of modern Ireland; about women’s stories and women’s struggles; about seizing the moment to be free. Wildly funny, desperately tragic, inventive and irrepressible, As You Were introduces a brilliant voice in Irish fiction with a book that is absolutely of our times.