The irresistible protagonist of Jodi Carmichael's The U-nique Lou Fox (Pajama Press), Louisa Elizabeth Fitzhenry-O’Shaughnessy, is going to be a playwright, and nothing can stop her. Not her overlong name (she prefers Lou Fox, thank you very much), not her ADHD, and not her dyslexia. But for all her determination, Lou is up against some tough challenges, including the formidable Shadow Phantom, aka Mrs. Snyder, her fifth grade teacher.

We got to talk to Jodi, who has won numerous awards for her writing for young people, about The U-nique Lou Fox and the responsibilities that come with writing about and for kids whose thought processes work differently than others'.

She tells us about the exact day that Lou sprang into "existence", discusses the thrill of writing without an outline, and shares her incredible ADHD and dyslexia research reading list, as well as her own personal connection to challenges and gifts like Lou's. 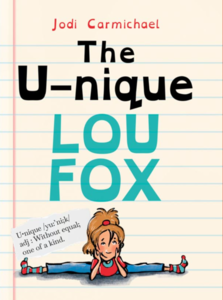 I remember it very clearly as new characters most often come to me out of the blue. Usually I’m daydreaming, or my mind is drifting while I’m driving, going for a walk or having a shower. I “hear” a new character telling me about their day, or what’s really bugging them. Then I scramble to write it all down, because if I don’t, I’ll either completely forget or I’ll lose their voice. For me, capturing a character’s voice is key when I’m starting a new novel. The scene where Lou is sitting in class and her Shadow Phantom of a teacher is handing back spelling tests, was my first entry and what’s in the book, is pretty close to the original version. I also date my writing, so Louisa Elizabeth Fitzhenry-O’Shaughnessy first came into being on May 16, 2019!

I am a pantser by nature, so I never have a detailed plot outline. I love the thrill of seeing where my characters take me as I write. My very loose ending was along the lines of, “Lou feels completely alone. She hurt her friends, cursed her teacher, and wished her baby sibling ceased to exist! To make amends she writes the play of all plays to apologize.” By the time I’d written the first draft, the only significant change was that one baby had turned into two to increase Lou’s worry that two cute babies would make it even easier for her parents to forget all about her.

Hands down it was Lou. She felt so real to me and I wrote her in what I feel was a very honest way. I wanted young readers to see all her challenges, but also all her gifts too. Yes, she has ADHD and dyslexia, which makes school extremely frustrating, but she is also this creative, imaginative, compassionate girl, with big dreams of writing plays for Broadway! It was very important to me to show that a disability does not have to define you. Each one of us is a complex, wonderful, and flawed unique human being with our own struggles and strengths.

I share many of the same struggles as Lou, but I also read countless articles from sites such as: Made by Dyslexia, The Yale Centre for  Dyslexia and Creativity, ADDitude Inside the ADHD Mind, and CHADD. The following books were all great resources and I highly recommend them: Overcoming Dyslexia by Dr. Sally Shaywitz; This is Dyslexia by Kate Griggs; Super-parenting for ADD by Dr. Edward Hallowell and Peter S. Jenson MD;  and ADHD 2.0 by Dr. Edward Hallowell and John J. Ratey, MD. Dr, Hallowell has ADHD himself and runs a live Facebook question and answer session every Thursday. I highly recommend you watch it live or the recorded session. Additionally, there are loads of really informative and supportive ADHDers on social media you can search out. One of my favourite YouTube channels is, How to ADHD.

I have diagnosed ADHD and dysgraphia. Dysgraphia is the condition of impaired letter writing by hand, that is, disabled handwriting. Impaired handwriting can interfere with learning to spell words in writing and speed of writing text. My printing is still nearly illegible—even by me! Computers were a game changer. I likely have dyscalculia – that is a struggle with numbers (which is a very simple definition.) It can be harder to diagnose adults with dyslexia and/or dyscalculia as adults no longer need some of those school focused skills that made us stand out from the typical student, or we’ve learned adaptations since leaving school. When I was a child I struggled with telling the time, understanding money, knowing left from right, and I didn’t learn my times tables until I was in college. I still have trouble reading analog clocks. Thank goodness for digital!

This book is for my mom who has ADHD and dyslexia. When she was in third grade, she was told she couldn’t come back to math class until she could learn math. It was a very different time in the 1940’s and there was little understanding, proper diagnosis, or support for learning disabilities. But my mom was and is a fighter. Not only did she achieve a university degree, she went on to earn a Master’s Degree in Social Work.

Yes. Sort of. There’s one chapter title that for me encapsulates Lou’s feelings about school. It’s a dictionary definition of the word, Frustration, which is causing annoyance or upset because of an inability to change or achieve something. There’s so much meaning to that definition beyond Lou’s struggles with spelling. Lou devises a plan to change everything about herself so she can become more like her best friend Lexie, so she can stay out of trouble. Soon she finds that becoming someone else is one hundred percent frustrating, and learns to embrace all that she is. Of course, there are many bumps along the way, that help Lou see her strengths more clearly.

Jodi Carmichael is a multi-award-winning author and a champion for the underdog and for kids who think differently. Like Lou in The U-nique Lou Fox, Jodi has ADHD and celebrates the creativity, empathy, and adventurousness it brings to her life. Her other books include the YA novel Forever Julia which won The Manitoba Book Award and the Bronze Moonbeam Award, the middle-grade novel Family of Spies: Paris, and the chapter book Spaghetti is NOT a Finger Food and Other Life Lessons, which won the Silver Moonbeam Award and the Silver Benjamin Franklin Award. Jodi lives in Winnipeg, Manitoba with her family.

Award-winning author Jodi Carmichael, who has ADHD herself, affirms and celebrates those who struggle with their uniqueness and triumphantly discover its gifts.

It isn’t easy being Louisa Elizabeth Fitzhenry-O’Shaughnessy—especially with dyslexia. She prefers Lou Fox, the dream name she’ll use one day as a famous Broadway playwright. In the meantime, Lou is stuck in fifth grade with Mrs. Snyder, a total Shadow Phantom of a teacher who can spot a daydream from across the room but doesn’t know anything about ADHD. Mrs. Snyder’s constant attention is ex-cru-ci-a-ting. If only she would disappear.

Fortunately, life isn’t all a-tro-cious. There’s The Haunting at Lakeside School, the play Lou is writing and directing for her two best friends. And soon she’ll be a big sister at last. Nothing could ruin the joy of those things…right?