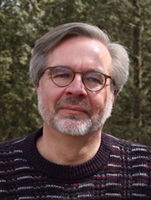 Guernica Literary Prize winner K.R. Wilson's sophomore novel Call Me Stan: A Tragedy in Three Millenia (Guernica Editions) is as ambitious as it is memorable, following the titular hero through centuries of history. Stan doesn't know why he can't die, but he knows a lot of other things after living through the sack of Rome, the medieval era, the Second World War, and everything in between, right up to the present day―where he now sits in a Toronto police station, accused of a terrible crime.

As Stan relates his unbelievable story, including his many adventures and losses, readers are taken on a whirlwind tour of history through the eyes of one ordinary, extraordinary individual. Giller winner Sean Michaels praised Wilson's historical romp, saying it read "as if Monty Python rewrote Virginia Woolf's Orlando". At its core, Call Me Stan also explores its hero's mixed blessing, which trades life everlasting for constant change and the inevitable loss of everyone he connects with.

We're excited to welcome K.R. to Open Book to discuss his unique and compelling new novel, his writing process, and more. He tells us about the indirect way in which the iconic but problematic composer Wagner inspired the book's themes, how he chose which eras of history to focus on in the vast span of Stan's life, and the most important things he learned from writing the book.

The germ of the novel was something that has puzzled me most of my adult life: the jarring disconnect between opera composer Richard Wagner’s vile anti-Semitism and his lifelong fascination with the Buddha, a figure of universal compassion, who he even wanted to write an opera about, though he never did. I felt like I wanted to write something about that, but I didn’t know what. Then at some point that idea intersected with the legend of the immortal referred to as the Wandering Jew, and the rest of the novel kind of unspooled from there.

The bulk of the novel is episodic historical fiction, so the settings were dictated by the historical periods where the narratives happen (apart from the overarching present-day narrative that links them, which is set in Toronto, where I live). Some of the historical settings flowed from elements of the Wagner chapter. For example, there’s a chapter based on the debunked notion that the Norse gods–the subject of Wagner’s Ring cycle–were refugees from the fall of Troy. Others were periods I just found interesting, like the chapter where Stan travels with Yeshu of Nazareth through Galilee, or his time in a post-war Berlin cabaret. Some were both: Stan’s time in a central Asian Buddhist community obviously has the Buddha connection, but it also grew out of my fascination with the fact that there were one thriving Buddhist communities as far west of India as present-day Afghanistan, including in the Bamiyan valley where they created the monumental Buddhist sculptures that the Taliban ultimately destroyed.

Stan. Partly because, since he’s the narrator and he’s immortal—or at least claims to be—he’s the only character who consistently appears throughout the book, but also because he’s enormously fun to write. He has a wry anachronistic perspective on the various periods of history he describes to us, which I hope makes them more accessible to the reader than a drier, more earnest kind of historical fiction might.

Research played a huge part in the writing of the book, given that it’s historical fiction covering a wide range of periods. A lot of the process was just me reading and annotating books on each period, then plugging my notes into a document, then deciding which of those notes did and didn’t suit my (evolving) ideas of Stan’s part in that period, and then finally using the ones I kept as the framework for the actual writing.

I think I have a more organic sense of writing now. I’m better at balancing the story structure I start with and letting the characters tell me, as they evolve, what they’d do in the situations I put them in. Or even how important they are. There are characters who started out as minor and incidental and ended up becoming crucial to the story.

When King Priam's pregnant daughter was fleeing the sack of Troy, Stan was there. When Jesus of Nazareth was beaten and crucified, Stan was there--one cross over. Stan has been a Hittite warrior, a Roman legionnaire, a mercenary for the caravans of the Silk Road and a Great War German grunt. He's been a toymaker in a time of plague, a reluctant rebel in the Peasants' Revolt of 1381, and an information peddler in the cabarets of post-war Berlin. Stan doesn't die, and he doesn't know why. And now he's being investigated for a horrific crime. As Stan tells his story, from his origins as an Anatolian sheep farmer to his custody in a Toronto police interview room, he brings a wry, anachronistic perspective to three thousand years of Eurasian history. Call Me Stan is the story of a man endlessly struggling to adjust as the world keeps changing around him. It is a Biblical epic from the bleachers, a gender fluid operatic love quadrangle, and a touching exploration of what it is to outlive everyone you love. Or almost everyone.