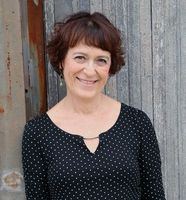 Kathy Kacer's books for young readers are not only great stories packed with memorable characters - they also serve the valuable purpose of educating readers about the Holocaust. As the daughter of two Holocaust survivors, Kacer has created invaluable teaching tools in her books, and even lectures on the topic of how to present sensitive material to young readers.

Her newest book, Masters of Silence (Annick Press), is the second instalment in the Heroes Quartet series, and sees Jewish siblings Helen and Henry hidden from the Nazis in a convent, disguised as orphans. When an informer exposes them, they find help from an unexpected source - mime Marcel Marceau. Not yet the famous figure he would later become, Marceau had appeared at the orphanage to entertain the children, but when Helen and Henry are in danger, he risks his life to protect them. A tense and compelling story of the bravery of all its characters, Masters of Silence also highlights Marceau's seldom discussed, real life service in the French Resistance.

We're excited to welcome Kathy to Open Book to discuss Masters of Silence as part of our Long Story novel interview series. She tells us about Marceau's inspiring life story that inspired the book, the power of 'speaking' without words, and her thought process behind the book's dedication.

Masters of Silence is a book inspired by the life of Marcel Marceau, one of the greatest mime artists of all time. One of the other important aspects of Marceau's life is that during the Second World War, he was a member of an underground unit that rescued Jewish children who were hiding in convents and orphanages throughout southern France. He saved the lives of about 150 children by taking them through the forests of southern France to Switzerland where he was able to get them across the border and into safety.

I had always wanted to write a story about this part of Marceau's life and as soon as I knew I was going to write this book, I immediately thought of writing it in two alternating voices - a brother and sister named Helen and Henry who have been left in a convent while their parents have disappeared. Helen's voice came to me first - strong and independent, but terrified of being left in the convent without her parents, and feeling the weight of having to be responsible for her little brother. That's where I began to write the book - the moment, in the middle of the night, when Helen has to say good-bye to her mother and face the next uncertain time of her life. I loved developing Helen's character; her strength and her vulnerability.

The ending of the book certainly evolved over many drafts. But there was one significant part of the plot that changed dramatically from my first draft to the final product. In the book, Henry, the younger brother of Helen, is so traumatized from having been left at the convent that he becomes completely mute. It's better to retreat into silence than to talk about how scared he is. Everyone tries to get him to talk - his sister, the nuns, other boys at the convent - to no avail.

One of the things the children at the convent look forward to is visits by a man whom they call the clown. That, of course, is Marcel Marceau. He visits the convent and entertains the children with his mime skits and routines. He will eventually take them out of the convent and lead them through the forest to Switzerland. Henry is enthralled with the clown, especially with his ability to "speak" with no words.

In the initial draft of the book, I wanted Henry to remain mute until the very end of the story when he finally speaks and steps up to help save the children when they encounter a Nazi patrol in the forest. The editors wanted Henry to speak much earlier in the story. We went back and forth around this for quite some time and I finally reconstructed the plot so that Henry does speak earlier and is able to talk while the children are on their journey.

I think the plot is very powerful in this construction and the tension is high. However, there are days when I still wonder if my earlier draft might have worked even better!

There is a huge amount of research that went into writing this book. And I have to admit, one of the reasons I love writing historical fiction is because I love researching history, particularly history about the Second World War.

While so much has been written about Marcel Marceau after the war in his journey to become a famous mime artist, I had to dig to find what is written about Marceau during the war when he was a member of the underground. I needed to understand his motivation for wanting to help in this way. I discovered that he also forged documents for the children he was smuggling to the border - documents that gave them different names and backgrounds. I discovered that he taught the children how to mime so that they could stay silent in the forest and still communicate with one another. Then, of course, I had to research what it was like to be a hidden child in southern France during the war.

I read books about Marceau and his life as well as books on hidden children during the war. I searched through documents and letters on the internet. And I watched dozens of videos of Marceau performing as a mime artist and speaking about his life. The world is so fortunate to have those videos available now that Marcel Marceau is no longer with us.

I always have a great sense of satisfaction when I finish the final draft of a book. The changes are done and I can walk away from it gratified that I've done it and proud of having constructed what I think is a great story. At the same time, I'm always a bit sad to leave my characters, particularly when I've grown to love them so much as was the case with Masters of Silence.

Usually, I celebrate the end of my writing by taking a break. A bit of retail therapy also helps a lot!! In this case however, there wasn't much time for a breather. Masters of Silence is part of a four-book series called The Heroes Quartet. Each book focuses on someone who rescued Jewish people during the Second World War and the Holocaust. So as soon as I finished the final draft of this one, it was on to thinking about the next rescuer that I wanted to write about. Perhaps I'll take a real break once the four books are done.

This book is dedicated to my brothers-in-law and my sisters-in-law. I'm so lucky to come from a large family. I've dedicated previous books to my husband, my children, and my many nieces and nephews. It was time to acknowledge the in-laws. They always support my writing, read my books, and feed me on Friday nights when we gather for family dinners.

Kathy Kacer has a Master’s degree in Psychology and worked for many years with troubled teens and their families. She stopped working full time in 1995 to pursue her dream of becoming a children’s author. That dream came true with the publication of her first book, The Secret of Gabi’s Dresser, in 1999. She went on to write more than twenty books, including The Night Spies, The Diary of Laura’s Twin, To Hope and Back, Hiding Edith, the Whispers series, and The Magician of Auschwitz. Many of her books have won awards in Canada, the United States, and Israel. Her books have been sold in over twenty countries around the world. In addition to writing, Kathy teaches at the University of Toronto (Continuing Studies). She also speaks to children in schools and libraries around the world about the importance of understanding the Holocaust and keeping its memory alive.

Silence can be powerful.

Kathy Kacer’s second book in her middle grade series about heroic WWII rescuers tells the tale of Jewish siblings Helen and Henry, and history’s most famous mime. Desperate to save her children from the Nazis, Henry and Helen’s mother takes them to France to hide in a convent disguised as orphans.

Visits from a local mime become the children’s one source of joy, especially for Henry, whose traumatic experience has left him a selective mute. But when an informer gives them up, the children are forced to flee yet again and the mime—a not yet famous Marcel Marceau—risks everything to save them.

Masters of Silence shows award-winning author Kathy Kacer at the top of her craft, bringing to light the little-known story of Marceau’s heroic work for the French Resistance. Marceau would go on to save hundreds of children from Nazi concentration camps and death during WWII. In characteristic Kacer style, Masters of Silence is dramatic and engaging, and highlights the courage of both those rescuing and the rescued themselves. Wenting Li’s chapter heading illustrations and evocative covers provide the perfect visuals for the series.