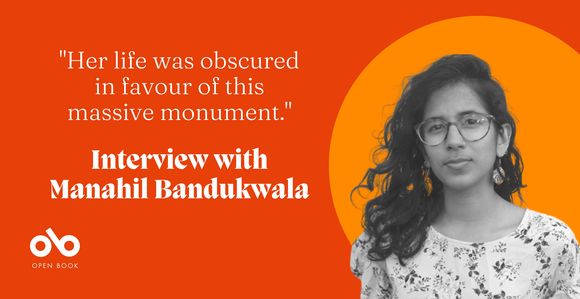 One of the most iconic landmarks in world history, the spectacular Taj Mahal, was famously built by Mughal emperor Shah Jahan to house the tomb of his favourite wife. A romantic story; a favourite tourist backdrop – and that is where the conversation usually ends. But the woman who inspired the Taj Mahal's construction, whose name is not even always mentioned in its discussion, Mughal Empress Mumtaz Mahal, was a fascinating figure whose legacy stretches far beyond a building, even one as singular as the Taj Mahal.

In MONUMENT (Brick Books), Manahil Bandukwala gets to the truth of Mumtaz Mahal, a woman with enormous political influence, who was known to intervene on behalf of the poor in her husband's court, and to sponsor poets and academics as a patron. Though history relegated Mumtaz to be remembered only as her husband's beloved, Bandukwala brings the woman to the forefront, speaking directly to her in the poems, exploring ideas of love, empire, and—crucially in the case of Mumtaz, who died while giving birth to her 14th child—bodily autonomy and women's bodies.

We're excited to welcome Manahil to Open Book today as part of our Line & Lyric interview series for poets, to speak about MONUMENT. She tells us how Star Wars and video games became a useful complement to her academic research process, why it was essential for her to address Mumtaz directly in the poems, and how (and why) her original idea of what she was going to explore in the collection changed as she wrote.

The title MONUMENT comes from the Phyllis Webb epigraph that opens the book. When I read the line: “Moments are monuments,” I saw the title(s) emerge, layered over each other. The title can be read as “Moment,” “Monument,” or my friend Sanna Wani’s preference, “Monumoment.”

The word “monument” only appears in one poem, “Flow,” but this collection began with monuments and the disintegration of them. When the tangible monument crumbles, moments are what remain, permanent.

MONUMENT is entirely built on research. I read about Mumtaz Mahal’s history and life, though there was very little information that was not related to the Taj Mahal. I researched Mughal aesthetics, architecture, and historical events for accuracy of the details presented in the poems. I wrote this collection during my undergrad and edited it during my Masters, which meant I had access to resources from my universities’ libraries. This access was instrumental to the books and articles I could immerse myself into in order to make the details of this collection as factual as possible.

When I realized there were enough poems for a full-length poetry collection. I didn’t intend to write a full collection when I started writing, but as I researched more, I had more to write about. I was still learning a lot about myself as a writer and poetry in general, so it was surprising to me that, without intending to, I had a book.

I write poems with a group of friends, and we call ourselves “VII.” The people in this collective are: Ellen Chang-Richardson, Conyer Clayton, nina jane drystek, Chris Johnson, Margo LaPierre, and Helen Robertson. Before I sent my book manuscript to any publisher, I sent it to my friends in VII, and that was an incredibly affirming and wonderful thing to be able to do. With their feedback and encouragement, I had a manuscript to send to Brick Books.

My friend and fellow poet, Sanna Wani, published her debut poetry collection, My Grief, the Sun with House of Anansi in 2022 as well. The two of us swapped our manuscripts when we were editing our respective collections. The ordering of poems in the book you’re reading is largely Sanna’s suggestions, and the book is better for it!

Soraya Peerbaye’s Tell: poems for a girlhood. It was by chance that I was reading Tell at the same time as I decided I wanted to write about empresses of the Mughal Empire, but Tell has been incredibly formative for the writing of this book. I returned to Tell during the editing process, five years after I had written my first few poems about Mumtaz Mahal.

I re-read Mohsin Hamid’s Moth Smoke for the insight with which Hamid portrays Mumtaz in his novel. I played video games like Civilization VI and built the Taj Mahal. I watched Star Wars Episode III: Revenge of the Sith, and thought about similarities between Mumtaz Mahal and Padme Amidala both dying in childbirth. The book interacts with a lot of different art forms. If I wrote this same collection today, I would definitely be drawing on the art I’m surrounded by at this current moment in time.

The “I” in these poems is deliberately myself, Manahil, writing to Mumtaz Mahal. I knew from the beginning that this was a collection that called for the specificity of the “I” voice. This was something I learned from Peerbaye’s Tell, where she states the importance of situating herself as witness when writing a book about a real person. Although the subject matter of MONUMENT is very different from that of Tell, I knew it was a valuable approach through which I could write about a historical person while discussing sensitive topics such as abortion and sex education.

The exceptions to myself-as-the-speaker are in the sections “Love Letters” and “Last Words?” In “Love Letters,” the font colour is a lighter grey, and the “I” of the poems is Mumtaz Mahal. These are some of the last poems I wrote for the manuscript. After writing questions to Mumtaz Mahal, questions that often wondered about the nature of the love she shared with Shah Jahan, I felt it was necessary to think through her perspective on this grand love. The lighter grey font returns in “Last Words?” which is a series of erasure poems written using the documented last words of Mumtaz Mahal.

Was there a question or questions that you were exploring, consciously from the beginning or unconsciously and which becoming clear to you later, in this collection?

I set out writing these poems with the idea of writing about how we view love and gestures of love. The Taj Mahal is famous for being one of the greatest symbols of love in the world, but I realized I knew nothing about the person for whom it was built. Her life was obscured in favour of this massive monument. As I researched and learned more about Mumtaz Mahal, my attention turned towards the fact that she died during the birth of her fourteenth child. From here, I started thinking about how birth control, maternal health, and sex education might have saved her life. I ruminated on how things weren’t so different now in terms of sex education and abortion access. Lastly, there was no way I could write about this aspect of Mughal history without discussing the notion of empire as a whole.

Manahil Bandukwala is a writer and visual artist originally from Pakistan and now settled in Canada. In 2021, she was shortlisted for the bpNichol Chapbook Award. She works as Coordinating Editor for Arc Poetry Magazine, and is Digital Content Editor for Canthius. She is a member of Ottawa-based collaborative writing group VII. Her project Reth aur Reghistan is a multidisciplinary exploration of folklore from Pakistan interpreted through poetry and sculpture. She holds an MA in English from the University of Waterloo. MONUMENT is her first book.

MONUMENT upturns notions of love, monumentalisation, and empire by exploring buried facets of Mumtaz Mahal’s story. The collection layers linear time and geographical space to chart the continuing presence of historical legacies. It considers what alternate futures could have been possible. Who are we when we continue to make the same mistakes? Beyond distance, time, and boundaries, what do we still carry?