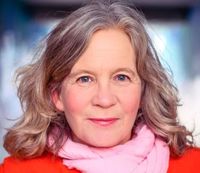 Despite the input of well meaning people (and sometimes even ourselves), we cannot always choose who we love. The nature of love, whether you consider it a feeling, an act, an experience, or otherwise, involves some measure of mystery to every connection—in families, couples, friendships, and more.

And there's perhaps no better writer in Canada to delve into this mystery than Lisa Moore, whose novels and short stories consistently show a writer who is uniquely able to explore the intricacies of the human heart with subtlety, wit, and wisdom. Her new novel, This is How We Love (House of Anansi Press) follows 21-year old Xavier, and his mother Jules. As the storm of a century rages in Newfoundland, Jules battles her way to the hospital where Xavier lies in crisis following a vicious attack.

As we are taken into the stories of how Xavier and Jules arrived at this fateful day, we fall through a rabbit hole of questions about love, what we owe one another, what family truly is, and more. A masterful book that goes boldly into our most tightly held anxieties, fears, and longings about who and how we love, This is How We Love is an unmissable read.

We're excited to welcome Lisa to Open Book today to discuss it. She tells us about how the ending of the book changed over time (and how writing endings actually works), how a very literal touchstone helped her focus while writing, and how one particular Bob Dylan song informed her writing process. 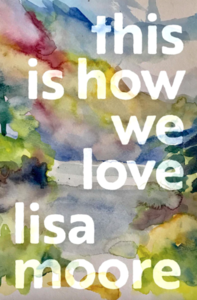 Only a little bit – I had a scene at the end where a child who has been in a life-threatening situation throughout the novel is seen in a family video tipping backwards off a rock, with his arms folded across his chest, into the river. His toes lift first and then his heels and he falls. The video is seen in slow motion, and in fast forward and reverse. The character falls into the water and is enveloped, buried in the roiling glassy water and then in reverse, bursts back out and is seen standing on the rock, back to the river, dry and untouched, resurrected. By the end of the novel, Melanie Little, my editor, pointed out it was perhaps an extraneous scene. And it really was. I was grateful to her (as I was throughout the whole editing experience, like, eternally grateful!). But I think that image got me to the ‘real’ end. It’s a thing writers do sometimes, I think, write the ending of a short story, or even a novel, and then tack on another scene to really ‘explain,’ to the reader, yup, this is the end alrighty, in case you missed it. But the end should probably come as a surprise, that afterwards, after a beat, feels right.  The ending I cut was a personal touchstone or image for writing all the other parts of the novel. And by the end, I didn’t need it.

There’s a character called Mary Mahoney who is a foster mother, she’s fostered a number of children – she is a stiff, morally upstanding, hardened woman who nevertheless has a Cassandra-like understanding of children, especially children who are banished from security, or love – and knows intuitively how to give them what they need. I don’t know where this character came from. She’s certainly flawed but she’s strong and able. She has a no-nonsense brand of love that is durable, a protective force field. She was very present for me whenever I wrote about her, but also a complete stranger – like no one I know in real life.

I wrote about Snowmageddon, as it was called here in Newfoundland, a snowstorm that shut the province down for more than a week, and caused a state of emergency, left people buried in their houses, people opening a window on the second floor of their homes and tobogganing down to the street on their bums, the only way to get out! I was alone in a downtown St. John’s house for the duration of the storm. Everything rattled and I thought the windows might blow out. I thought the storm would enter, tear me down. When I was writing the novel, I looked back at pictures and videos of the storm – research! – and realized, yes, it really was that powerful and terrifying, and it really was even worse than I remembered, and that I’d never experienced anything like it, and yes, Virginia, there is a climate crisis, there really, really is.

I bought a new piece of jewelry, a stone for a chain I wear around my neck. I try to buy a new stone (something cheap, or maybe glass) for every project, and then, when I’m being lazy or slacking off, I touch the stone, or remember it’s there, and get back to work. This may not sound like a celebration! There will be a shared book launch here in St. John’s, Newfoundland with author Diane Carley. She is publishing her first collection of stories called Bodies in Trouble, and it’s soooooo good. It’s an amazing collection. Love child of Raymond Carver and Alice Munro. So rich emotionally, and taut and spare, and gorgeous. The book launch will be a celebration!

I dedicated this novel to Sarah MacLachlan and Melanie Little. Sarah was the publisher at Anansi when I began to publish there. We’ve worked together for twenty years. She has become a very close friend. She has what appears to be an effortless generosity, by which I mean generosity flows out of her very pores. And she is honest and straight shooting, always. Sometimes I have begged: Couldn’t you lie just a little bit! But she seems not to know how. She is canny about publishing, has a nose for a good story. She is more than frequently right. She is pretty much always right. She loves doing a job well, she worked with such vigor. She has just retired. Drat and drat. But she’s still my friend and she can’t retire from that. Sarah worked on the edits of early draft of this book.

Melanie Little has been the editor of my last four books. She is pure genius and working with her is a privilege and a thrill. I still can’t believe how incredibly lucky I have been. She has a magical touch and always sees the shape of a thing before I do. She sees the macro in the micro and vice versa. She’s like those car mechanics who can lay every screw and bolt and drop of oil from a car engine out on the lawn and then whips out a wrench or a magic wand and puts it all back together so it roars to life. Working with an editor over the course of four books is an intimate process, and every experience with Melanie, every email or bit of advice or phone call has been a true pleasure. It was like we linked pinkies in a pinkie swear and she promised to have my back. Any mishaps are thoroughly my own of course. But she is an incredible guide, a force. I love her! I love them both. I consider myself wildly and unfathomably lucky to have had the opportunity to work with them.

No, no epigraph. But I listened to Bob Dylan’s A Hard Rain Is Going to Fall over and over while I was writing the novel. I listened while jogging in the woods and walking on the barrens. The song is absurdist and harrowing, about being a parent – or that’s how I heard it. Dylan asks: Where have you been my darling young one? And the child (I assume it is a child) has seen astonishing things and horrific things and travelled far. This captures what it means to care for a child, knowing that the world we leave behind should be better than the world we came into – but is it? The song is a reckoning. A calling to account. Dreamlike and nightmarish. And some parts of this novel are those things too – a casting back, and asking the next generation what do they see – because whatever they see, it’s partly what my generation left in its wake.

I learned that thing that I have to relearn every time I try to write a book. There is an urgency, an intensity, the desire to get it all down really, really fast, before it all evaporates. I can always just barely see the shape of it racing ahead of me, turning the corner in the dark and the next corner and the next, though I am fast on its heels – this is the story I’m talking about, as if it exists without me, and I just have to catch up to it. But no matter how fast I write, writing a novel takes forever. I guess what I learned, or relearned (because I cannot keep this thought in my head for very long) time spent writing is an unpredictable, wily, unmeasurable entity, and maybe doesn’t even exist. Maybe writing is outside of time. Heard somebody say on the radio that time was a material. Like, a physical material, with physical properties. Doubtful!

Lisa Moore is the acclaimed author of the novels Caught, February, and Alligator; the story collections Open and Something for Everyone; and the young-adult novel Flannery. Her books have won the Commonwealth Writers’ Prize and CBC’s Canada Reads, been finalists for the Writers’ Trust Fiction Prize and the Scotiabank Giller Prize, and been longlisted for the Man Booker Prize. Moore is also the co-librettist, along with Laura Kaminsky, of the opera February, based on her novel of the same name. She lives in St. John’s, Newfoundland.

This Is How We Love

From the celebrated author of February and Caught comes an exhilarating new novel that asks: What makes a family? How does it shape us? And can we ever really choose who we love?
As the snowstorm of the century rages toward Newfoundland, twenty-one-year-old Xavier is beaten and stabbed in a vicious attack. His mother, Jules, must fight her way through the shuttered streets of St. John’s to reach the hospital where Xavier lies unconscious. When a video of the attack surfaces, Jules struggles to make sense of what she sees in the footage — and of what she can’t quite make out.

While Xavier’s story unfolds, so, too, do the stories that brought him there. Here, across families and generations, are stories of mothers, fathers, sisters, and brothers; of children cared for, neglected, lost, and re-found; of selfless generosity and reluctant debt. Above all, Moore, in the inimitable largesse of her art, paints a shimmering portrait of the sacrifice, pain, and wild joy of loving. A tour de force of storytelling and craft, This is How We Love brings us a cast of characters so rich and true they could only have been written by Lisa Moore.