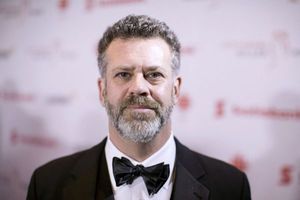 At a televised gala in Toronto last night, Michael Redhill was announced as the 2017 winner of the $100,000 The Scotiabank Giller Prize.

From a strong five-book shortlist, Redhill's novel Bellevue Square (Doubleday Canada) was the one that captured the judges' hearts and the 24th Giller Prize - the first to be awarded after prize founder Jack Rabinovitch passed away in August 2017. His daughter, Elana Rabinovitch, presented the award to Redhill.

The second time's a charm for Toronto-based Redhill, who was nominated for his novel Martin Sloane in 2001. The jury praised Bellevue Square as "warm, and funny, and smart," filled with "complex literary wonders".

The novel follows Jean Mason, who discovers that a woman who looks exactly like her has been spotted in the titular park, in Toronto's Kensington Market. You can read an excerpt of Bellevue Square on the Penguin Random House Canada website.

The other nominees were Eden Robinson (who recently won the $50,000 Writers' Trust Fellowship and was a favourite for the Giller as well), Rachel Cusk, Ed O’Loughlin, and debut author Michelle Winters. Each of the finalists takes home $10,000 in recognition of literary excellence.