Everything in Justine's world has changed since her parents got divorced. She and her little sister Bea travel across Montreal from one house to the other, living two lives. But when Justine's mother announces she needs Justine's help gathering 'evidence' to support her case for sole custody, Justine's already complicated life becomes truly confusing, leaving her with big questions to answer.

Monique Polak's smart, empathetic, and relatable new middle grade novel, For the Record (Owlkids) is the story of a family going through something common but incredibly difficult. Each character is shown as both loving and flawed, from Justine's mother's anxiety that pushes her to control everything, to her father's imperfect but determined care for his daughters. And Justine shines as a real, clever, brave young girl navigating the competing forces of love, loyalty, and honesty.

We're excited to welcome Monique to Open Book to discuss For the Record, a book which can help young readers who are navigating divorce or conflict in the family themselves and can nurture empathy in those who haven't experienced anything similar.

She tells us about what motivated her to explore the concept of parental alienation in fiction, how writing gives her a "break from being Monique", and why you might find her hidden under the covers in her bed for part of her writing process (but not for long). 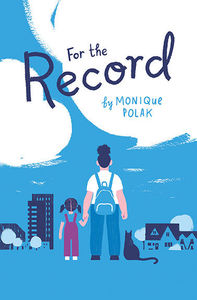 My new middle-grade novel is For the Record (Owlkids). The story is about a girl named Justine and her little sister Bea. The girls’ parents have recently gotten divorced, and now Justine’s mom wants full custody of her daughters. Justine loves both her parents, but somehow ends up taking her mom’s side. The title For the Record comes from a legal term, but is also a reference to the fact that Justine is taking notes about everything her father does wrong –  from letting his daughters eat white bread, to swearing when he’s caught in traffic and the girls are in the car.

I have been teaching English at Marianopolis College for more than thirty years. During that time, I’ve heard many stories about difficult divorces and how they impact kids. I’ve also observed how some kids – like Justine – get caught up in the conflict between their parents. I know how hard that can be for kids. My sister Carolyn is a family law lawyer here in Montreal – and we’ve talked a lot about an issue called “parental alienation” in which one parent, sometimes unconsciously, turns a child against the other parent. Carolyn has been urging me for years to write a book exploring this issue – that it’s a widespread problem that needs to be talked about because of its devastating impact on young people.

I think my message to kids – not just in this book, but in all my books – is that you have to be yourself... but that there are lots of bumps and turns on the road to finding out who you are. And that that’s not only normal, but good. As for kids whose parents are in conflict, perhaps because of a divorce, or perhaps for other reasons, that it’s not your problem to work out, or fix. That you need to leave all that mess to your parents. And that you might, like Justine will find herself having to do, tell your parents to back off! And that if that’s too hard to do, to get some outside professional support from a counsellor.

You can probably already guess the character I relate most to is Justine. I named her Justine because she believes – as I think most kids do – in justice. Justine is a serious kid. So was I. She also takes on a lot of responsibility, which I tended to do too when I was growing up. But the problem with Justine is she gets too invested in other people’s problems – and she ends up somehow losing herself. All that has happened to me too.

In fact, it was only after I finished writing the book, and I was rereading it, that I suddenly realized that when I was about Justine’s age, I had gone through a similar experience! Though my parents didn’t end up divorcing, they had a rocky patch in their marriage, and I remember taking my mom’s side. But mostly I remember that after a few months, I started to resent what was happening. I think I realized it wasn’t appropriate for me to be caught in the middle of my parents’ conflict. I remember feeling angry with my mom for involving me.

I don’t need much! Definitely pen and paper! Once, because I was traveling and didn’t have a laptop at the time, I wrote most of a manuscript while sitting on a rock! (Mind you, it was a giant rock on a beautiful quiet beach.) I do like the house to be quiet when I write. I also like it to be tidy! One of my rituals happens to be tidying up before I sit down at my desk. Another ritual is going for a run. I get some of my best ideas for my stories when I am running – or when I am taking a shower afterwards. These days, I write on a laptop, but my pen and paper are always nearby because I’m constantly writing notes and reminders to myself!

For me, the hardest part is the rewriting. I think I rewrote For the Record at least a dozen times – and those rewrites weren’t just a matter of changing up commas and exclamation marks – those were major rewrites in which I delved deeper into my characters and their relationships. Here’s how I cope with the biggest setbacks – such as when I get a long list of things that need fixing in my manuscript: I crawl into bed and pull the covers over my head. Then I allow myself to sulk and generally feel sorry for myself. I don’t think in all these years I’ve ever spent more than an hour sulking under the covers. But I wait until I’m good and fed up with myself for sulking – then I get out of bed and start the rewrite!

I have a lot of favourite parts. Not the rewriting – as I’ve mentioned above, because it’s so darned hard and it takes a lot of patience, which is not my strong suit. My favourite parts – coming up with the idea! Then especially coming up with my main character – I know the character is coming to me when I hear her voice in my head. This part for me is a little like falling in love! Also, I like getting a break from being Monique – when I was writing For the Record, I became Justine. I also really like working quietly on a story. But I have to admit the best part of those workdays could be when they are OVER and I can enjoy the feeling of HAVING WRITTEN!! Revising is hard; working with an editor is a huge privilege, but is sometimes hard. Promoting and discussing the book are a blast. I love love love talking to kids. In fact, I’m pretty sure I prefer talking to kids to talking to adults!

I am completing a nonfiction book about science! It’s a big stretch for me since I’ve never been the science-y type. But I love challenges and learning new things. Also, my boyfriend is a scientist, so he’s been inspiring me behind the scenes. I have done several nonfiction projects. Despite the intellectual stimulation, I have to admit I’m starting to miss the feeling of working on fiction. I’m hoping a new narrator will pop into my head soon!

Monique Polak is the author of over twenty-five books for kids and young adults including the nonfiction book for teens, I Am a Feminist: Reclaiming the F-Word in Turbulent Times and the Quebec Writers Federation Literature Prize winner, What World is Left. Monique teaches English literature, creative writing, and humanities at Marianopolis College in Montreal, Quebec

A middle-grade novel thoughtfully explores the realities of parents’ divorce

Twelve-year-old Justine’s parents are recently divorced. She and her little sister, Bea, go back and forth between their parents’ homes in Montreal. Their mother, whose anxiety manifests as the need to control, believes that their father and beloved half-sister are a bad influence on Justine and Bea. So, she enlists Justine in collecting evidence that would lead to getting sole custody.

Justine accepts her mother’s view of her father at first and begins writing detailed notes about his behavior: He doesn’t stick to Bea’s strict bedtime. He’s late dropping them off at school. He makes sandwiches with white bread. But when Justine crafts an outright lie for her mother’s court case, she starts to question her mother’s behavior, and her own.

This thoughtful, supportive look at parental alienation and its impact on children tenderly balances this difficult topic with moments of joy, love, and connection. Throughout the book, Justine’s clever, unique voice guides readers as she navigates complicated family dynamics and summons the courage to tell the truth, no matter the consequences.