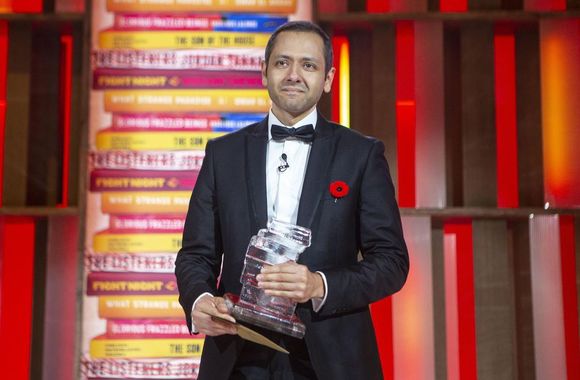 Last night, at one of the first in-person literary events since the beginning of the pandemic, novelist Omar El Akkad was announced as the winner of the $100,000 2021 Scotiabank Giller Prize.

El Akkad, who was born in Egypt and raised in Qatar before moving to Canada as a teen, now lives in Portland, Oregon with his wife and child. His winning book, What Strange Paradise (McClelland & Stewart), tells the story of nine-year-old Amir, the sole survivor from a wrecked ship of refugees fleeing to a small island nation.

Taking the stage at Toronto's Park Hyatt Hotel upon the announcement of his big win, El Akkad was gracious and charming, giving credit to his fellow nominees and expressing his disbelief. "I've had the incredible honour of being mentioned in the same breath as four outstanding authors, any of whom could be standing up here right now...I didn't think I had a chance in hell of winning," he said. "This is by far the greatest honour in my career."

The other finalists for this year's Giller Prize were Miriam Toews for Fight Night , Angélique Lalonde for Glorious Frazzled Beings, Cheluchi Onyemelukwe-Onuobia for The Son of the House, and Jordan Tannahill for The Listeners.

El Akkad is already a decorated fiction writer after his debut novel, American War, won the Pacific Northwest Booksellers Association Award, the Oregon Book Award for fiction, and the Kobo Emerging Writer Prize, as well as being a CBC Canada Reads contender.

The jury praised What Strange Paradise for its empathetic, fictionalized depiction of a refugee crisis, saying "Amid all the anger and confusion surrounding the global refugee crisis, Omar El Akkad's [novel] paints a portrait of displacement and belonging that is at once unflinching and tender... In examining the confluence of war, migration, and a sense of settlement, it raises questions of indifference and powerlessness and, ultimately, offers clues as to how we might reach out empathetically in a divided world."

Elana Rabinovitch, the daughter of Giller Prize founder Jack Rabinovitch, and Scotiabank's executive vice president and chief marketing officer John Doig presented the award together to El Akkad. Scotiabank has sponsored the prize since 2005. Jack Rabinovitch founded the prize in honour of his late wife Doris Giller in 1994. He passed away in 2017 at the age of 87.

The gala was co-hosted by poet Rupi Kaur and actor Paul Sun-Hyung Lee, and included a musical performance by Measha Brueggergosman Lee and the Denzal Sinclaire Quartet. 2021 marked the return of the gala, often considered the crown jewel of Toronto literary event calendar, after the 2020 gala was virtual due to the pandemic. All attendees were required to show proof of vaccination and photo ID upon entry.