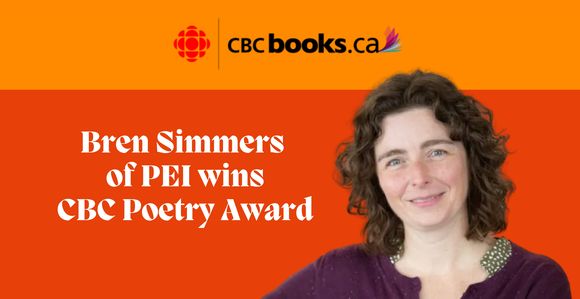 For the first time ever, a writer from Prince Edward Island has won the prestigious CBC Poetry Prize.

Bren Simmers was awarded the $6,000 prize today for her poetry collection Spell World Backwards. The prize money comes courtesy of the Canada Council for the Arts.

Simmers will also receive a writing residency at the Banff Centre for Arts and Creativity as part of her prize, and her winning poems have been published online at CBC Books.

Her suite of poems explore the connection between Alzheimer's and language, inspired by her experiences with her mother, who was diagnosed in 2017. As a writer, Simmers noted the way in which the illness effected her mother's ability to communicate. In the poems, she translates onto the page her mother's growing linguistic idiosyncrasies, exploring both language itself, included what can still be constructed when many linguistic building blocks are missing, and the loss and grief of cognitive decline.

The series highlights the mother-daughter bond as well as the connection between family and memory.

Spell World Backwards was selected by jurors were Armand Garnet Ruffo, Megan Gail Coles, and Hoa Nguyen from a longlist of 26 writers. The longlist was selected by a team of writers across Canada, who collectively read over 2,200 entries.

Simmers, who has published four books, said in a statement to CBC Books that she was "incredulous and so grateful...[I] never thought it would happen. I know my mom would be proud too. She used to carry my poems in her purse and show them to people in the grocery store."

Simmers books include the wilderness memoir Pivot Point and Hastings-Sunrise, which was a finalist for the Vancouver Book Award. Her most recent collection of poetry is If, When (Gaspereau Press). She was previously longlisted for the CBC Poetry Prize in 2013 for I Blame MASH For My Addiction To MLS and in 2012 for Science Lessons.

The other four finalists are Rachel Lachmansingh of Toronto for From the Mouth, Brad Aaron Modlin of Guelph, Ont., for To the Astronaut Who Hopes Life on Another Planet Will Be More Bearable, Luka Poljak of Vancouver, for Mouth Prayers and Kerry Ryan of Winnipeg, for Grief white. They will each receive $1,000 from the Canada Council for the Arts.

The CBC Literary Prizes was first awarded in 1979 and has become one of the most prestigious prizes in the country, with past winners including Lorna Crozier, David Helwig, and Suzanne Buffam.