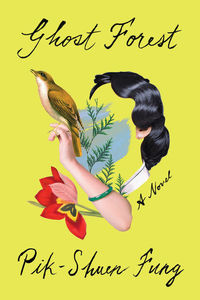 Fung won the 46th edition of the prestigious prize, which is open to any first time novelist, including writers who have previously published books in other genres.

Fung's big win was announced at an in-person ceremony at The Globe and Mail Centre in Toronto. The prize comes with $60,000 for Fung, sponsored by Amazon Canada.

Ghost Forest tells the story of an unnamed protagonist, uneasily grieving her father's death. Her father was one of Hong Kong's so-called "astronaut fathers", men who stay to work in their home country while their wives and children emigrate elsewhere.

Fung was born in Hong Kong, raised in Vancouver, and currently lives in New York City. Ghost Forest has been snapped up for publication in numerous countries and earned positive reviews in The New York Times Book Review, TIME, The Chicago Review of Books, and others, and from fellow authors including Ann Patchett and Madelaine Thien.

Five other authors were also nominated. They are: Emily Austin for Everyone in This Room Will Someday Be Dead (Atria); Lisa Bird-Wilson for Probably Ruby (Penguin Random House Canada/Doubleday Canada); Brian Thomas Isaac for All the Quiet Places (TouchWood Editions/Brindle & Glass); Conor Kerr for Avenue of Champions (Nightwood Editions); and Aimee Wall for We, Jane (Book*hug Press). Each finalist received $6,000 from Amazon for their nomination.

17 year old Caitlin Mah won the Youth Short Story category for "Mei-Ying, the Heavens are Crying." Mah will receive both a $5,000 prize and a mentorship with the editors of The Walrus magazine, which presents the Amazon First Novel Award with Amazon Canada.