Booker nominated writer Patrick McCabe is a modern Irish literary treasure, with titles like The Butcher Boy and Breakfast on Pluto in his personal library (both of which were adapted into acclaimed films). So it's a major event when a new McCabe novel comes along, and Poguemahone, published in Canada by Biblioasis, is one of his most exciting yet. A major—and fascinating—literary experiment, the entire novel is told in a single epic free-verse monologue from Dan, the brother of the mysterious Una Fogarty, a woman who is slowly being lost to dementia.

With McCabe's signature pathos and dark wit and his unmistakable insight into the Irish experience, Poguemahone plays with the tradition of the verse novel, pulling in Beat influences, Irish folklore, drinking songs, and more to tell the story of a singular, complicated woman and her fateful family history. Its title is a clue to McCabe's aesthetic, which is laced with humour and irreverence—the Irish phrase póg mo thóin, from which the title derives, essentially translates to "kiss my ass".

We're honoured to share an excerpt from this revolutionary novel, courtesy of Biblioasis, here today, in which we get a glimpse into Dan's voice (which deftly features untranslated words from the Irish language) and his loving but complicated relationship and history with Una.

Excerpt from Poguemahone by Patrick McCabe: 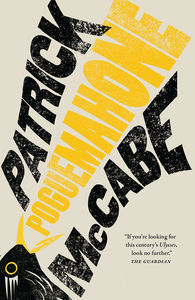 In recent times I’ve taken to noting
the various different species.
They say that the blackbird and the song thrush
they’re the superior singers of early Springtime.
& maybe ’cos of that
it’s when I hear my sister singing
like she often does
humming abstractedly
trilling these little notes of regret
that I often think
the pair of us
we’re not unlike a pair of
sweet little birdies ourselves.
‘No wonder you’re jealous of
Troy!’ she used to say.
Look – she’s reading one of
Troy’s favourites so she is
even after all this time
she’s still got a soft spot
for Peanuts & all that.
Charlie Brown, you’ve got a failure face.
You know that?
Why, it’s got failure written all over it.

Troy always used to like reading that to Una.
& then doing this funny twirly
dance just like Snoopy.

I can’t tell you how much she loved that
& used to sometimes say that she thought
it was that which had first
made her fall in love with him,
his love for Peanuts and his childish sense of
humour.

‘Do you know something, Charlie Brown?
If only you weren’t so wishy-washy, you could be a
prince who flies to the moon!’
She said that out of the blue
only just the other day
& then when I laughed and said:
ah yes, that old Charlie Brown!
what does she go and do
turns around and, eating the last of her
guggy egg
says: Who?

As I took her hand and clasped it to my cheek
we were always doing that
but not in any kind of unsavoury way
it’s just that she’s my sister
that’s all
& us, we Fogartys
it’s our duty to stick together
me and her against the world
like an dornán slat
the bundle of sticks
that together will remain forever
unbreakable
because once they begin to separate
they can be torn apart & will splinter
like matchwood
& flitter away
broken up
destroyed.

It’s just a pity we didn’t manage
it in the end
setting up a home of our own
under the eaves
constructed our very own
closed-cup mud nest
At Home With The Fogartys
which had always been what I’d
hoped and longed for
&, I know
so did she,
before certain tensions got the better of us
and we watched it burn
our sweet home of dreams
right there
in front of our very eyes.
Teach álainn
Dan agus Una Fogarty
Dan & Una’s
lovely, dreamy mountain home
now, sadly, nothing but a memory
but all the same,
like I promised,
I’ll always be here by her side
to watch over her
& guide her
yes, right until the sixpences are
placed upon my eyes
of that I can assure you
may God forgive me
should I play you false
this night.

Because every simple human being
has their hopes and aspirations – is that
not the case?
Yes, that’s the way
it just is, and always has been.

How marvellous, though, it would have been.
If, in some small way, it had all worked out
& the children she’d longed for
& happened upon
– quite by accident, of course
o, go deimhin, go deimhin! – that special day
out of nowhere
in Queen’s Park

if they’d only been able to remain
a little longer in our ‘Secret Nest’
maybe even stay there for good
with the pair of us
me and Una
as their parents
yes, their caring & loving
tuismitheoirí
o what kisses & presents
we’d have lavished on our own little birdies
our two wee
babogues,
Bobbie agus Ann.

Ann & Bobbie
&
Bobbie & Ann
The two lovely childre we found that day
our own little personal charges
who we thought might give our lives
meaning
after The Temple it had fallen
into ruins
with nothing remaining
for to give our lives meaning
we were sure they would save us
as we, in our turn,
might be able to do the same
for them
taking them away from their heroin-addict
mother
to our secret attic
our warm nest of sanctuary
so sweet
but, sadly however,
it didn’t work out
mostly because of my sister’s instability
& the complete & utter unpredictability
of her moods.
Some people at the time did, in fact,
mention the gruagach
Na páistí goidte, such commentators
suggested – the stolen children.
Because that’s what such entities
were reputed, in the old times,
to do.

But everyone agreed that that was ridiculous.
&, as a matter of fact,
they were right.
Because Una didn’t, in fact, steal them
that glittering Sunday afternoon in
Queen’s Park
a week after The Temple had finally folded
no, simply borrowed them for a while.
Something which the two páistí themselves
were more than glad of, let me tell you
– living, as they did, in an absolute
midden in a sinkhole estate at the
back end of Killiburn
surrounded by hyperfuckingdermics and
empty pizza cartons.
With Bobbie even saying
thank you for being so kind to us
Una
& telling us all about
The Swans Of Lough Derravaragh
where once there had lived
such beautiful swans
who had once been frightened
little children like us
finding themselves then
secure in our secret attic
enchanted & protected
given no end of sweeties and
all kinds of treats
showed
so much affection and
kindness
that Bobbie said he could
barely speak
we love you, Auntie Una!
cried Ann
as salt silver rivers came coursing
down my sister’s hollowed-out cheeks.

I ndeireadh na dála
at the end of the day
we only had them a mere
three pitiful hours
some eternal dream home, for sure!
Almost as brief & pathetic
as Troy McClory’s
alternative societies &
Hy-Brasil of a society cleansed
& entirely reformed!

No, mar adeirim,
as I say,
little Bobbie & Ann weren’t kidnapped
but just for the briefest of periods

Patrick McCabe was born in 1955 in Clones, Country Monaghan. He was a teacher and then he was not, having become a full-time writer. He is the author of The Butcher Boy, which won the Irish Times Irish Literature Prize for Fiction; The Dead School; Breakfast on Pluto and others. The Butcher Boy and Breakfast on Pluto were both shortlisted for the Booker Prize and adapted into feature films by Neil Jordan. Winterwood was named the 2007 Hughes & Hughes/Irish Independent Irish Novel of the Year. His next novel is a chillingly amusing chronicle of political and cultural life in 60s and 70s Dublin, called Watertown.

A swirling, psychedelic, bleakly funny fugue by the Booker-shortlisted author of The Butcher Boy and Breakfast on Pluto.

Una Fogarty, suffering from dementia in a seaside nursing home, would be all alone without her brother Dan, whose epic free-verse monologue tells their family story. Exile from Ireland and immigrant life in England. Their mother’s trials as a call girl. Young Una’s search for love in a seemingly haunted hippie squat, and the two-timing Scottish stoner poet she’ll never get over. Now she sits outside in the sun as her memories unspool from Dan’s mouth and his own role in the tale grows ever stranger— and more sinister.

A swirling, psychedelic, bleakly funny fugue, Patrick McCabe’s epic reinvention of the verse novel combines Modernist fragmentation and Beat spontaneity with Irish folklore, then douses it in whiskey and sets it on fire. Drinking song and punk libretto, ancient as myth and wholly original, Poguemahone is the devastating telling of one family’s history—and the forces, seen and unseen, that make their fate.