The late Harold R. Johnson was a master storyteller. He published a dozen books prior to his passing in February 2022 and was acclaimed for his fiction, which often drew on elements of his Cree heritage and played skillfully with genre, and his nonfiction, including his Governor General's Literary Award nominated memoir, Firewater: How Alcohol is Killing My People (and Yours).

His final gift to readers comes in the form of his posthumously published new book, The Power of Story: On Truth, the Tricker, and New Fictions for a New Era (Biblioasis), an exploration of the power and role stories play in culture, and in our emotional landscapes both collective and individual.

The idea for the book first came about when Johnson was approached by a multi-faith organization to speak about the power of storytelling. Johnson, whose raw and powerful writing never shied away from difficult truths, was also a man of great wit and optimism, and The Power of Story shows a writer whose final message is one of hope in dark times, offering storytelling as a potential form of healing and a force to bring people together and aid in our understanding of one another. It has already drawn widespread praise, with CBC's Shelagh Rogers saying "[Johnson's] final book is a balm for our times" and acclaimed writer Michelle Good saying that Johnson "blesses us one last time" in the form of the book.

We are proud to present an excerpt from The Power of Story, courtesy of Biblioasis, here today.

Excerpt from The Power of Story by Harold R. Johnson 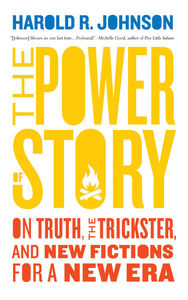 All stories can be told in multiple ways. We can choose which version we want to tell ourselves. That’s editing. We go back over our lifestory and rewrite it.

We retell it in new, better ways, healing ways. And like editing a manuscript, we can edit the story many times, as many times as we want, because what we want out of our lifestory is a masterpiece.

Okay, then, if you think you have this, let’s carry on. Let me tell you about the snake.

I was given a powerful story about snakes. I really liked it. You know how some stories can make your skin crawl? Well, this snake story would make you want to tear your skin off, throw it in a pile, and run— that’s how good it was.

The Canadian Challenge Dog Sled Race runs through here in the winter. This is one of the check- stops for that long-distance dog race. The mushers have a mandatory five-hour break here to rest their teams. It’s great. We get to host really nice people and their hard-working, determined dogs. Well, this one year, there was a young woman who came through. I knew that after her five-hour rest she would leave at about sundown and would be mushing in the dark, so I was telling her scary stories. Just little things that happened around here over the years—spooky stuff.

I thought about telling her my snake story, and something told me to be careful. It was just a sense. We have a teaching about traditional stories that says we shouldn’t tell them in the summer because telling certain stories can cause the snakes to come. But I looked around—there was three feet of snow on the ground—it was twenty below—it was the middle of February. I thought, it must be safe to tell my story— so I did.

The young woman left just before sunset. Her team looked strong as they sped out of the yard.

I like going to the Canadian Challenge Awards Breakfast held in La Ronge after the race is over. They serve a nice meal, and I get to visit with all my friends who took part in the race. The mushers get up to get their awards and prize money, and they often tell something about what happened to them on the trail. I like their stories.

Well, this young woman gets up and she tells about when she was leaving Johnson’s camp, and, all of a sudden, all her dogs turned and looked into the forest. She said she looked, too, and there was something spooky there. So, she and her team got out of there as quickly as they could.

I felt a little proud of myself. I had scared her. My conceit in my storytelling ability put a smile on my face.

When I got back here, still grinning, my wife, Joan, was cleaning up where the dogs had been bedded down. Over there beside the cabin, see that slough? In the winter when it’s frozen and covered with snow, you can park a half dozen dog teams there. I went to see if she had left anything for me to do. I met her on the trail and she said, “Did you see the snake?”

You have to know, when I met Joan, I promised her where we were going to live there were no wood ticks and there were no snakes, and here she was asking if I had seen the snake.

She said, “Yeah, at first I thought it was a bungie cord” as she kicked aside straw the dogs had used for bedding. And there it was, about eighteen inches or fifty centimetres long—green with a yellow stripe down its side—lying on the snow.

I haven’t told that snake story since.

No. I am not going to tell it to you now.

That’s the whole point of all this. I am trying to show you the power of story. If you tell a snake story, even in the middle of winter, when there is three feet of snow on the ground and it’s twenty below, snakes can manifest themselves. Stories are powerful, and we have to be careful with them.

You can go to a knowledge keeper, and they might tell you a sacred story if you ask them for help. The story is the medicine. If you play with it, if you use it frivolously, if you try to publish it and make money from it, you could harm people. That’s why knowledge keepers are careful with who they tell these stories to. It’s not about secrecy or guarding knowledge. We don’t tell these stories to just anyone who wants to lis- ten to stories because of the damage that might result if they are used improperly.

Yeah, if you could get some more wood, that would be great. There’s lots in the woodshed beside the cabin. It’s starting to get darker now, and a bright fire will help.

Harold R. Johnson (1954–2022) was the author of six works of fiction and six works of nonfiction, including Firewater: How Alcohol is Killing My People (and Yours), which was a finalist for the Governor General’s Literary Award for Nonfiction. Born and raised in northern Saskatchewan to a Swedish father and a Cree mother, Johnson served in the Canadian Navy and worked as a miner, logger, mechanic, trapper, fisherman, tree planter, and heavy-equipment operator. He graduated from Harvard Law School and managed a private practice for several years before becoming a Crown prosecutor. He was a member of the Montreal Lake Cree Nation.

The Power of Story

Approached by an ecumenical society representing many faiths, from Judeo-Christians to fellow members of First Nations, Harold R. Johnson agreed to host a group who wanted to hear him speak about the power of storytelling. This book is the outcome of that gathering. In The Power of Story, Johnson explains the role of storytelling in every aspect of human life, from personal identity to history and the social contracts that structure our societies, and illustrates how we can direct its potential to re-create and reform not only our own lives, but the life we share. Companionable, clear-eyed, and, above all, optimistic, Johnson’s message is both a dire warning and a direct invitation to each of us to imagine and create, together, the world we want to live in.