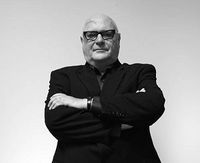 In the late John Bentley Mays' final book, The Occidental Hotel (Guernica Editions), a grizzled, racist criminal evades capture by holing up in a long-abandoned hotel, once a dazzling building that hosted the social elite of the 1950s. While there, he reflects upon the failures of the American South and the career of German performance artist "Jupp" (loosely based upon the controversial artist Joseph Beuys).

A dark and brooding character study, The Occidental Hotel is an uncompromising journey into the ravaged mind of evil, and a powerful last word from a legendary writer.

We're very excited to feature an excerpt from the novel on Open Book today.

Excerpt from The Occidental Hotel by John Bentley Mays:

The strange mid-winter weather in Düsseldorf, in the municipal district of Heerdt, where this takes place on a day in early 1956, has nothing to do with what happens. It might do so, were Jupp to notice how unnaturally dry the air is today, how it lingers, windlessly, bright and unstirring, around the dormers and angles of the elderly house his studio is in, which he does not. The weather might play a part in this narrative, were it to tempt Jupp to go outdoors, which it does not.

Drawn from inside by the afternoon’s unseasonable radiance, winter-pale tenants in the apartment block next door, the property managed by Götz, who also superintends Jupp’s house, visit on the sidewalk beside the sunny brick and plastered walls that line the narrow street. Some of those on the sidewalk say that many more days like this and the buds will be tricked into opening early. One says the birds that came from Lapland last autumn will be perplexed.

Two men in their forties, each like Jupp a veteran of the eastern front, argue about an item that has been in the news, though not recently. They are loud, but I cannot make out what they say, their accents disorient my ear, which is tuned to the standard dialect of German I learned from listening to records. But now I think I understand—the topic is rearmament, I’m sure of it—though why they are going back and forth about this old news now, after the matter has been resolved as the weapons manufacturers and the Americans wanted, I do not know. Why the men occasionally stab the still afternoon air with their fingers to drive home a point, I also do not know. Because I do not know, I can tell Alexander nothing about the matter.

An emaciated teenaged girl, who believes in nothing, has painted herself with American cosmetics so bright that she fluoresces like neon tubing. She listens to a ponderous Motorola portable radio, turned up loud, tuned to the American Forces Network, which is playing an Elvis song, just released. She stops listening to the melody for a moment, and says something I cannot make out to a husky blond youth who may or may not be her boyfriend, but is certainly not her brother. While listening to her, he throws his yo-yo toward the sidewalk, where he walks the dog on the pavement for a few instants before reeling in the toy, which has been manufactured in Luck, Wisconsin. The fabric for his shirt came off a factory loom at Spartanburg, South Carolina. His Jockey briefs are said by advertisements in magazines for young men to provide better support than boxer shorts, and the youth believes this to be true, because he feels, or thinks he feels, better support. He believes almost nothing else to be true. Begotten during his father’s last leave before Stalingrad, where the father died, the blond son was hardly more than a toddler in 1945, when the idea of National Socialism was consigned to the cellar into which victors always put the visions of the defeated. So the youth with the yo-yo grew up without that idea, but without any other idea, and now believes nothing.

A woman with a podgy bosom, but without a waist, dressed in a leatheroid trench coat two sizes too small for her—she is surely not yet forty—smokes a cigarette in public, like an American. It is 1956, so she believes nothing. She believed something—it—everything—in 1937. Agape with awe and gratitude then, she hailed what she believed with a stiffly erect right arm, when the midnight-blue, open-topped Mercedes Benz 770K bearing it heaved slowly forward on the street between police lines, and burghers and little girls and she herself acclaimed it. Then came the bombs, and what she believed disappeared into the bunker beneath the Reich Chancellery in Berlin, where it shot itself in the spring of 1945, after which date she believed nothing at all. In 1956, she thinks about the television set and other appliances she does not yet own, she washes her husband’s underwear with efficient detergents, everything is white and clean when she is done. There is nothing more to be said about her.

The Federal Republic of Germany is a normal country in Europe, one veteran of the eastern front says to the other, who replies it is not. Ten years have gone by since the Third Reich went under, so it’s time, or it is not. Adenauer did not believe in German rearmament, then he did. Now there is the menace of Russia, always that, or there is not, but some things never change, and Russia is one of them. The shorter of the two men, who lost toes to frostbite when the German army’s advance stalled before Moscow, is sure of it. The other man, standing with arms akimbo, says he saw something in a newsreel that convinced him otherwise, though he cannot say what it was, or why. (I dutifully cite the dialogue, so that Alexander will know what it means to be alive in 1956.)

The woman in the leatheroid coat interrupts the exchange of the two men to say that her husband will buy a television set if movies do not improve. I had intended to ignore her, but I cannot, because she wants a television set and says so. I am certain about this, since it is 1956 in West Germany, the citizens of which, by and large, want television sets. She also wants the body of the projectionist, aged 23, who lives with his sister three doors down the hallway, who, she imagines wrongly, shoots dice with girls for money and kisses in the projection booth while the feature ratchets through the sprockets, who told the woman in the leatheroid coat that German movies are bad and getting worse, but the American ones are the worst of all. She may have him some day, only if her husband dies or loses his mind, because she can fantasize about adultery, but cannot, owing to religious prejudices that have survived the loss of all sense of the transcendent, bring herself to plan it.

Upon hearing the woman’s complaint about the movies, the man without some toes asks: What is wrong with the movies? I don’t think they are so bad, especially the German ones about life in the countryside, maybe in the Alps or the Black Forest, like films before the war. There was one, I guess it was last year, about a farm girl who is seduced by a fancy man and goes with him to the city, but who comes home, broken-hearted, and is romanced out of her miseries and city ways by the farmer’s son, whom she marries. That was a good one, with the kind of ending I like nowadays. The scenes of the mountain valley the farm was in were outstanding, so what could be bad about that? I don’t like American movies, except for westerns.

I hear the woman start to explain her position on the movies, why she should have a television set. The youth is no longer hurling his yo-yo to within an inch of the pavement, then walking-the-dog. The girl listens to the radio.

Jupp, too, hears the voices and sounds rising from the sidewalk outside his studio’s window, but he (unlike me) does not attend to what they mean. I want to know what they are saying, so I can tell Alexander they believe in nothing. Jupp could go out. No physical impediment prevents him from leaving the studio in the decayed house built in another century, nothing material stops him from joining the neighbours who stand on the sidewalk, talking and listening to each other talking, or listening to the radio. Nothing in his body stops him from strolling slowly and alone, as he does from time to time when the weather is clement, along Am Hochhofen beside the Erftkanal, or by the row of whitewashed, buxom houses that front onto Rheinallee and the river beyond. He is not curious this afternoon about what is spoken by the people outside his window, or about anything else that transpires in Heerdt, where the tenants from next door talk in the warm air about rearmament and the movies, or about nothing. He does not care to know why his house, alone on its street, escaped destruction by the bombs.

The box was delivered an hour ago.

John Bentley Mays (June 22, 1941 – September 16, 2016) was an American-born Canadian journalist and writer. Best known as an art and architecture columnist of searing wit and insight for The Globe and Mail, Mays also published a novel and several non-fiction books, at least one of them dealing with his childhood in the American south.

A brooding fugitive hides out in a crumbling hotel that was once filled with celebrities enjoying the successes of postwar America. He is a racist with a criminal past, an anti-hero who reflects on the ruins of the South and simultaneously on the life of a German performance artist called “Jupp”. The fictional Jupp is a thinly-veiled cipher for the late real-life German artist, Joseph Beuys, and the photos in the novel are photos of the performances by the controversial Beuys. At once echoing the moody worlds of W. G. Sebald and incorporating outrageous elements of pulp fiction, this novel of dark romanticism is not for optimists seeking redemption, but for those willing to take a look into a searing heart of darkness.